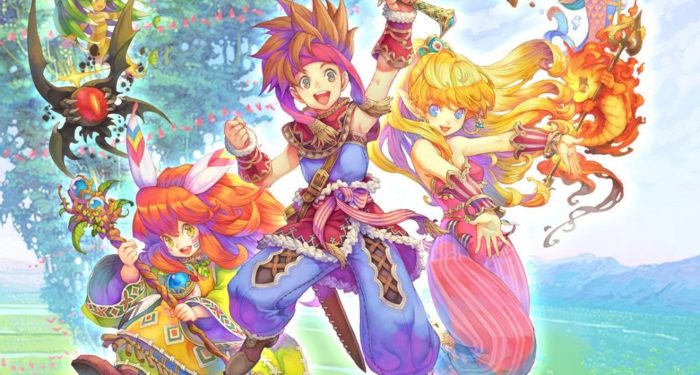 Secret of Mana on PS4

History does not repeat itself. Contrary to popular belief, it’s hardly ever true that two points in time occurred in exactly the same way. Such is the case with the 25-year-old JRPG cult classic Secret of Mana and its recently released remake. While a fresh coat of paint may not always be a bad thing, the latter doubts the greatness that the series is known for.

Devoted fans of the series will be able to tell right off the bat that this isn’t the Mana they grew up with. Square Enix seemingly had decided that in order for the franchise to fit into modern times, it needed to have a cutesy, childlike makeover filled with vibrant colors and upbeat voices. The result is a world that definitely pops off the screen, but not always in the best way. The graphical overhaul that this remake receives tries to breathe life into this aged franchise, yet winds up falling flat sometimes with textures that seem fit for iOS devices. Playing the game on an average-sized television screen, it’s almost unsightly to behold on a PS4. You’ll eventually grow used to the graphical downgrade and learn to appreciate the new art style for what it is, but that won’t be until you’ve poured a good amount of time into the game.

As far as how other presentation aspects go, voice acting is more or less on the same level, as it’s often filled with overrated lines and cheesy dialogue that distracts from the importance of the conversation at hand. This goes for both the English and Japanese language tracks, as each is filled with poorly placed words that will make you outright cringe. To make matters worse, one party member named Popoi (who follows you throughout the entirety of the game) has one of the most annoying, grating voices that I’ve heard from a video game character in recent memory. If you’re a fan of anime, this is the type usually relegated to Moe characters and the like. In fairness, there are no translation issues here like in the original Secret of Mana and everything said is understandable. It’s just unfortunate that the voice acting doesn’t deliver on quality. Oh, and mouths don’t move when characters talk, which is really weird.

Speaking of the game’s characters, the remake’s 20-hour narrative remains largely unchanged from the tale we were all introduced to decades ago. The story of a spiky-haired boy named Randi and his journey to remedy a mistake he made by pulling out a mystical sword stuck in stone surprisingly stills holds up today. His quest to rid the world of the monsters, evil empires, and world-ending dragons he unleashed alongside support characters Primm and Popoi isn’t the most unique redemption arc in video game history, but it works well enough to move the title along. The added opportunity that players get to experience the characters bond, mainly in chatting over dinner while staying at one of the game’s many inns, helps flesh out the relationships they have with one other and pad out the pacing a little bit. Indeed, fans of the genre that have grown tired of long, empty moments in between action can rest assured knowing that the Secret of Mana remake retains the quick pacing of the original. Randi will be on his journey and in the thick of things roughly 10 minutes from picking up your controller, which is a bit of a departure from other JRPGs on the market right now.

Having gameplay that’s up to par with the speed the narrative sets is key, and unfortunately it’s here where most of the remake’s flaws can be found. The top-down, open world battle system of the original has been kept largely intact, though there are a few more hiccups this time around. Players are given a charge meter that fills automatically over time, giving them the choice of either getting in a couple of quick, short slices repeatedly or waiting a little bit to unleash a more devastating blow through specials or magic attacks when the time’s right. This all sounds like a satisfying gameplay loop on paper, but glaring deficits that keep the battle system from delivering on its potential lie in poor hit detection and the inability to actually evade incoming attacks. Whereas it is somewhat enjoyable to learn an enemy’s sweet spot, attack, and retreat, the repetition gets old fast. It’s made worse when you discover that no matter what you do, the enemies you’re up against just won’t die. On top of that, foes will be able to hit you from way further than you originally thought, meaning you’ll have to backtrack significantly to get out of the way of danger and heal. It’s annoying to the point where it’ll test your patience in a bad way. There are difficulty spikes towards the later end of the game too, meaning you’ll have to channel your inner virtue should you want to beat Secret of Mana with your sanity intact.

Don’t count on your AI companions to make up for any of the time, by the way. While more capable than those in the original, they still find themselves getting needlessly KO’ed in an area full of enemies after running against a wall and failing to go down staircases. Needless to say, be prepared to do most of the fighting yourself. Also, it’s worth noting that you won’t be able to move to new areas if a party member is glued to said walls, meaning you’ll have to go back to make sure they’re following you, putting yourself in harm’s way over and over. It’s like an escort mission, only repeated constantly. It’s hard to see how anyone could call themselves a fan of that.

All of this being said, it would be a stretch to say that this remake is virtually unplayable. There are some nice elements absent from the original thrown in the mix to make combat bearable, like the ability to hotkey items and spells for faster use in real-time and the chance to equip more items for use in battle. A mini-map that’s constantly displayed onscreen (that just so happens to use the SNES version’s 16-bit maps) helps players keep track of where it is they need to go without having to fumble through menus. There’s also a local, couch co-op multiplayer component that remedies a lot of problems players will run into while commanding the game’s wonky AI companions. You won’t have to chip away at enemies, run away, and come back again, as your friends can cover you while you go off into a corner to heal. Considering the lack of frustration and genuine fun that can be had in coordinating how to take down the next wave of enemies, Secret of Mana is a much more enjoyable experience when played side-by-side with human counterparts. It’s unfortunate that the game’s multiplayer isn’t getting the attention it deserves, as that’s the real star of the show here.

Another one of Secret of Mana’s redeeming qualities comes in the form of its remastered soundtrack, which does an excellent job of remixing and adding techno elements to some of title’s classic themes. Everything in the musical department has been completely redone, with some tracks boasting lovely orchestral mixes that are arguably better than the original. Compare the game’s original start screen melody with that in the remake for yourself to hear what I’m talking about. If you decide that the newer renditions aren’t exactly up your alley and would like the remake to remain as faithful to the 1993 classic as it possibly can, there’s an option for you to switch soundtracks via the game’s options screen at any time, so no worries on that front.

Though Secret of Mana’s musical score and actually worthwhile multiplayer component succeed, the remake’s flaws are too noticeable to be overlooked. Poor graphics, cringey voice acting, faulty hit detection, difficulty spikes, and wonky AI companions all keep Square Enix from reigniting the magic that is this JRPG gem a second time around. It’s a shame, though it does give the company a point of reference from which to make much-needed changes to other classics it potentially plans to bring back from the dead. Chrono Cross or Parasite Eve remakes can redeem the company for what seems like a poorly constructed re-imagining of Secret of Mana.

For now, it seems as though this classic will remain stuck in the annals of history for a little while longer. If you’d like to experience what makes Secret of Mana so great, you’ll find little in this remake. Stick with the original – that’s where the real legacy lies.