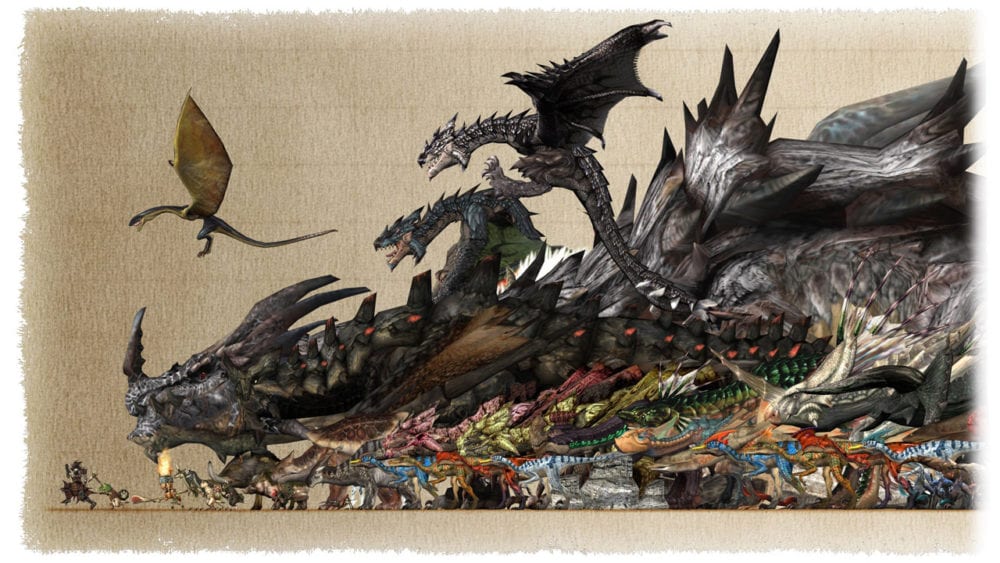 If you were to say 10 years ago that a series with such a simple name like ‘Monster Hunter’ would go on to become one of the most impactful franchises ever, I would think that you were lying through your teeth – I just would not believe you. That name is probably one of the most generic names of a video game ever. But Capcom could’ve called it Dragon Slayer and it still would be one of the most gratifying experiences ever. The complicated yet satisfying structure that the series is comprised of is something that other games don’t offer, sure, you can compare it to Dark Souls, but remember – Monster Hunter came before Dark Souls – people seem to forget that.

Looking at it from the outside, Monster Hunter is a grind-fest, simple as that. It uses a rinse and repeat model that really wouldn’t interest me in any other game. You hunt monsters to get rare materials so that you can craft advanced equipment in order to hunt even stronger monsters to get even rarer materials… you get the gist of it. However, Monster Hunter does a superb job at making the grind worth it. Hunting the same monster over and over again to yield rewards is always fresh and never feels stale. You can go at it alone, try it with strangers, or bring a new weapon type with you to try out. Simply put, there really is no end goal to Monster Hunter, and that’s why I think I love it so much. And finally with World, after all of these years, a lot of new people are experiencing that same feeling, and not just in Japan.

Besides adding new locales, monsters, weapons, and making online multiplayer the main facet of the franchise, the series really hasn’t changed all that much since its debut on the PlayStation 2. Capcom has created this gameplay flow that just works and is truly rewarding if you sit down and put the time required into it.

It can be hard to learn the ropes, which is why playing with friends who have experience is the best way to jump in. Go in with someone who has at least some knowledge on how everything works and you’ll find yourself having a grand ol’ time in no time flat, even if you don’t really understand what the heck is really going on.

This is the crux of Monster Hunter, the essence of it all. Having an understanding of the surface level is all you really need to grow and to succeed as a hunter. The flow of going into a hunt with your team, nabbing those monster parts, and upgrading your equipment is immensely satisfying. Knowing that you’re getting stronger and stronger with every hunt is a feeling that can’t be explained – doing it with friends feels even better. There’s a lot of information thrown at you in the beginning of the game, but just know that it’s perfectly okay to not completely understand what’s being shown or explained to you.

Monster Hunter: World adds in so many little things with this new entry that helps newcomers feel more welcome while also giving veterans something to cheer about. In past Monster Hunter titles for example, the maps would have a small loading screen between each numbered area; in World, each map lets you traverse the entirety of it seamlessly – no loading screens at all. There are also auto-crafting systems in play that help you create rare items without having to look up recipes and whatnot. Capcom has also made it easier to capture monsters, sharpen your sword, and a couple of other things that might not dramatically change the overall experience, but makes it a heck of a lot painless. Fans have taken notice of this effort by Capcom to smooth out the series edges and in return, Monster Hunter: World is getting the recognition it deserves.

In a time when we have so many games coming out, most of them being dozens of hours long, it can be challenging to recommend this series to someone who may not have the time or willpower to learn something new that’s completely out of their wheelhouse. But Monster Hunter deserves the time, and if given, will make you go back hunt after hunt. If you’re already a seasoned monster hunter, then good on you. But for those that have been scared to try it out, just do it. Dive in and see what it’s all about, and if you have someone that’s willing to help you out and be your shepherd – take the help! It’ll make your transition from newbie to veteran that much easier.