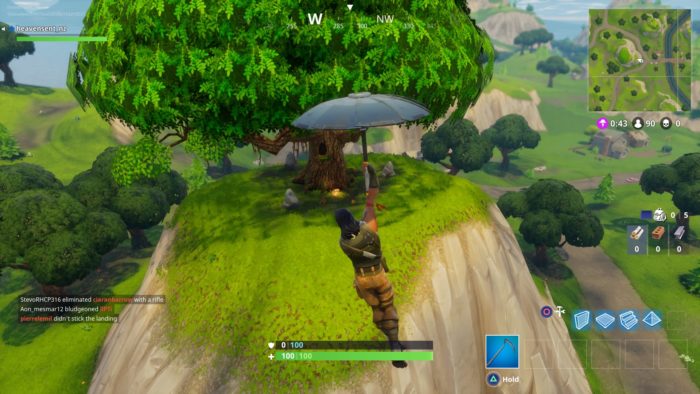 Fortnite: Battle Royale has serious momentum, and developer Epic Games is continuing to offer quality support to the rapidly growing multiplayer game. Epic Games has made both big and small changes over the past couple of months, but their latest announcement is sure to excite players. Today, Epic tweeted that a new mini-gun weapon is coming to Fortnite on February 1st, along with some smaller tweaks that fix up some of the smaller problems Fortnite players have recently been facing. All of the changes are coming through Patch V.2.4.0.

The mini-gun looks to be a game-changing weapon, and the video including in Epic’s tweet shows a cutscene of the mini-gun mowing down some built walls. Not much else is said or shown about the mini-gun, but in this post from Epic, the mini-gun is described as having “sheer firepower.” This new weapon addition will certainly change the battlefield, and seeing how the mini-gun affects Fortnite’s combat will be interesting to see. Some other changes are also included in the patch, including adjusted drop rates for the rare and legendary version of the surpassed pistol, a new “controller auto run” option, and a 3D resolution slider to players on PC and Mac. Thankfully, the patch also addresses some bugs, like a potential client crash sometimes onset by “an audio cue,” and another that removes footstep audio from dance emotes.