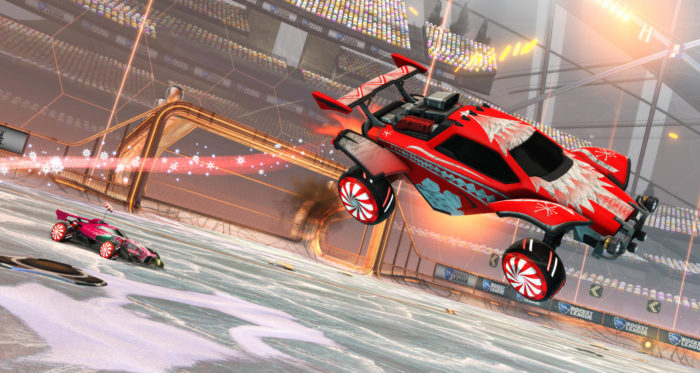 Winter themed events are coming in thick and fast across the gaming landscape, and this coming week Rocket League is set to join in on the holiday cheer.

The Frosty Fest event will have players collecting snowflakes with every completed online match, which can be redeemed to purchase event items, Decryptors and Frosty Fest event crates. It’s a very similar setup to Rocket League’s Halloween themed event from a few months back, though developers Psyonix have heard the calls from fans and are in the process of making adjustments where appropriate. Frosty Event crates also have a random chance of dropping after online matches or can be purchased directly.

Crates were first introduced to Rocket League last year and contain a range of items, including wheel types, goal explosions, decals and rocket boosts. Decryptors, meanwhile, are newer ways to unlock any crate in the game and can only be purchased with Snowflakes, otherwise the only other way to unlock crates is to purchase in-game keys.

As for the rest of the game, Psyonix notes that a few of its stadiums will get a winter makeover of sorts, noting Mannfield, DFH and Utopia. Unfortunately there’s nothing new game play wise, but there’s already a considerable amount of content and options including ice hockey that fit the bill.

The Frosty Fest event launches for PS4, Xbox One, PC and Switch from Dec. 11 and wraps up on Jan. 2.