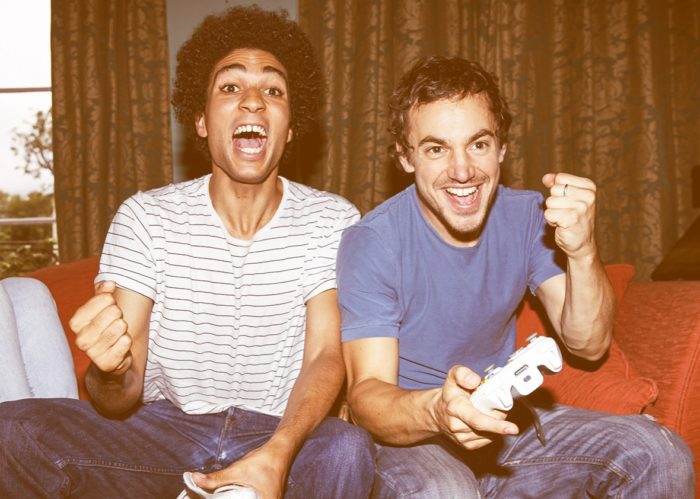 Let’s talk about trends in modern gaming for a moment.

We can gloss over matters such as DLC and microtransactions, because that’s all been said and done. We need not even harp on the apparent lack of suitable games for all ages – indeed, some would even suggest that the shift towards a mature audience is the proper evolution for the industry, growing with the generation that first fell in love with them decades ago.

Today our focus is on local multiplayer, once a staple taken for granted, and how it has devolved into more of a surprise inclusion than a sure thing. This idea would have been considered lunacy not long ago; the Nintendo 64 popularized the standard of four controller ports, and ushered gaming sessions into a new era. It was no longer a private affair, with friends left idly awaiting their turn. Now it was a party – and everyone was invited. The extra players meant that the mayhem took on a fantastically frantic turn; once you had disposed of one foe, another could be lurking around the corner. Temporary allegiances and double crosses, ganging up on one another to gain a competitive advantage, and sometimes, the most unlikely of players was able to squeak free from the carnage, claiming a victory that left their opponents in shock.

Then, online multiplayer arrived on consoles and the landscape shifted radically. The scope had grown radically beyond simply playing against your friends and little Billy down the street (who, let’s be honest, is straight up garbage at Mortal Kombat). You could now take on the world’s finest, complete with all of the trash talking and digital teabagging that came with it.

In a short span of time, online multiplayer would become not only an expectation, but in many instances, the only option. Back in 1999, Need for Speed: High Stakes laid down the ultimate challenge, putting player’s prized vehicles on the line in the most intense race they would ever experience. Fast forward 18 years and not only is offline multiplayer incomprehensible in Need for Speed Payback, they go so far as to tout the fact that offline single-player has returned from its temporary absence.

As is often the case, EA is particularly notorious for their obsession with connectivity – don’t expect to be taking to Battlefield 1’s war locally with a friend, either – but they aren’t the only culprits. Ubisoft games like Ghost Recon Wildlands, or Codemasters titles like DiRT Rally and the F1 series, also forego offline multiplayer entirely. Racing against friends sounds fun, doesn’t it? Better hope they have the cash to buy the game too, then.

So what happened exactly? Sure, online multiplayer is an exciting and lucrative market (remember that word, ‘lucrative’ – we’ll come back to that later), but local multiplayer has been pushed to near-extinction, and that truly doesn’t feel quite right. One consideration could be the logistics: today’s games are so graphic-intensive that they would have to be scaled back immensely to be able to handle the demands of multiple screens operating simultaneously. We all remember GoldenEye fondly, but we’re less inclined to feel nostalgic about the sluggish frame rate during each explosion. Perhaps the expectations of the modern gamer are so high that it would seem like an insult to offer a watered-down local multiplayer option.

Otherwise, it could be a reflection of the change in how we socialize with one another in real life. People communicate through social media and texting more than they do directly, in all but their most intimate relationships. Online multiplayer offers accessibility with the same friends you once played against locally, albeit from the comfort of your own homes. No pants required!

Circling back a little, though, the most obvious answer, shady as it may be, is that offline multiplayer simply isn’t lucrative enough. Precious time and resources invested in a game for a mode that doesn’t cost anything extra to consumers? It’s counterproductive to the modern model of gaming business, and that’s a sad, simple truth. Offline multiplayer is organic, it’s healthy, and it’s pure – but that’s not going to show up on the bottom line for publishers and developers.

As per usual, Nintendo largely stays their course and goes against the norm in this regard. Mario Kart 8 Deluxe offers the same four-player local antics we fell in love with so long ago, and can even connect with another Switch for up to eight players. In this sense, the Switch has potential to be the last bastion for the offline gamer. The console’s portable nature makes it easy to move from place to place and as such, it is very much a social device. This has been clear from the advertising that has surrounded it: it’s fun for families and for people on the go. Take it to a buddy’s place, crack off a Joy-Con, and voila! It’s just like the old days.

Those less inclined to opt for Nintendo’s little bundle of joy aren’t entirely out of luck, however – indie developers also still rely heavily on offline multiplayer, and in some cases, it’s their calling card. Overcooked is the very embodiment of couch co-op, and the room feels alive with the familiar shouting, laughter, and colorful language of yesteryear. Rocket League came out of nowhere to become a surprisingly hilarious example of chaotic fun, while Towerfall Ascension’s sprite artwork and hordes of enemies allow for retro combat. The list of couch co-op gems tucked away on the PS4 and Xbox One is surprisingly extensive, and rather gratifying, to boot. Indeed, some of the aforementioned triple-A studios do throw the offline crowd a bone on occasion, EA Sports titles still include offline multiplayer, while Ubisoft’s Rayman Legends thrives when four people join forces.

The most accurate way of surmising the situation, perhaps, is to declare that local multiplayer has taken a firm backseat, and those yearning not to be forced to face off against n00bslayah2002 must simply settle for a smaller library of titles to choose from. Regardless, the desire for the option to at least be present in more games – even a stripped down version – surely would be better than nothing at all. To omit it entirely reeks of ‘too hard, won’t bother,’ and does a disservice to casual gamers in particular, who don’t want to commit to the fiscal commitment of online gameplay. Games are meant to be enjoyable for everyone, after all.

But we will persevere, us plucky local multiplayer enthusiasts. Keep your eyes on those lovely indies as always, and tip your hat to Nintendo (as they literally did to you, by even giving Cappy minor playability in Super Mario Odyssey). Hold onto those spare controllers, and maybe even give little Billy down the street a call. There’s fun yet to be had.