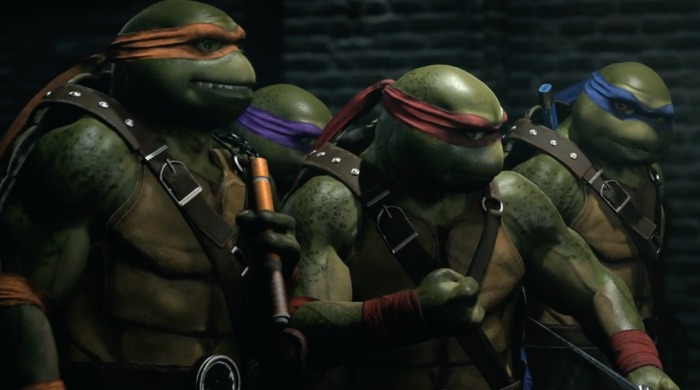 The next characters coming to Injustice 2 via the Fighter Pack 3 DLC have finally been revealed and it’s safe to say that nobody saw this one coming. While Injustice 2 players already had a heads up that Atom was on the way and had strong reason to believe Enchantress would join the game, the third character included in the reveal came as a major surprise. Turns out the Teenage Mutant Ninja Turtles are joining Injustice 2’s cast of DC comic heroes.

The cinematic trailer for Fighter Pack 3 was revealed during the Injustice 2 ELEAGUE World Championship on TBS just before finalists Dragon and FoxyGrampa took the stage. There had been some serious guessing games going on as NetherRealm fans tossed ideas around about who could be coming to Injustice 2. Data miners insisted that Shadow of Mordor’s Celebrimbor would be joining the Injustice 2 cast but it looks like the file names that were uncovered were code names to help keep the real identity of the new fighters under wraps. There is no telling how everyone’s favorite lethal group of turtles will match up against the likes of Batman, Superman, and the other heroes in the game but their addition certainly sparked quite the reaction from the fighting game community.

i AM SO WHAT THE FUCK RIGHT NOW ON THIS REVEAL

The next time you think you're hype about something, watch this and realise what real hype looks like. @Tasty_Steve@Sajampic.twitter.com/AChST6mz2N

Live reaction from inside the studio for the Fighter Pack 3 reveal featuring Atom, Enchantress, and the Teenage Mutant Ninja Turtles! #Injustice2@InjusticeGamepic.twitter.com/LEh9DqPfCy

Only time will tell if the Teenage Mutant Ninja Turtles will make a viable pick in this game and actually present a challenge for top tier characters in the game or if their addition was just pure fan service for all the gamers who grew up with this iconic group of sewer dwellers.