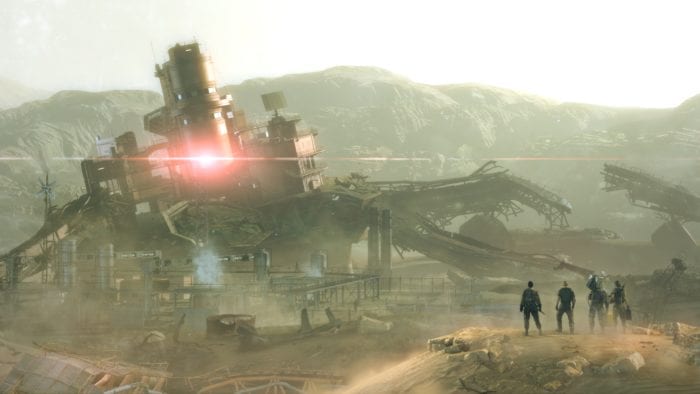 With its official reveal last August, Metal Gear Survive caused quite the uproar among passionate fans of the series. With the announcement having come so soon after Kojima’s departure from the company, many were understandably upset with the mere existence of the game, accusing it of being a cash-grab on Konami’s part.

But that’s only one reason for the outrage. The other, perhaps more damning reason, is that Metal Gear Survive appears to have absolutely no interest at all in respecting the series’ convoluted legacy and story canon. Putting zombies into a Metal Gear game honestly doesn’t seem that far-fetched to me; the series has dealt with nanomachine vampires, psychic mutants, and the Skull Unit from the recent Phantom Pain were pretty zombie-like in their behavior as well. No, the real problem here is that even though Konami has already established that the events of Metal Gear Survive take place directly after the destruction of the MSF Mother Base and the remaining soldiers are sucked into an alternate dimension through a wormhole (again, not that far-fetched), for some reason these MSF soldiers are seen wearing Diamond Dogs gear and walking towards what looks like the Diamond Dogs Mother Base. And on a map that looks suspiciously like MGSV’s Afghanistan desert, no less.

If you’re not that familiar with the Metal Gear Solid lore and why these things actually matter for continuity, let me break it down for you. Before Big Boss went into his nine-year coma, he was the leader of the Militaires Sans Frontieres, or the MSF for short. After he wakes up, he’s reunited with Ocelot and Kaz, and they build a brand new Mother Base near the Seychelles. This is also when they start a new mercenary group called the Diamond Dogs.

So, if Metal Gear Survive follows the story of the MSF soldiers left behind on the Mother Base that got destroyed, they can’t possibly know of the Diamond Dogs because they’re still nine years away from being created. Not to mention the fact that they were essentially left behind by Big Boss. However, if you take a look at the game’s announcement trailer, you’ll see that immediately after getting sucked into the wormhole and going to the alternate dimension, the soldiers are suddenly dressed in the brown Diamond Dogs khakis instead of the MSF black or dark green-colored uniforms. Even the old MSF vest is nowhere to be seen.

The MSF survivors wearing the Diamond Dogs uniforms don’t fit in the story Konami is trying to tell because there’s no way they would know who the Diamond Dogs are or get a hold of their clothing. The inconsistencies don’t stop there, either. Towards the end of the trailer, the survivors are also seen walking towards a destroyed Mother Base in the not-Afghanistan desert. The original MSF Mother Base was ripped apart by the wormhole, and in a story about these wandering soldiers trying to find their way back home, it would make sense for them to find that very same destroyed Mother Base. But that’s not the case here. A few discerning eyes over on the series’ subreddit have observed that the wrecked Mother Base we see in the trailer is the Diamond Dogs version near Seychelles. Which also doesn’t make any sense.

Inconsistencies like these hurt because they feel like extra salt being rubbed into the wounds of upset fans. Not only is Konami attempting to continue the series without its creator on the development team, it would appear that they can’t even be bothered to check that the assets they’re using in Metal Gear Survive are canonically accurate for the MSF survivors. All of this adds further to the assumption that the game is just making use of the Metal Gear brand to sell a few more copies.

The situation looks bad, but it’s also worth mentioning that the game does feature a single-player campaign that follows the story of these survivors. With the survivors being sucked into an alternate dimension, there’s always the possibility that they’re now in a world where Big Boss failed to bring the Diamond Dogs together and this led to its destruction before he could turn into the villain we all know and love in the Solid Snake saga. It’s entirely possible that we’re seeing all these assets – the Diamond Dogs uniforms, Afghanistan, the Seychelles Mother Base – because the MSF survivors are living in a world where Big Boss fails. Konami could very well have constructed an interesting spin-off story that explores a version of the Metal Gear universe where Big Boss dies prematurely.

Is that likely? Well, no. In all honesty, it’s more probable that the campaign is just going to be a case of ‘oh these soldiers are here and they’re fighting zombies now.’ It would be a very pleasant surprise if Metal Gear Survive’s campaign did end up being a well thought-out side story, but if we’re being realistic here, that doesn’t seem at all likely to happen. But one can hope.

It’s even more of a shame, especially when you consider the fact that this is actually shaping up to be a fun game to play. I have no shame in admitting that I thoroughly enjoyed my time with the game when I tried it out at E3 earlier this year. Whether you want to admit it or not, Metal Gear Survive looks damn good with the FOX engine, and it basically has the same combat system and mechanics from The Phantom Pain, which means it’s most definitely going to be a blast to play with friends.

At the same time, that knowledge only seems to hurt the fans even more. Konami has all these great tools at their disposal. One need only look at their ridiculously elaborate Metal Gear pachinko game cutscenes to know that they’re very much capable of remaking the classic titles and restoring them to their former glory. And yet, instead of getting the Snake Eater remake that fans have been wanting for years, we’re getting Metal Gear Survive, a game that is in all likelihood going to be regarded as a travesty with no regard for the series’ legacy.

I’ve still got my fingers crossed that maybe someday, Konami will decide to remake the older titles – it just seems like such a waste not to – but for now, we’ll just have to make do with the off-brand Diamond Dogs and their zombie nemeses.