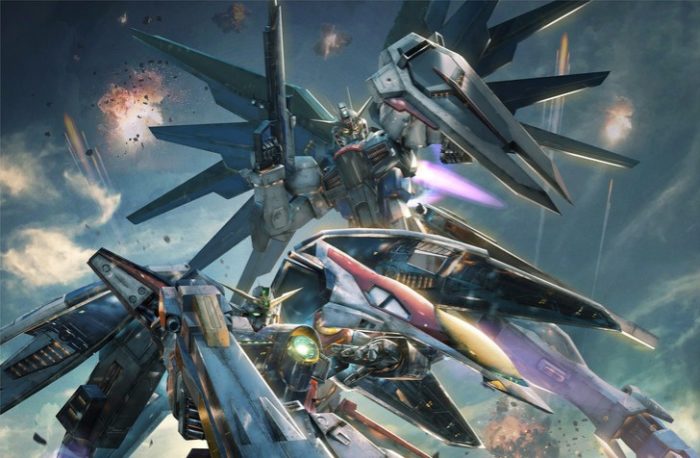 Gundam Versus on PS4

Gundam is one of the longest running anime series in existence, dating all the way back to 1979. This storied history is abundantly clear in Gundam Versus, a game that throws a metric ton of playable mobile suits at fans of the series. It’s a robust, fast-paced fighter that can be a ton of fun when you sink into it, but can be a bit daunting to really launch yourself into.

There are few Gundam games I’ve played that capture the feeling of battles from the anime as well as Gundam Versus. Mobile suits are fast, and matches play out at a blinding speed. You’re not going to be able to just jump in and rule the battlefield though, as Versus has a pretty complex control scheme that really takes some getting used to. You pilot your mobile suit around with the left stick, boost around by tapping X twice, and have various attacks mapped to most of the other buttons. Melee is mapped to triangle, a super attack to R2, assists to R1, and various others to L1 and L2. The big catch here is that each and every mobile suit in the game comes equipped with different moves, and functions integrally different in battle.

Jumping into the game initially I was utterly confused on the ins and outs of combat, and had to methodically work myself through everything. There are three different tutorials to teach you everything thankfully, but it just takes a while to get the hang of everything. How to dash around the battlefield correctly, the range of melee attacks for each mobile suit, and how all the abilities work together. This means that you’re definitely going to need some practice before you can fully enjoy the combat system. Both in general, and with specific mobile suits.

The upside of this is that once you get the hang of things, Versus’ combat is an absolute blast. Matches are incredibly fast-paced with each mobile suit blasting around the battlefield, using flashy and destructive moves. At all times you’re locked onto an enemy, meaning you’re constantly in the action. A lot of time is spent in the air, avoiding attacks, and waiting for an opening. This results in an experience that greatly replicates the insane battles of the anime, making you feel like an ace pilot when you shoot down an opposing mobiles suit or Gundam.

Despite the overwhelming number of suits, combat feels relatively balanced. Versus doesn’t play like your traditional fighting game, but it is fairly skill based. Knowing how to perfectly dodge attacks, pull off combos, and find openings is important. There are differences in suits’ power, of course, but this comes with a trade-off.

One of the central points of combat comes down to how much each mobile suit costs. Your team has a certain number of MS points, and each time a player dies points are subtracted until one team runs out. Different mobile suits have different costs, and the higher the cost the more abilities and better performance the suit has, whereas lower cost means less points reduced but fewer abilities.

This creates an interesting dynamic where you need to decide which you value more, a powerful mobile suit or a lower cost. This is a double-edged sword, however, simply because of the sheer number of mobile suits in Gundam Versus. There are over 90 suits from across the series’ history, and considering that each one is different, this is staggeringly intimidating. Even more get added on when you factor in the assists, which you can unlock as you earn GP.

As a Gundam fan I was overjoyed at seeing so many of my favorite suits, but I also had a hard time choosing which one to use. Considering you really have to double down and learn a suit if you want to use it, your scope feels narrowed as you don’t want to take on too many. The wealth of options can be overwhelming in this case – good for fans but definitely confusing and intimidating for anyone not familiar with Gundam. While the roster is impressive and features almost every Gundam series, there is a small quibble I have with it.

G-Gundam’s absence is very noticeable, which is surprising considering many of the suits in that series would be perfect for a fighting game like this. It just feels odd to see so many iconic suits featured, but not see the Burning Gundam or Master Gundam. Again, it’s a small issue in the face of everything, but it’s there nonetheless.

While the main mode of versus is the 2v2 battles, things really heat up when you go to 3v3 battles. While the four-player matches are manageable, putting six players in a match is chaos. This is fun chaos, but these matches often feel like they rely less on skill. Player-vs-player matches are the main draw of Gundam Versus and you can play 1v1, 2v2, and 3v3 online in both a causal and ranked mode, as well as with friends. There’s also the typical multiplayer options like equippable emblems and titles. Unfortunately, I consistently had trouble connecting to 3v3 battles, whereas 1v1 and 2v2 worked smooth most of the time. I did connect to 3v3 battles, but oftentimes I was stuck searching for matches for up to seven or eight minutes, or experienced severe lag during matches. While it didn’t stop me from playing the mode completely, I hope it’s something Bandai Namco can iron out in the coming days.

In addition to these modes, there’s also a host of single player offerings. You can play random matches with the CPU a la Smash Bros., or take part in Trial and Survival modes. The former sees you playing through a sequence of levels where you take on multiple groups of enemies, as well as giant boss mobile suits. There are 10 routes in total to play through, and oftentimes these routes have branching paths. Of course, there’s no story related content here, but it does help to mix up gameplay a little bit.

Survival on the other hand is just as it sounds, pitting you against waves of enemies, with more waves for higher difficulties. All the modes do have slight variations, but by and large the game entirely leans on the combat system, so it benefits from being as robust as it is. At the same time, if you get tired of that core combat, there’s not a lot there to differentiate Gundam Versus for you.

The presentation of the game also nails home that Gundam vibe. Battlefields are famous locations from different series, and mobile suit models all look sleek and shiny as they should. The game really benefits from its soundtrack which features actual tracks from different series, from the campy “Fly! Gundam” of the original series to the techno inspired “Rhythm Emotion” of Gundam Wing. You can entirely customize the soundtrack for each mobile suit, selecting which song you want to run as you play as each.

Gundam Versus has a lot to offer, and fans of the series will no doubt be pleased with the frenetic combat and roster. It may not be as accessible to those that don’t know anything about Gundam, but there’s still a fast and engaging battle system to take part in with a strong multiplayer offering. While the staggering roster of mobile suits is intimidating, it’s impressive how much variation there is, and just trying each one out and mastering it is going to take you quite a while.

Comments
Continue Reading
Related Topics:Anime, bandai namco, Gundam Versus, Is it Good, Is it Worth it?, Review