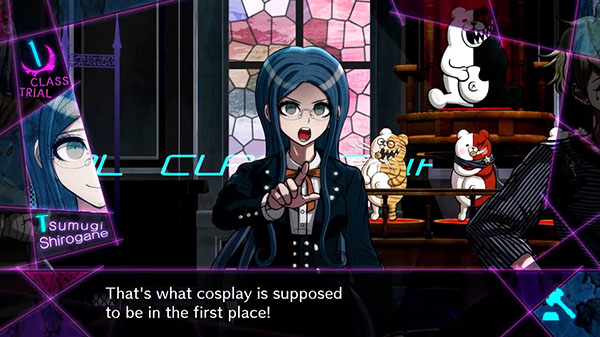 The Danganronpa V3: Killing Harmony “Ultimate Roll Call” videos have been releasing one after another leading up to the game’s eventual release, and the “Ultimate” students just keep getting wackier and wackier. This time around, the video introduces characters K1-B0, Gonta Gokuhara, Shuichi Saihara, Tsumugi Shirogane, and Monosuke.

There’s a robot for starters, by the name of K1-B0, or “Keebo,” who’s allowed to attend high school and has problems with prejudice towards robots. He’ll make sure he calls anyone out who may show any kind of hatred against robots, or robophobia. Go on, K1-B0, we need woke robots in the world. He’s the Ultimate Robot of the bunch.

Gonta Gokuhara is the Ultimate Entomologist, if you can believe there’s such a thing. After getting lost in the forest for ten years, not only was he raised by wolves but he learned how to speak to animals and insects and has never killed any human creature.

Shuichi Saihara is the Ultimate Detective, who loves helping to solve cases, and he’s actually solved a murder ahead of the police before. Tsumugi Shirogane is the Ultimate Cosplayer, who’s basically an excellent cosplayer who creates and wears her own costumes, able to talk your ear off a mile a minute, talking about video games, anime, and manga like a woman possessed.

Lastly, Monosuke is a Monokuma Kub who’s opinionated and rational, and a gentleman until it comes to having the group fight against each other.

You can see all the new characters in the trailer before ahead of Danganronpa V3: Killing Harmony’s debut on PlayStation 4 and PS Vita on September 26.