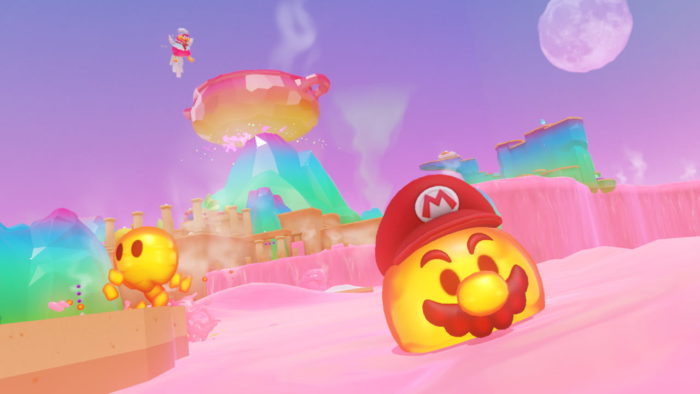 Super Mario Odyssey is fast approaching, and since it’s announcement there has been much speculation about how many playable Kingdoms there will be in the game. Currently the total has been brought up to seven, which people have pieced together through various promotional materials and Nintendo Announcements. These Kingdoms are (with the names of some not 100% confirmed):

Now, thanks to the release of the box art for the new wedding-themed Odyssey Amiibos, keen-eyed fans (like Apermax on YouTube) have uncovered three new Kingdoms; Mushroom, Snow, and Lake. Snow and Lake kingdoms have practically been confirmed from this art, but Mushroom Kingdom is just speculated, since only the end of the word is visible.

3 kingdoms to be Mushroom, Snow & Lake what an exciting day of info #SuperMarioOdyssey#MarioOdysseypic.twitter.com/Pl1gc0lx3R

Ever since the game’s reveal, the number of Kingdoms has just kept growing. The initial number was four, because of the signs in New Donk City, then Six thanks to the E3 Trailer, and then Nintendo revealed a Seventh on Twitter. These discoveries have brought the total up to 10, and from the map people think more Kingdoms could yet be revealed before launch.

The Amiibos themselves show of Peach, Mario, and Bowser in stylish ways that we’ve never seen them before, meaning they’ll probably sell like hotcakes. As of right now, it’s not sure what functionality they’ll have in-game, but that doesn’t even matter for many of the most dedicated collectors.

Super Mario Odyssey is shaping up to be one of the year’s biggest releases, and we’re incredibly excited to give it a try. It’s set to release as a Nintendo Switch exclusive on October 27, giving Nintendo plenty of time to reveal more.