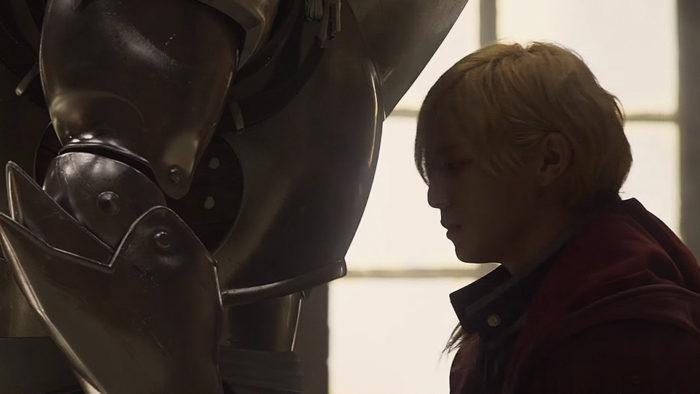 Warner Bros. Japan’s official twitter page has released a handful of new images from the upcoming Fullmetal Alchemist film that is set to debut in Japan on Dec. 1 of this year. The set photos show off a few scenes of the film that have not yet been included in trailers, or at least not in America that is.

Roy Mustang, who is played by Dean Fujioka, is the focus of the first image and is seen examining his signature ignition cloth glove. In the second, Winry Rockbell and Alphonse Elric are riding along on a train heading to some unknown location. The third image is of members of the Amestrian Military, with Riza Hawkeye positioned in the middle of the conflict. And the fourth is of one of the main antagonists, Envy, staring down some poor soul.

Among the pictures were also posters that feature Winry, the Elric brother’s childhood friend and mechanic. Another of the posters shows off Roy Mustang, Riza Hawkeye, and Maes Hughes, all dressed in their uniforms. The third poster depicts three of the seven deadly sins, Envy, Lust, and Gluttony.

These images come just a little less than 3 months away from the December release of the Fullmetal Alchemist live-action adaption that is being directed by Fumihiko Sori and led, in terms of acting, by Ryôsuke Yamada who is playing the lead character, Edward Elric. But, that December release so far is only for Japan and it isn’t yet known when America can expect the film to release in the West.