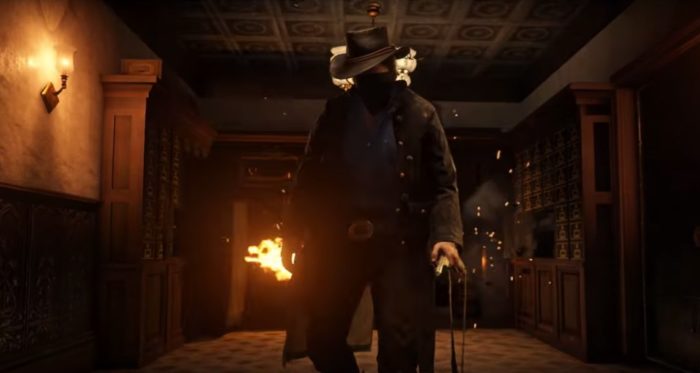 Red Dead Redemption 2 is easily one of the most anticipated games of 2018, and Rockstar Games treated fans to a brand new trailer today. Although the trailer is short, clocking in at only a minute and a half, there’s a few things we can glean from the upcoming open world game. We’ll help break down what you see in the new Red Dead Redemption 2 trailer, and everything we learned from it.

The trailer starts out with a few dazzlingly beautiful shots of the wilderness, as it introduces us to the new antihero Arthur Morgan. We see Morgan asking a camper if he has money for him, followed by a voice saying “You’re a wanted man, Mr. Morgan.” Obviously this suggests Morgan is a criminal, and we soon find in the trailer as well as its description that he’s a part of the infamous Van Der Linde gang. This is, of course, the gang that John Marston was a part of before the first Red Dead Redemption, and was widely known throughout the land for their acts. We don’t know at this point, but it’s possible we could see appearances from John himself, or Bill Williamson.

This confirms now that Red Dead Redemption 2 is, in fact, a prequel taking place before the events of the first game when the Van der Linde gang, led by Dutch, is still together. Next we see a shot of a woman mourning at a grave, with Morgan talking to a young man and saying “Maybe when your mother is done mourning, I’ll keep her in black, on your behalf.”

This suggests a lot about Morgan’s character, and could hint at some kind of family dynamic going on. It’s hard to say at the moment, but it certainly seems like Morgan isn’t the nicest fellow at this point, talking to a son like that right after the death of his father. Combine this with the intense acts of violence, robberies, and explosions he perpetrates throughout the rest of the trailer, and it looks like we’ve got the perfect antihero.

Next, we move onto shots of what appear to be bandits hiding in the trees (probably Dutch’s gang) who then ambush a train. We see the group take over the train, followed by a few other shots of horses riding. Morgan says “We’ve got law men in three different states after us. They chased us from the west, they chased us over the mountains.”

This suggests a few different things. First off, robberies will probably play a big part in the game, as we first see the gang stop the train, and later in the trailer we see them blowing up what appears to be a bank. This could hint that we may see the event where Dutch’s gang botches a robbery, where they leave John Marston for dead and flee.

This is something we only heard about in the first game, but could very likely see. The scenes also suggest that Red Dead Redemption 2 could take place across multiple states, as Morgan states they’ve been chased across three, and we see some very different scenery in the trailer, from snowy forests to swamp land. At the same time, considering how heists were such a central part of Grand Theft Auto V, it’s not crazy to think Rockstar could be using what they learned from that to implement a focus on robberies in the Wild West, which of course were a big thing at the time.

Right after that we get a look at a returning mechanic and a new weapons. Morgan is using a bow to hunt a deer in the forest, a weapon that never featured in the first game, but could be incredibly useful with how silent it is. It also means that hunting returns in the game at least in some way, which was a big feature in the first Red Dead Redemption.

Next we see a shot of a woman, who just before that stabbed someone in the hand in a saloon. We don’t know who she is yet, but it’s likely that she’s one of the members of Dutch’s gang as we hear her say “You’re the only one of these fools that I trust.

After that is another returning feature, horse breaking, which was used to tame horses in the first game so you could ride them.

Near the end here’s something the trailer could confirm, we’ll be able to dual wield. We see a shot of Morgan firing two pistols at once, and although it could be just a cutscene, it seems unlikely that this wouldn’t be a feature with a character that uses two guns.

The very last shot of the trailer is an important one, and a familiar face to fans of Red Dead Redemption. We see just a brief second of Dutch himself, the infamous leader of the gang. He asks “Do you have my back?” To which Morgan responds, “Always, Dutch.”

Finally, of course, we get a release window for Red Dead Redemption 2, which we be launching sometime in Spring 2018 on Xbox One and PlayStation 4. That’s what we gleaned from the new trailer, did you happen to spot any other little details?

What do you think of the latest look at Red Dead Redemption 2? Let us know down in the comments below.