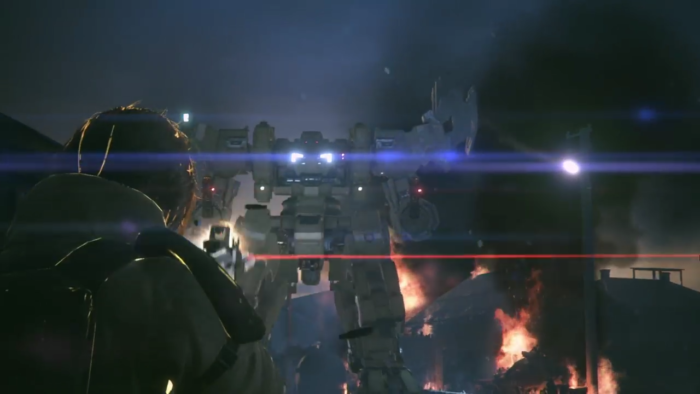 Square Enix released a trailer for Left Alive at TGS. This survival action shooter might be set in the Front Mission universe, but from the looks of the footage we’ve seen it’s looking like it might be more like Metal Gear in tone and gameplay.

“God and the devil are fighting there, and the battlefield is man,” is the quote that opens the Left Alive trailer, and Dostoyevsky’s words are more than a little reminiscent of the Metal Gear series. We don’t have any idea of what the story will entail, but we know that there is some sort of war going on.

The trailer features the Wanzer – a portmanteau of the German “wanderpanzer,” (“wander” meaning “walking,” and “panzer,” meaning armor) – mecha that are a hallmark of the Front Mission series. However, the brief burst of gameplay we see at the end of the footage shows the player on foot. In stealth and shooting sections very reminiscent of Metal Gear.

With the future of the Metal Gear series in the air, it’s good to see that another developer might pick up that unique gameplay. The Front Mission universe hasn’t been visited in a while, and I think the near-future tech portrayed in the franchise will translate well to a third-person stealth shooter. Hopefully, though, we’ll get a chance to spend some time in the cockpit of a Wanzer in Left Alive. It’d be terrible if Square Enix didn’t let us in on all that hot bipedal robot action.