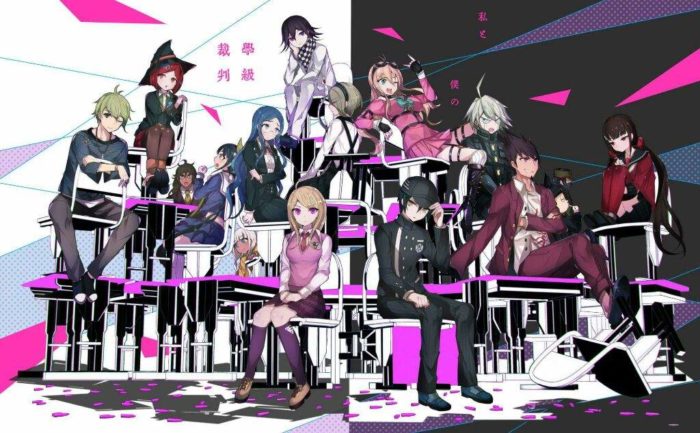 Excluding the spin-off Ultra Despair Girls, fans have been waiting five years in the west for the next chapter of the Danganronpa series. Despite moving away from the Hope’s Peak Academy storyline (which is concluded in the anime), Killing Harmony offers all of the typical style, charm, and extravagant murders that you’ve come to know and love from the series. Unfortunately, the slight niggles and issues that were present in the previous two mainline titles also rear their heads in Killing Harmony, too.

For those new to the series, let me give you a quick rundown. 16 students are kept against their will in an unknown location and are forced to participate in a killing game. A crude, hilarious, and very self-aware bear named Monokuma oversees all of the killing and then tasks the students with investigating the crime scene and piecing together evidence in order to work out who the killer was. If you get it correct, the killer is killed and everything is right with your group. That is, until someone decides to murder one of their fellow students and the whole thing starts over again. Killing Harmony doesn’t change a whole lot from this formula. In fact, aside from the inclusion of the Monokubs – Monokuma’s charismatic kids that help him oversee the killing game this time around – the story will feel very familiar to long-term fans.

That’s not to say that Danganronpa V3: Killing Harmony doesn’t have twists and turns. In fact, its later chapters really up the ante and are, without a doubt, its finest moments. The final Class Trial is arguably the funniest and most ‘out there’ the series has ever gone, and aside from the second case which follows an incredible opener, each one manages to outdo the next.

Killing Harmony’s story will catch you out with plenty of surprises that you just don’t expect. It’s messing with you, toying with the preconceived expectations you have for the way things play out in a Danganronpa game before sending you in a completely different direction. Get through the inexplicably long and drawn out prologue (seriously, it could have been half the length) and you’ll be rewarded with some great moments that’ll catch you completely off guard. 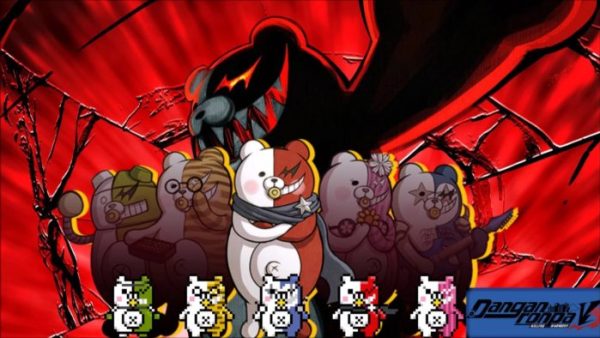 Alas, in trying to mix things up in Killing Harmony, the inclusion of the Monokubs shifts Monokuma into the background somewhat, and that’s disappointing. His crude, fourth-wall breaking quips and witty one-liners were what, to me, made the first two games so unique and entertaining. His offspring may be just as crude and over-the-top, but they don’t always get it right. More often than not, they spout off nonsense that just pads the game out and their jokes only hit half of the time, lacking the poignancy of their father. Other times, they excellently complemented Monokuma and were involved in hilarious shenanigans that only a group of small robotic bears in a Danganronpa game could get up to. All in all, they feel unnecessary, especially considering how beloved Monokuma is to fans. Fear not, though, Monokuma isn’t out of the picture for good, but he doesn’t pop up half as much as he has done in the previous outings.

Alongside the Monokubs is the new cast of Ultimate students who will be participating in the killing game with you. The group of 16 (your character included) is, once again, a little hit-and-miss. While some of the students are charismatic and really embrace their “Ultimate talent,” others feel more generic and their talents an afterthought shoehorned in because they needed some sort of talent. Likewise, you’ll find characters that fit the typical series roles. Miu is the large-chested female who seems to constantly be the topic of hyper-sexualized conversation or the source of it, while Maki has some serious Kyoko (Trigger Happy Havoc) vibes.

As such, I definitely found myself warming to some characters in Danganronpa V3: Killing Harmony more than others. Angie’s strange head bob she did whenever talking suited her “away with the fairies” personality and always got a smile out of me, while Kokichi is all kinds of interesting (we won’t say any more for the sake of spoilers). But then you have the likes of Kirumi and Tenko who feel like padding to get the number of students up to the standard 16. Of course, with 16 characters and the way the game plays, you’re always going to find yourself hanging around with certain characters more than others in the ‘Free Time’ sections (yes, they return), but this time around it was far easier to pick out my favorites than in the past.

Killing Harmony doesn’t change a ton when it comes to gameplay, opting to keep in the ‘Free Time’ segments which still feel like unnecessary filler. I never really wanted to go searching for a particular student, and while uncovering more information on each of the students certainly helps to flesh characters out, it feels like too much of a chore. Sure, the fragments you get from developing your relationship can be spent on skills to make things easier in the Class Trials, but even these aren’t incentive enough for the tedious gift matching. Considering how Team Danganronpa has taken the time to give the Class Trial segments a fresh lick of paint with new mini-games or updated versions of existing ones, the fact that Free Time remains the complete same is disappointing.

Class Trials are without a doubt the most satisfying and engaging part of the Danganronpa series. The thumping electronic music pushes you forward in order to seek out the truth, and it’s where we really get to see these characters at their most vulnerable. It also provides a change of pace from the slower reading and environment investigating sections that the rest of the experience offers up. In order to work out ‘whodunnit’ this time around, there are some new mini-games thrown into the mix. Mass Panic Debates have three different people talking at once, forcing you to hone in on the important testimony, and quieten down others shouting over them with your Silencer ability. Debate Scrums split the students into two teams and tasks you with matching up their arguments with a rebuttal, while Psyche Taxi is a rehash of Logic Dive from the second game, seeing you collecting boxes to uncover a question as you speed down a road, before choosing the correct answer to the question by hitting the corresponding woman. There’s also Mind Mine which sees uncovering the answer to a question by erasing colored blocks covering the answer. The pieces are erased when two or more of the same color connect, but adjacent pieces then change color in a determined order. 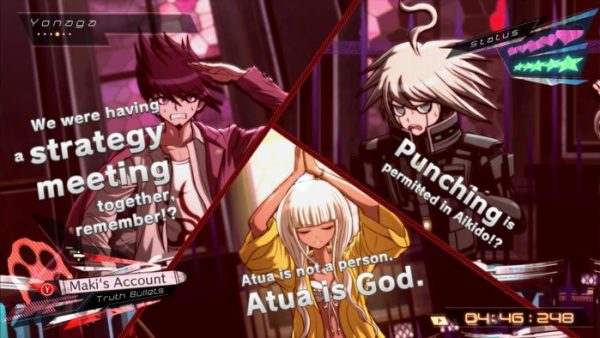 Debate Scrums and Mass Panic Debates are the strongest additions here, as they actually make sense in a Trial situation and feel distinctly different from anything we’ve experienced before. Alas, Hangman’s Gambit has been overhauled in Killing Harmony and still feels like one of the weakest and unnecessary mini-games you’ll play through. One of the most interesting additions to Class Trials, however, comes in the ability to Lie. You’re not able to do this whenever you please as you could easily derail a trial, but having the ability to mislead and redirect your fellow students’ way of thinking certainly instills a sense of power in you.

Unfortunately, for all of the improvements Team Danganronpa has thrown into Killing Harmony’s Class Trials, they’re by no means perfect. Playing on PS4, especially so, with the analog sticks not offering up a responsive enough control input for your aiming reticle during the trickier Non-Stop Debates. It can also get frustratingly unclear what Truth Bullet the game wants you to use to refute someone’s claim. Once you’ve finally got the right answer, the reasoning behind it wasn’t always something that could be deduced from the Truth Bullet’s description. This only happened on a couple of occasions for myself, but it detracts from the fantastic momentum that these trials manage to build.

Outside of the main attraction, Killing Harmony does offer up a couple of extra game modes. The Talent Development Plan allows you to guide any of the students from the series around a game board, leveling them up in the process. Once leveled up enough, they can then be used to tackle Despair Dungeon: Monokuma’s Test, an RPG mode which sees players trawling through 50 levels of a dungeon in order to defeat Monokuma. These are, like the previous games’ bonuses, very simple and low-thrill, but for die-hard fans who can’t get enough it’ll be enough to keep you playing once the credits have rolled.

Despite its shortcomings, Danganronpa V3: Killing Harmony is an excellent installment in the series. Though you have to finish it in order to truly appreciate its genius, the journey along the way is one hell of a ride. Killing Harmony takes everything you know about the series and makes it bigger, better, and even more baffling. Sure, things can get a little convoluted, crude, and “out there” at times, but that’s what Danganronpa has always been about.

V3’s best improvements aren’t in its mini-games, the way it handles, or in high-fidelity visuals, but in the way it embraces the series’ DNA and brings it to the forefront of the experience. Though there are some missteps along the way such as the almost cringeworthy hyper-sexualized dialogue revolving around Miu, or the filler ‘Free Time’ segments, Killing Harmony has me desperate to see where the series goes next.