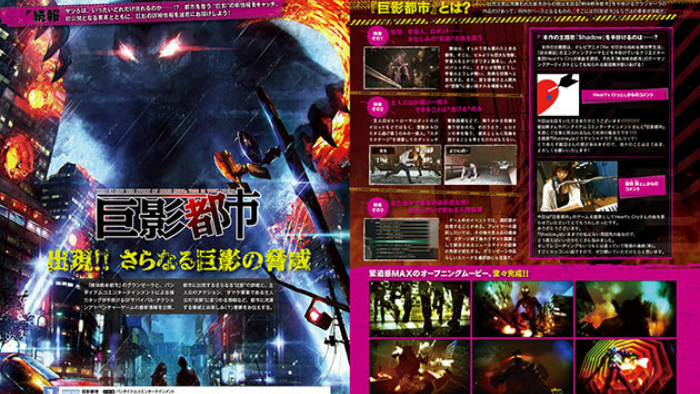 In this weeks issue of Famitsu, more info on the baddies coming to city disaster adventure City Shrouded in Shadow was released. The title is from Granzella, the studio formed by Disaster Report creator Kazuma Kujo after he left Irem. This title very much looks to be following in his previous titles’ footsteps.

Previously, we saw footage containing Ultraman in a sneak peek at the game. Details on exactly what large creatures and machines would be seen in the game have been scarce, but we now know a few more. Dada from Ultraman, Mechagodzilla, Griffon, and Abraham from Patlabor and Evangelion Units 00 and 02 will appear in City Shrouded in Shadow.

This game is definitely one I have an eye on. It’s unusual that a title puts you in the shoes of a regular everyday person and forces you to deal with the destruction and chaos that heroes and villains usually cause. However, there’s no word yet whether there will be a North American release or not yet, and there’s a chance that licensing all the iconic characters making a cameo in the States might be more than Bandai Namco wants to deal with.

City Shrouded in Shadow comes to PlayStation 4 in Japan on October 19.