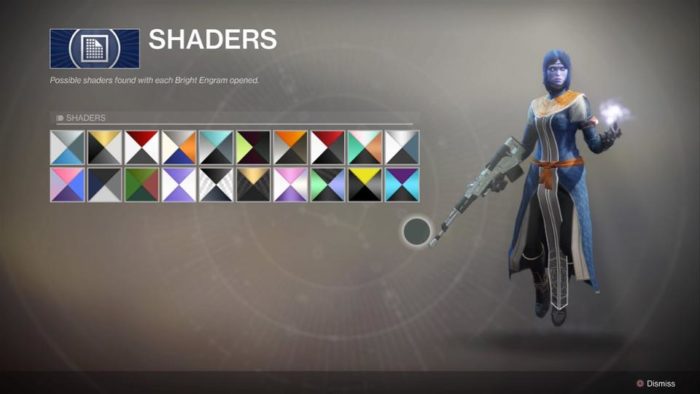 Destiny 2 Director Luke Smith has responded to the fan backlash over his game’s new armor shader system, and the response is probably not the sort of thing aggrieved fans wanted to hear. In a series of tweets, Smith detailed how the system is meant to work and why the team at Bungie designed it that way.

“Shaders are earned through gameplay: leveling, chests, engrams, vendors,” tweeted Smith. “We expect you’ll be flush [with] Shaders as you continue to play. When you reach level 20, Shaders will drop more often: vendor rewards, destination play, and endgame activities.”

In addition to unlocking shaders through gameplay, Destiny 2 players can also now purchase them through microtransactions. This was one of several changes to the original Destiny’s shader system that has sent, at a minimum, tens of thousands of fans into a frenzy on online message boards. Bungie also changed shaders from being permanent unlocks to being one-time use consumables and from coloring in a player’s entire armor set to coloring in only a single piece of armor.

“Shaders are now an ongoing reward for playing,” continued Smith. “Customization will inspire gameplay. Each planet has unique armor and Shader rewards. With D2, we want statements like ‘I want to run the Raid, Trials, or go back to Titan to get more of its Shader’ to be possible.”

Many fans were hoping their vociferous complaints would convince Bungie to adjust the system, with some fans calling for a microtransaction boycott and at least one even advocating (presumably hyperbolically) for “a public beheading for the dev who made this bad idea happen.”

Smith’s explanation of the new system attempts to assure fans that they will have access to a plethora of shaders once they reach level 20 in Destiny. That may come as only a small consolation to fans who continue to rage on the official Destiny forums and subreddit. The crux of their complaint isn’t that they won’t be able to accumulate enough shaders; it’s that they’ll have to permanently abandon an acquired shader whenever they want to switch to another one.