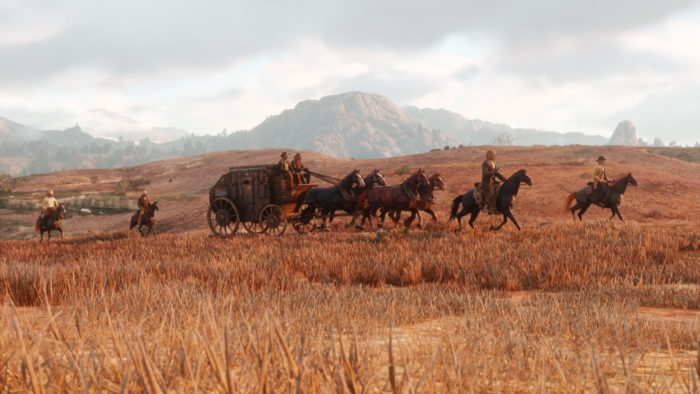 Unlike other publishers that spend enormous amounts of money on elaborate marketing campaigns, Rockstar hasn’t felt the need to start generating hype for its latest game yet. Despite only being months away from its impending release, all we’ve seen from the hotly anticipated title Red Dead Redemption 2 is a thirty-second teaser trailer: no gameplay, no details on its narrative, and no word on multiplayer. And it’s that last part, in particular, that has everyone on the edge of their seat: what is Red Dead Redemption 2’s “brand-new multiplayer experience” all about?

By the time it releases, it will have been eight years since Red Dead Redemption became a smash hit on PS3 and Xbox 360. The third entry in the series firmly planted a flagpole in the ground, teeing it up as one of the industry’s major franchises; lauded for its breathtaking visuals, sublime storytelling, and a unique, wild western open world.

A lot has changed in those eight years, though. We’re in a new console generation, for a start, and RDR2 will be the developer’s first title developed specifically for that hardware. Most importantly, however, a rather large phenomenon called Grand Theft Auto V happened, and its online component utterly exploded in popularity. We already knew, of course, that GTA was a monster franchise, but nobody could quite have predicted quite how long its online legs would carry it.

Putting Grand Theft Auto V’s commercial success into words is always fun — a mind boggling $1 billion of retail sales in its first three days on the market is a truly ludicrous figure. But there’s an arguably more significant and more up to date statistic: GTA Online has generated over $700 million in revenue alone since it launched in 2014. Five years after its release, it is the multiplayer aspect of the game that has seen it continue to dominate NPD charts and weave the game ever more into the fabric of pop culture. Perhaps these lucrative returns explain why Rockstar hasn’t felt the need to waste money developing any single DLC.

So what does this mean for Red Dead Redemption 2, then? The developer has been shy on providing details, recently insisting that it won’t compete with GTA Online. But while that might be true with regards to the audience the differences in thematic setting will attract, it’s hard to see how the two won’t be sharing a similar space. It would be hugely surprising if Red Dead Redemption 2’s multiplayer doesn’t take big cues from GTA Online considering the astronomical revenue and player base it has garnered.

GTA Online is a much different game than when it first launched back in 2014. There is a wealth of content that has been added to it since the early days of wobbly server connections and limited gameplay options. There’s literally an entirely new GTA game to be explored, and if Rockstar can quickly implement that same experience to a Red Dead game, then that’s something to be excited about.

Importantly, though, it has to execute lessons learned with regards to connectivity problems. It took far too long for GTA Online’s servers to stabilize properly, and it also took too long before heists were introduced. When heists did finally arrive, larger updates become more common, but there was still that long wait that was punctuated by cars and weapons that were cool but reminded players of the bigger content drops they were waiting on. A Red Dead Online experience doesn’t need the glitz and glam of weapon skins, new vehicles, or other baubles that don’t lend themselves to the deeper core of the game as a whole. If Rockstar would instead focus on content such as heists, or other story rich activities, it would suit the world of Red Dead Redemption much better.

It doesn’t take much to imagine Red Dead Redemption Online succeeding in merging online modes and story-content, but it would need to approach the focus of multiplayer content differently. While similar, Red Dead and GTA are two fundamentally different games, Rockstar needs to find a way to focus efforts more on substantial narrative offerings within its online component — something that has been lacking in GTA Online. Maybe not a full scale MMORPG, but there are so many awesome possibilities that could be introduced to a persistent online world: the option to play as a good or evil faction; story-heavy heists that are as engaging and deep as some of those found in GTA Online (train heists… obviously); a multiplayer hunting feature across the game’s wilderness; a gambling card mini game that ties into wider plotlines. Oh, and a multiplayer Undead Nightmare sounds pretty darn cool.

Perhaps the biggest obstacle standing in the way of RDR2 Online’s success is the aggressive play called “griefing” that often spoils multiplayer. GTA Online is no exception, the problem still a cause for frustration despite measures that Rockstar has implemented to combat the issue. So much of what was cool about Red Dead Redemption was taking in the serenity of its world, observing the goings-on of wild western towns, and getting lost in the immersive nature of it all. I can’t help but feel that might get muddied if the world was as similarly brutal as GTA Online. It isn’t an easy system to police, mind you, but perhaps there’s a way to make aggressive play fit within the context of the world? A bounty mode, for example, that puts a price on the head of those that continually grief. Or, if good and bad factions were introduced to its online world, greater bonuses for those that play on the side of good. Nobody wants Read Dead Online to be void of action and violence, but it would be nice to have it measured more appropriately.

However large the scale of RDR2 Online, let’s keep our fingers crossed that lessons learned during GTA Online’s growing pains are a positive influence. Equally, that while we hope Rockstar finds a way to implement exciting, story-rich game modes to its multiplayer, that doesn’t necessarily come entirely at the expense of single player DLC, as it so far has for GTA. RDR2 Online carries so much potential, but ultimately it must be handled in a careful and measured way if it’s going to be a true success.