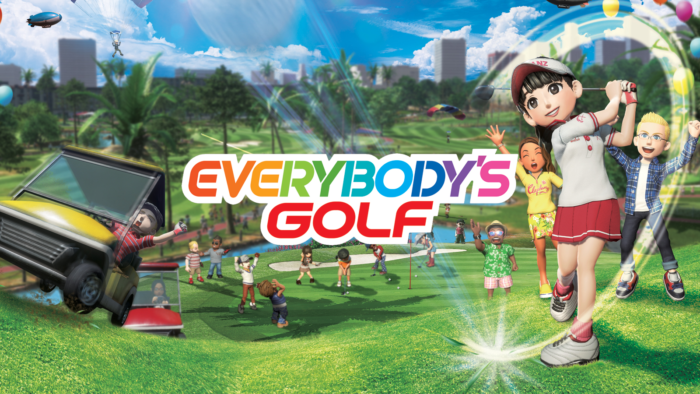 Everybody’s Golf may not be a title that is familiar to many in the US. It is what the Hot Shots Golf series was known as in the rest of the world, and eleven games for console and portables were released under the name between 1997 and 2011. The series differentiated itself from the other simulation style golf titles with its own quirky, lighthearted style that focused on the fun side of the sport rather than its intricacies. Now, six years after the last one, Everybody’s Golf has returned deeper and more detailed than ever before while continuing with its signature style.

The world of Everybody’s Golf is made up of vibrant colors, detailed courses, and wacky characters. As you play, you’ll be challenged by unique golfers of all ages and personalities. Early on, you’ll test your skills against a ten year old boy who is just starting out in the golfing world. Later on, you face off against a German racing enthusiast who is getting into golf because he wants to race around in golf carts, and then there is an old fisherman who uses golf as a way of finding new fish. There are many more unique personalities and they all have their own ways of moving and talking (all of them complain to the organizers about having to use standard cups rather than easier ones) and they’re invariably funny, off-the-wall characters that add to the humor of the entire game.

The courses are also densely populated, with hundreds of golfers and spectators roaming the fairways as you play. They’ll start dancing and celebrating in front of you as you try to sink a putt and the Tee Spot is often crowded as you attempt to take your first shot. The upbeat music that plays throughout also matches the way the characters act. It’s playful and never takes itself too seriously, matching the game’s presentation of the sport itself. Just as has always been the case with the Everybody’s Golf series, the game’s atmosphere is constantly lively and a joy to be a part of.

The golf itself has also remained largely the same, with the three-press shot system returning. To take a shot, you press X three times – once to begin the swing, once to set the power, and once to try to perfect the impact. It is a simple mechanic but one that allows for you to be precise and push your character’s abilities to the limits. The perfect impact gauge changes size depending on what club you’re using and where the ball lies. It’s easy to understand but punishing if poorly executed. Missing the good impact area by a millimetre or two can see your shot fly twenty yards off course, landing in a strategically placed hazard. There are also other mechanics that add to the precision of each shot. You need to keep an eye on the wind and maximum distance of a club at all times to get an idea of where your shot will go, you can add spin to the ball to make the most of long drives or keep a pitch on the green, and you can upgrade the stats of every single club at your disposal. Everybody’s Golf’s interpretation of the sport is surprisingly deep and the result of a well calculated shot always makes playing rewarding.

Both the joyful tone and fun golf mechanics are central to the single-player and multiplayer modes. The main single-player mode first sees you create your character, which is something that is important to a lot of fans of the series and is a feature that has been significantly beefed up in this new entry. There’s hundreds of clothing and accessory items to choose from for you to create the perfect caricature of yourself or to create a version of someone else. You may have seen Shuhei Yoshida playing as himself in Everybody’s Golf at E3. His character wasn’t a specially designed one, he was made using the items in game. That shows how many options there are when it comes to creating characters and fans are sure to sink plenty of time into creating the perfect one. There is an issue with the character’s animations themselves, however. Facially, they aren’t of the same quality as the rest of the game. On the courses, we’re treated to expansive vistas but the characters often look like poorly animated Miis. Cartoon style characters do fit the aesthetics of the game but that’s no reason for why they should look significantly worse that the rest of the game.

Once you’ve made your character, you take part in tournaments to level up your character, climb the ranks, and face off against VS characters. With progression being tied to your character in terms of golf level, rank and club level, alongside additional unlocks that are granted along the way, there is always something to aim for, making the progression compelling. Hitting the courses to set records and improve, each time under different circumstances, with the aim of reaching the next rank, makes for a well designed system that makes the most of the excellent gameplay.

However, Everybody’s Golf holds too much back in the early stages. You’re only given access to one course from the start and you unlock one more every time you climb two ranks. Due to the length of the game, that means you may be playing for upwards of 15 hours before you unlock the third course, which can make progression tedious at times. Also, both the fishing mini-game and golf carts, both of which are fun and well designed distractions, are unnecessarily hidden away for a similar amount of time. This issues also carries over to multiplayer where, if you haven’t unlocked a course in single-player, you can’t play on it online, which can make for some pretty empty lobbies on some courses. How comfortable you are with the staggered introduction of content depends on whether you enjoy the loop of replaying courses multiple times to become a better player.

Everybody’s Golf has also been given a huge overhaul when it comes to the multiplayer offerings. Rather than simply hitting the pre-set courses alongside friends, Everybody’s Golf’s two modes feature an MMO style open-world design. In open-course you can choose to play standard courses or you can roam an entire course, playing the holes in whichever order you see fit, messing around in golf carts and fishing to your heart’s content. It grants the player much more freedom and makes for a much more relaxed experience. Then there is Turf War, a mode that pits two teams against each other, playing as many holes as they can before the time runs out. Players add to a team’s score and the team with the most points on each individual hole wins that hole. It adds a sense of tension to Everybody’s Golf that isn’t present in any other mode and it’s hilarious seeing players run around a course, frantically trying to reach the next hole in time. As as spectacle, it is nothing like real-world golf, but it perfectly matches the style of Everybody’s Golf and adds something to make playing with friends even more enjoyable.

There is a small balancing issue that crops up online, however. Since the more you play, the better you become with each club and the further you can hit a ball, some people online are simply better than others due to having played the single-player for longer. It doesn’t make a huge difference but online success shouldn’t be down to how much time you have sunk into the single-player.

There are a few design and progression issues but, ultimately, Everybody’s Golf is a triumphant return for the series. The golf gameplay is deep yet simple enough to fully understand, there is a huge amount of content both online and off to get stuck into, and the light-hearted tone and style make the world a joy to spend time in. It is the perfect golf game for seasoned players and newcomers alike.