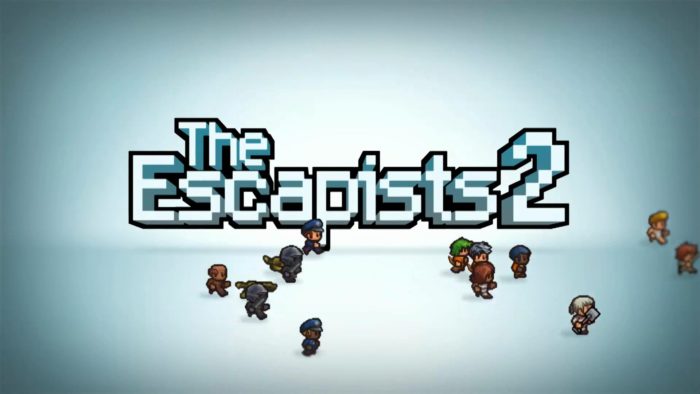 It’s 7 AM and you’re standing out in some cold yard. Other people are lining up beside you, wearing orange jumpsuits, or geared out for whatever menial task they’ve been assigned to for the day. Some officer in full riot gear stands before you making cheesy jokes, praising a warden, and talking about horrible food. Just a day ago you were on some beach, telling your friend how you got away from this same torture before, but here you are again, confined between cement walls and steel bars. But this is The Escapists 2 and you will find a way out by hook or by crook.

If you’ve never played the first game, the premise is pretty simple. You find yourself in a prison of questionable security and you, as an inmate, must figure out how to get out of there. It requires planning, making deals, learning patterns, and learning the ins and outs of the prison you find yourself in.

Its most charming attribute is its presentation. The Escapists 2 is absolutely adorable. Everything is presented in these cute little sprites that pop with color making everything feel clear and distinct, while still managing to work well with everything else. But you shouldn’t let the cuteness fool you, this is a challenging, and sometimes violent game.

The Escapist 2 affords you lots of freedom on how you choose to go about your escape. As you play, you’re given only one real form of guidance which is this golden arrow that keeps you on schedule for things you’re supposed to do as an inmate – go to work, show up for roll call, get your chow, exercise, etc. Outside of that, you can respect the rules or be as reckless as you so please. There are other inmates going about their own schedules as well as guards endlessly patrolling the grounds. You can interact with them as much or as little as you want, just be aware that there are consequences.

I was personally trying to keep a low profile, so I followed my schedule and made money by completing tasks for other inmates. Things like finding contraband, stealing back commissary, or just fixing some instruments. Over time the requests became a bit more challenging, such as getting people to lose their jobs so another inmate can claim it, or beating someone up. At all times I was free to accept or decline any favors requested, but just seeing how far I could go was pretty darn fun. Also, when tasked with beating someone up, I just needed to see how that worked out in the Escapists 2.

There are a lot of factors that come into play when fighting. For one, you have stats that you can increase by doing things like lifting weights and exercising. This offers stronger hits and faster movement. Charging up hits lets you do more damage at the expense of more stamina, and you must master your block to make sure you don’t get knocked out. Then there are weapons. If your opponent has them, you want to steer clear If you have them, well, make good use of them. Finally, you have the guards, an entity that adds a layer of required planning to everything. If the guards spot you doing anything inappropriate and against the rules, they’ll pursue you and ultimately beat you up and sometimes even send you to solitary confinement (depending on your offense).

The guards of The Escapists 2, as simple as they are, help to provide a healthy challenge. As I said before, you can escape however you decide, putting work into your plan and starting to copy keys or dig tunnels. But there’s always someone trying to catch you, and if they do, you’ll have to start all over. That game of cat and mouse, trying to find blind spots in security and learning their routines, is the best part of the game. Presenting myself as the model inmate who never missed a beat, but finding a room that I could start digging through, and learning the plans of the vents above my cell, while avoiding wandering eyes was my true goal.

It felt great when it all worked out. All the patience, the crafting, the figuring out which way would probably work out best for me, I felt truly rewarded, which is something I didn’t expect. After the incredibly slow start I had after being a new inmate, I thought I would be stuck forever. But you learn over time and start to realize that you really can succeed, even without any major hand-holding.

The Escapists 2 preview build only gave me access to a a couple of penitentiaries, but they were more than enough to get the feel of what this sequel has in store. There’s a much deeper experience here than the visuals let on, and it’s coated with a healthy dose of humor that kept a smirk on my face throughout my time with it. If Team 17 can continue to insert more of that challenge, while providing more varied prisons that really test your ability, fans are going to be in for a seriously good time.