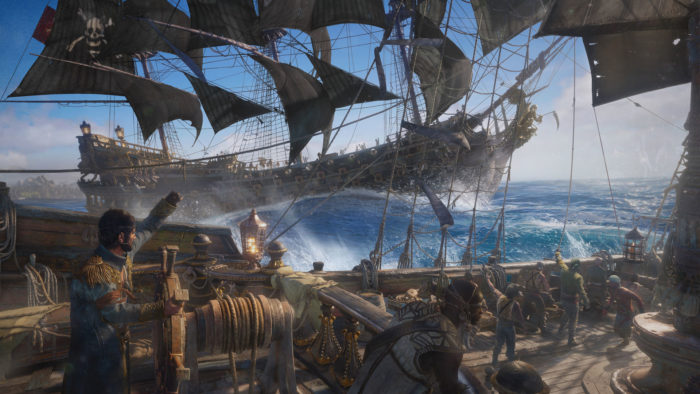 To be completely honest, I’m not sure what I expected from Skull and Bones as I headed to play the game at E3 this year. It was just a few days ago by Ubisoft, and I got several different vibes from it. On one hand it seemed as if it were a more realistic take on Microsoft’s upcoming Sea of Thieves. Pirates are popular, and seeing the potential of Rare’s product should undoubtedly inspire other developers to dive into the area. On the other hand, I saw a potential Assassin’s Creed IV: Black Flag spin-off. A game that would capitalize on the solid naval combat of Ubisoft’s highly praised Assassin’s Creed sequel. It turns out that I was only partially right in my vibes, but the Skull and Bones is entirely entertaining, even though you probably wouldn’t expect it at the start of a game.

Skull and Bones is not the wide open pirates life simulation that Sea of Thieves is setting out to be, at least not at the moment. Instead it’s a multiplayer game that sees players take fully equipped pirate ships out to sea in order to prove their dominance. The only thing that matters is treasure, and you must stop at nothing to obtain as much as possible while playing. To facilitate this, Skull and Bones presents a combination of Black Flag’s strategic naval combat and For Honor’s approach to combat.

The mode I got to demo had two teams of five vying for treasure that was scattered about the sea and being carried by merchants. In the beginning you can’t even see the enemy team because they’re on the opposite side of the map. All you see is a beautiful vista, perhaps some floating gold, and some defenseless ships that you can take out in order to claim their valuable booty. It’s simple enough, and while not particularly challenging, it’s fun. That lack of challenge dissipates, though, once you and your enemies come within range of one another. You see, both teams are trying to take out the same merchants, and in a quest to claim all of the treasure, you’ll find yourself hunting enemy players as well as AI controlled vessels, and that’s where things get interesting.

During our demo there were three different classes of ships that fit your usual combat archetypes. You had the large, tank-like ships that could deal massive damage and take just as much, but were slow on the water. Then there were the Marksmen ships which excelled at long-range combat, picking away at enemies from a safe distance. Finally were the Bruisers, quick ships that packed quite a punch and were built for close entanglements with merchants and enemy players.

There was a nice ebb and flow to combat as each side pushed into the other’s territory, but the tension rose once a player started collecting too much treasure. At this point they would be marked as a high value target, letting all players (both friend and foe) that this particular individual is carrying a large sum of gold. Enemies are now extra motivated to track this player down in hopes of boosting their own gold reserves, and allies will look to swoop in to try to protect their wealthy friend. The scrambling kept nerves on edge because when a player died they lost half their loot, or all of it if they happened to be boarded. It created a tug-of-war scenario as gold changed sides with each and every kill. After around 10 minutes, the military would show up and all players would have to flee for safety, taking their gold with them. You’re not safe though until you reach the point marked on the map and are still vulnerable until you get there.

I’m not going to lie, each match left me feeling energized as I clawed my way through massive boats made of wood and steel. My Bruiser slammed into large ships and closed gaps between myself vicious snipers. I plundered countless merchants, and leveraged wind currents and rock placements to get the drop on unsuspecting enemy pirates. It was truly exciting and outright fun.

My only concern is that it won’t be enough. For Honor also had some solid combat, even with its issues, but it wasn’t enough. Thankfully it looks like Ubisoft is looking to make Skull and Bones into much more. According to the game’s official site players will be able to build up a gang as they rise through the ranks from upstart captain to powerful leader. The initial reveal even hinted at the possibility of monsters.  These are two elements that we weren’t able to play around with at E3 2017, but hopefully they can be delivered on. The gameplay itself is solid and I could easily see myself losing hours to it. But it needs something more, and it looks as if the promised elements that will build up around the strong naval combat need quite a bit of time.

In the mean time, Skull and Bones feels like a true evolution of Black Flag’s naval warfare, and I could’ve easily seen this as a multiplayer mode for that game. There’s something worthwhile here to build on, but only time will tell if it evolves from the fun experience it is right now into a full fledged game.