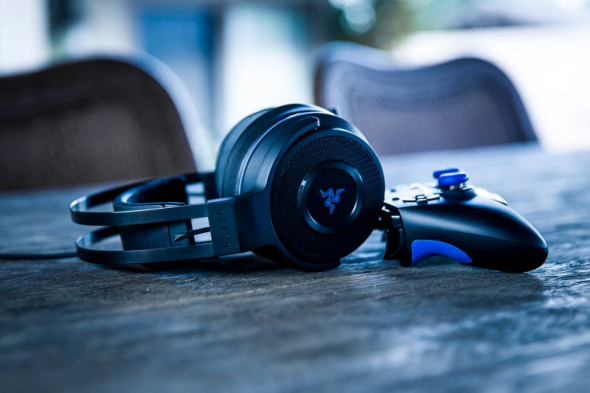 E3 2017 was all about gaming, as it should be, but that doesn’t necessarily mean it was all about software. While video games are a highly integral part of the gaming experience (most would say the most integral part), the hardware we use to experience these worlds and characters is just as important, and we’re not talking about just consoles either. Razer used E3 as an opportunity to announced their plan to fully step into the console gaming market, and they’re kicking things off in the west with a new gaming headset, the Razer Thresher, a very comfortable, premium headset that Razer is hoping provides them a solid foothold in the console space.

The look of the headset belies what lies beneath the surface. It’s a solid piece of hardware with no extravagant bells and whistles. It’s a very simple looking headset. In fact, the only difference between the Thresher on the PS4 and the Xbox One is the color of the Razer logo and the ring around the ear pods (blue for PS4, green for Xbox One). However, as we all know, it’s not the look of a headset that makes it a must-have, but rather the comfort and sound quality, and the Razer Thresher has both of these in spades.

At E3 2017 I got to take the Razer Thresher headset for a test drive, and, from my short time with the gaming headset, I was left thoroughly impressed. When it came to designing the new headset, comfort was one of the primary factors that the company knew it had to nail. Many gaming sessions can go on for hours, and thanks to the console headset marking being quite large, it was easy to see what types of headsets players gravitated towards. Razer is, of course, no stranger to creating these types of devices, as they’ve been creating PC gaming headsets for some time, but they wanted to take their approach to the next level. To do so, they went with a reinforced double band for your head so you can get that snug fit without feeling the weight or sometimes odd curve of the headset. The leatherette ear cushions utilize memory foam for comfort that doesn’t place a ton of pressure on your ears, while also providing some noise isolation so you can hear what’s coming through the speakers much more clearly. For the Razer Thresher, they’ve even gone so far as to create a slot within the ear cushions for glasses to be worn comfortably at the same time as the headset. And for those who, like me, have larger ears, you’ll be pleased to hear that the cushions are quite large, allowing them to be worn much more comfortably.

Like with other Razer headsets, the earpads can be swiveled when not being worn so you don’t have them trying to strangle you while take a break, and they also pivot to match the angle of your head and ears. As I sat there playing some matches of Injustice 2 to get a feel for the sound quality, I couldn’t help but keep pushing and adjusting them to see if I could possibly find a spot that wasn’t comfortable. Good news, I didn’t. If you personally don’t find the ear cushions to fit the comfort level you were looking for, Razer will be selling two different sets of ear cushions separately as well. One is a more oval shape which can cup your whole ear if that’s what you prefer, and the other is meant to be refrigerated so that you can keep your ears cool. It’s a bit firmer than the standard cushions, but still felt great.

Once I was done marveling at the comfort, it was time to get into the sound, which was crystal clear. They made a point of telling me that they used 50 mm drivers, which they felt was integral to provide powerful, lifelike audio. It uses 7.1 Dolby Surround Sound (which is easily enabled or disabled from the packed-in stand/audio hub). That stand, by the way, has two antennae built in to ensure you never drop signal. It was explained to me in technical jargon that is above my area of expertise, but the gist was that it can catch the waves at any point due to the dual antennae, ensuring you always have clear sound while playing and chatting.

If you want to take a look at the full product feature specs, you can check them out below.

For those into the more technical side of things, the above should indicate how serious Razer is about making the Thresher one of the best gaming headsets on the console market. The end result was a pair of headphones that was surprisingly comfortable and offered some truly great sound during my time. Of course, I didn’t get a chance to put the battery life, charging time, long sessions, and time with different games to the test (though I will have a full review done in the near future). As my preview time went, though, I was thoroughly impressed with what was being put forth, especially since it’s being priced as a premium product at $249.99. It’s a steep price for sure, but the fact that each version also works with PC (so PS4/PC and Xbox One/PC) is a bit of a consolation for the investment. I do wish one worked on both, but there are reasons for everything I’m sure. Either way, the Thresher is looking like a very strong step into the console space for Razer and I look forward to what comes next.