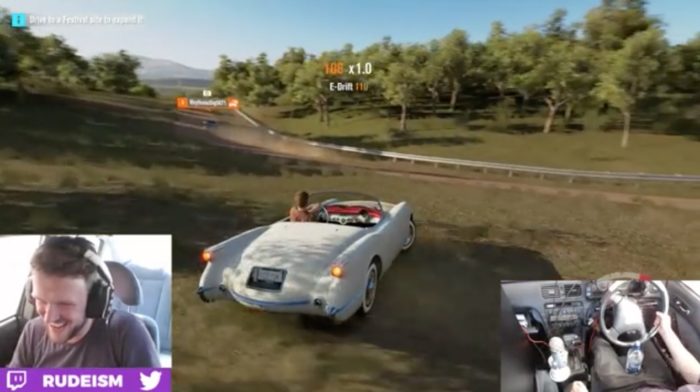 When Forza Horizon 3 was first released back in September 2016, it received a ton of praise for its incredibly impressive mechanics. Yet again, the Forza series accomplished what it does best—create racing games that feel so authentic that any true car lover would easily become infatuated with this virtual experience. Well, one streamer on Twitch really took things to the next level and made Forza’s driving experience feel about as authentic as it can possibly get without actually sliding into the driver’s seat of an expensive, powerful sports car.

Rudeism is known for creating some mind-blowing custom controller setups, like when he used an actual broomstick and a Nerf gun to play Overwatch as Mercy. This time around he’s giving Overwatch a rest and turning to Forza Horizon 3 to shock and amaze his viewers yet again. Rudeism managed to convert his actual car’s steering wheel into a controller that he can use to rip through Forza’s stunning world. A few of his off road mishaps served as hilarious reminders that pushing these kinds of cars that fast around twisted, winding roads isn’t nearly as easy as conventional controllers and keyboards might make it seem at times. It does, however, look just as fun as you would have imagined.

Here's a cheeky GIF of yesterday's stream. There's definitely some improvements to make on the next car controller, but I'm happy with it! pic.twitter.com/g97S0Ifg5L

When this New Zealand-based gamer isn’t busy turning everyday items into crazy video game controllers, he’s actually busy designing mobile games. In addition being a new official Twitch partner, Rudeism is a game designer for independent game developer Runaway. Of course, that’s not what most people know him for. Most people know Rudeism for his crazy Overwatch controllers that are made with specific heroes in mind. He managed to play Winston on Overwatch using a banana controller and exchanged the keyboard and mouse for a Nerf bow when it was time to play Hanzo.