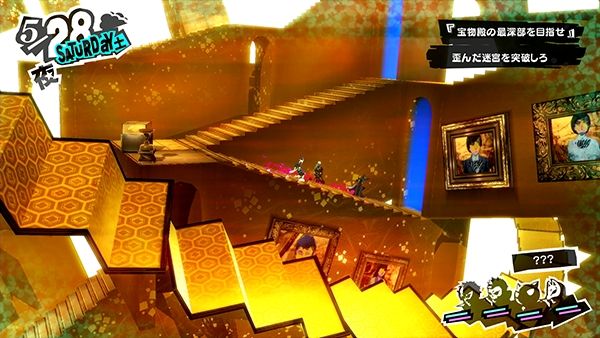 After years in development, Persona 5 is almost an amalgamation of the best elements of previous games in the series. It doesn’t drastically alter anything about the Persona formula, but mostly makes minor changes where it needs to. However, the most prominent change in Persona 5 comes in the way of dungeons, known as Palaces this time around. Atlus opted to make dungeons a pre-made linear affair this time, instead of having randomly generated floors. This helps give each of the Palaces in the game a distinctive feeling based on characters’ personalities, while also providing new and exciting objectives to tackle.

While Persona 3’s Tartarus was basically just a massive hollow dungeon, Persona 4 did something similar, trying to inject a bit of personality into its dungeons. Each one was themed around one of the main characters of the game and their insecurities, such as Rise’s being a strip club or Kanji’s being a bathhouse. Unfortunately, there were only a few floors in each dungeon that are always the same, while the majority of them are randomly generated.

While the visual design of Persona 4’s dungeons generally worked, the randomness of them diluted some of the experience, making it feel like just another dungeon-crawling slog. Persona 5 luckily avoids this by giving each dungeon a set path to follow, as well as puzzles and areas specifically designed around characters’ personalities.

Palaces are the major focal point of Persona 5, outside of living your everyday life. Because of this, you’re going to spend a lot of time in them, even being put on time limits to complete the dungeons. Palaces tie directly into the story by being manifestations of the warped emotions of people in the story of Persona 5. For example, the first Palace you encounter in the game is a grand castle ruled by Kamoshida, the volleyball coach of Shujin Academy. This representation manifests because of the way Kamoshida views the school – as his own personal kingdom where he can do whatever he wants.

Each and every dungeon in Persona 5 is a delicately crafted look into someone’s psyche, and every piece is a representation of that. Beautiful pictures of Kamoshida hang on the wall, the female figure is worked into the basic design of the building, and the volleyball team is locked in the dungeon. The very first thing you’ll notice about each Palace is just how visibly striking they each are. They all look remarkably different, and do a great job of representing their respective characters. One Palace is a gaudy and fake museum representing the fake facade of its owner, another is a maximum security bank hoarding all of the money its owner swindled from the people of Tokyo. Each one has a visual theme that ties into the distorted emotions of its owner, a smart way to spice up the aesthetic of dungeons and not have them looking too similar.

Beyond just the aesthetic, however, exploration in each Palace is customized to fit it. This isn’t as clear in Kamoshida’s Palace, as the game is still introducing elements to players, although it does have some puzzle elements based around switches. As you keep advancing, however, each Palace feels more and more unique. The second dungeon has you jumping into pictures to find a way forward, and identifying the real painting out of a group of fakes. Meanwhile, the third involves shutting off security cameras and undoing a giant lock. By having specially designed dungeons, Persona 5 is able to focus more on puzzle solving, exploration, and personality. These puzzles are generally never too difficult, but enough to break up the action, and make you pause to think things through.

In Persona 4, dungeons began to feel all too similar, besides a few small gimmicks. After all, you’re just running through randomized floors with different backdrops. This isn’t even to mention the monotony of Tartarus in Persona 3, where it’s 100 floors of grey walls. Persona 5 realizes the mistakes of its predecessors, and tries to keep things fresh and interesting with each dungeon. Every single Palace has some kind of gimmick or puzzle-based challenge to solve. On top of that, the final boss of each one has a gimmick you can exploit in battle too, making it more than just another boss battle.

Persona 5 also manages to balance difficulty into all of this, accounting for the players that want more of a challenge. Of course, the obvious way is by providing alternate difficulty levels, but the game also puts a big emphasis on staying unseen. You need to sneak around inside dungeons and use cover to ambush enemies, as not getting an ambush can really put you at a disadvantage. Enemies hit really hard in Persona 5, so getting that preemptive strike is everything, letting you knock down enemies and do a hold up. In addition to this, each dungeon has a security level, and getting spotted by enemies raises this. If the level reaches 99 percent you can get kicked out of the Palace, something you want to avoid at all costs. The linearity of these areas also make it much easier for the game to liberally reward you with set treasure chests and items.

Because of all this, the dungeons in Persona 5 are methodical experiences. You have to piece your way through them, keeping an eye out for enemies and treasure. You have a limited number of days to complete each Palace and you want to grind through as much as you can in one day. This adds a level of resource management into things as well, forcing you to decide whether you want to keep going and chance being wiped out, or pull back for the day.

There’s a definite sense of progression in Persona 5, and the game does a good job of showing you when you’re close to the end of a dungeon, sometimes straight up telling you when you talk to your party in safe rooms. Each Palace starts with you having to secure an infiltration route to its owner’s treasure, then sending a calling card the next day in the real world to let the target know you’re coming. This integrally ties the dungeons into the main story, making them flow well into the main story and feel less like a strict dungeon experience.

The other factor that makes Persona 5 even better, is that randomized dungeons still exist for those that want them. This comes in the form of Mementos, a sprawling subway system that the party can enter on any given day. There’s plenty of incentive to enter Mementos too as you can gain tons of experience, money, items, and tidbits of story. It makes for an occasionally refreshing break from the main Palaces, when you just need to grind and level up a bit.

Persona 5 really did make the right decision in doing away with randomized main dungeons, however. Atlus did a great job designing each Palace, both visually and with gimmicks and puzzles. The linear nature really lets the game double down on emulating the hearts of characters, and making each experience wholly unique. Each dungeon gets more complex as you go through the game, but you also get more time to complete each one. It’s a scaling system that feels natural, while the game keeps its dungeons diversified in theme and look.

Hopefully the Persona series continues down the same path with whatever game comes next, only improving on the formula that 5 provided. At the same time, other JRPGs should definitely take note of how varied Persona 5 managed to make its dungeons in both look and feel.