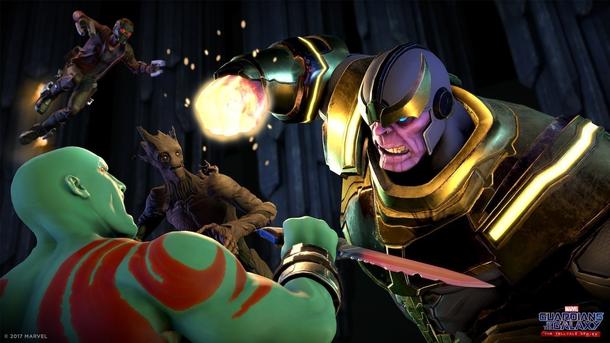 After a series of screenshots and the announcement of the voice cast, Telltale has given us the release date for their upcoming episodic series for Marvel’s sci-fi superheroes, the Guardians of the Galaxy. The debut episode–titled “Tangled Up in Blue–will arrive on PS4, Xbox One, Android, iOS and PC on Apr. 18 for $5. Further, there’ll be a season pass available for the full five episodes beginning May 2 for North American and then the 5th for international gamers. Conveniently, that’s also when the second film drops, so it’ll make for a bit of a double feature. Below, you’ll see the box art for the season pass disc.

In addition to the release date news, Telltale also revealed that the Mad Titan Thanos will be the villain for part of the series. Exactly what the Guardians of the Galaxy do to incur his wrath is unclear, but given that Drax wants to kill him and Gamora is his daughter, it’s not like the guy is short on reasons to kill them.