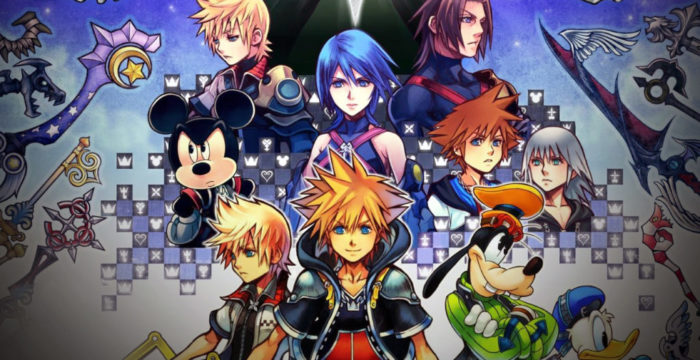 However, unlike its PS3 counterparts, 1.5 + 2.5 ReMIX presents the classic Kingdom Hearts titles in a wonderfully smooth frame rate of 60 frames per seconds. The boost in frame rate is a huge plus for the action RPG series, as the gameplay ends up feeling smoother and more responsive than before. My experience with the game on the PS4 Pro was largely a pleasant one, though the combat is starting to feel a bit dated in this day and age.

There’s nothing inherently wrong with Kingdom Hearts’ gameplay, but in an age where players have gotten used to gaining full control over the camera in action games and intuitive controls where the jump button is bound to X instead of circle, Kingdom Hearts is definitely starting to show signs of wear. The camera can get a tad finicky when you lock on to enemies, and camera control isn’t quite as fluid as I remember it. While exploring the game’s environments, you can tilt the right analog stick to look all around you; but enter certain specific rooms, and camera control is wrestled away from you entirely. They’re small issues, but new players shouldn’t jump into the compilation expecting the kind of polish we’d typically see in action games today.

The action gameplay in the Kingdom Hearts series has never been particularly complex or deep, so veterans shouldn’t expect any changes in that department either. You hit square to attack, and you’ll occasionally use the d-pad to scroll through your command menu to use items and magic spells. Kingdom Hearts 2 and Birth By Sleep add a lot more depth by introducing the finisher moves and different command styles. If you’re looking for any real combat challenge, though, the main story bosses will likely disappoint. You’ll have to look to the games’ secret bosses if you really want to see just how unforgiving the series can get.

Nitpicks aside, Kingdom Hearts HD 1.5 + 2.5 ReMIX is still a really solid collection of classic PS2 titles. The graphics have been enhanced to support 4K on the PS4 Pro, and vanilla PS4 users will still be able to enjoy the game’s good looks in 1080p. Despite my minor gripes with the dated gameplay, I found myself marveling at how great the titles looked. The character models and environments are crisp and colorful, creating a delightful visual experience overall.

Including the Final Mix versions of the games is a nice touch as well, and these come with additional optional content and superbosses. With four full length games and two cinematic movies, Kingdom Hearts HD 1.5 + 2.5 ReMIX is a fantastic collection that will help newcomers catch up with most of the lore and story points they need before the new entry is out.

That said, this compilation isn’t really all that different from the ports we previously saw on the PS3. Aside from the PS4 Pro support with 4K resolution and 60 frames per second, there’s nothing new to be found here. If you’ve already played through the PS3 ports, there’s little reason to dip in again, unless you’d really like to experience the titles with smoother gameplay. It should also be noted that the newly released Kingdom Hearts 2.8 Final Chapter prologue comes packed with a port of Dream Drop Distance, as well as an entirely new game and cinematic movie. Even after working your way through 1.5 and 2.5, you’d still need to pick up 2.8 to get the complete picture of what’s going on in all of the Kingdom Hearts games released so far.

Kingdom Hearts HD 1.5 + 2.5 ReMIX is a quality compilation that will ease newcomers into the series, but be warned that there’ll still be more content you need to pay for in order to fully catch up with the story. And if you’ve already played through the PS3 ports, I’d skip this one and check out 2.8 Final Chapter Prologue instead, or just wait for the inevitable 1.5 + 2.5 + 2.8 compilation right before Kingdom Hearts 3 finally sees the light of day.