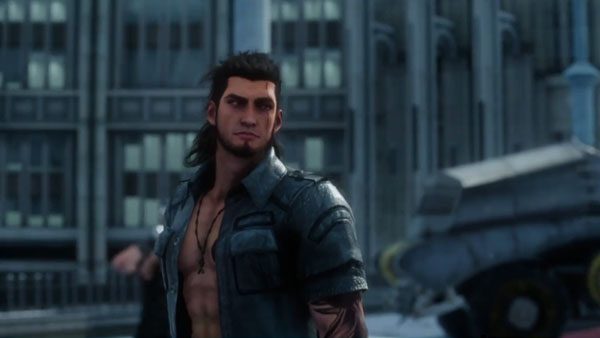 Episode Gladiolus is the first major story DLC for Final Fantasy XV, and, as the name implies, it focuses on Noctis’ guard and all-around beefcake of a man, Gladiolus. At PAX East, we were able to get a little taste of what fans should expect when Episode Gladiolus launches later this month. Without delving into story spoilers, let’s just jump right in.

What we played of Episode Gladiolus features him as the primary controllable player character instead of Noctis, as players would be accustomed to from the main campaign. Unlike Noctis, who prefers to warp around and dodge attacks, Gladiolus prefers taking shots. In fact, he wants you to just f*cking try him because tanking blows builds up a rage meter of sorts. Starting out in a battle, Gladiolus has access to a basic special ability, but as that meter builds, he will eventually gain access to increasingly powerful blows.

Access to these powerful attacks will be important in Episode Gladiolus as what we played saw Gladiolus under constant assault from undead and demonic hordes. It can be overwhelming at first (more so I’m sure on a higher difficulty than what we played at PAX East), but the more people thwacking away Gladiolus the better as he’ll more quickly build up that bar to unleash his massive room clearing attacks that are just oh so satisfying to use.

There’s almost a Dynasty Warriors-like vibe to the gameplay in Episode Gladiolus, at least from the section we got to play. Just welcoming as many enemies as you can handle and then cutting them down with wide sweeping blows. Again, this is likely very different from how most people would use Noctis, but still very fun.

The best part about the demo was probably the pillars that Gladiolus could rip from the ground. While his sword is intimidatingly large already, he can also just rip these massive stone pillars right from the ground and use them as a temporary weapon. Obviously, they deal a ton of damage (otherwise what would be the point?) and it’s incredibly fun to use when you can.

Gladiolus’ rampage isn’t without reason, as he is trying to clear various trials to gain strength. Each trial that Gladiolus faced during the demo featured a trial boss of sorts. Dispatching these bosses unlocked new abilities that helps him to survive even more difficult bosses and increasingly fearsome enemy hordes.

Episode Gladiolus is pretty much exactly what you would expect it to be. It’s Final Fantasy XV DLC, featuring Gladiolus’ tank style of gameplay, where in between sessions of hulk smashing everything in sight, you’ll learn a little more about Noctis’ most physically imposing guard. If that sounds up your alley, and you want more Final Fantasy XV, then you should be all set when this releases on March 28.