Horizon Zero Dawn marks a new chapter for Guerrilla Games. Gone are the Helghast and linear levels of the Killzone franchise. Guerrilla has replaced them with a sprawling open world, lavished with collectibles, side quests, an intriguing story, and formidable mechanical creatures. It’s a drastic change for the developer, but one that has most definitely paid off.

Horizon Zero Dawn takes place in the distant future, but Earth isn’t some ideological haven of cutting edge technology and hovercars. It’s been cast back to the primitive ages, one laced with the legacy of our civilization. The wilds are teeming with a variety of mechanical creatures, while humanity lives on in scattered tribes. Players take control of Aloy, a young outsider who seeks the answers to the origins of this world, as well as some more pressing questions close to home. Aloy has never known who her mother was, and as such has been looked down upon by the nearby Nora tribe her entire life.

From its very opening cutscene, Horizon Zero Dawn’s world lures you in with its mythical sights and sounds. Seldom was there a landscape or stunning view from atop a Tallneck that I didn’t want to capture with the addictive photo mode. But my fascination with the world went much deeper than these cutting-edge visuals thanks to its environmental storytelling. The intriguing lore of Earth’s past, its current state, and the tribes that inhabit it are interwoven to create a dynamic environment that doesn’t always need Aloy to be the catalyst.

As you explore the wilderness, it’s not unusual to see a vulture-like Glinthawk grinding away at the metal carcass of a fallen creature, or for Chargers to sprint across the vast expanses of their territory, their horns demolishing anything that stands in the way. Merchants and NPCs go about their daily lives, with the sun-soaked city of Meridian acting as a cultural hub in this divided world. At times, the worlds of human and machine collide, and on a venture to ascend a nearby Tallneck, I watched as a couple of tribeswomen fending off aggressive Scrappers. Feeling the hero once again, I lurched into action, dispatching the Scrappers with some well-placed arrows to their Radar. Rather than continuing on with their lives, the tribeswomen awarded me for my troubles, shouting me over from the ridge. It’s in these moments that Horizon Zero Dawn’s spontaneity shines, remaining a constant trove of excitement and intrigue to explore. 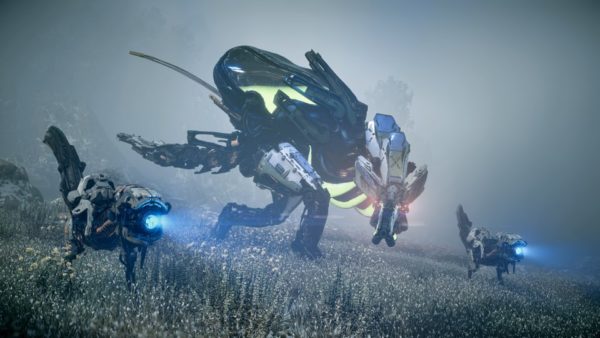 Few sprawling open worlds on Horizon Zero Dawn’s scale manage to install a sense of danger and fear in you every time you explore them. There were a good few times I was caught completely off guard by a tough machine while I was on my way to a quest, leaving me no choice but to take it down. Though there’s always the option to run, a Stormbird or Sawtooth will make light work of closing the distance, picking away at your health bar faster than you can replenish it. These machines aren’t dumb (though they can sometimes have their moments); these are hunters. Groups will circle you, winged variants will use the skies to their advantage, dive-bombing you and keeping in your blind spot to avoid being hit. When Aloy emerges victorious from battle by the skin of her teeth, you can’t help but feel relieved. The machines are the true stars of the show here. Not just because they look great or act so freely, but because they’re a delight to hunt and conquer.

Every machine in Horizon Zero Dawn has an animalistic instinct and feels unique to face off against, and it’s this diversification that makes combat so satisfying. One of my highlights in Horizon Zero Dawn came from strategizing against a giant t-rex robot equipped with missiles, lasers, radar, and a lethal tail attack. Out in a scorching desert, Aloy was pinned behind a large boulder, with the Thunderjaw bombarding her with missiles. To give myself a standing chance, I needed to take these missiles out of the equation. A quick look at my Machine Catalogue – a glossary of sorts that tells you about each beast you discover – identified these launchers as vulnerable to tear damage. When the barrage briefly subsided, I emerged from cover and, using special arrows, tore its missile launchers clean off. Now able to move more freely, I strafed around its side, ripped off the cover to its big mechanical heart, ignited a fuel pack with a flaming arrow, and coaxed it into an explosive tripwire I’d manage to lay. It’s nothing short of a delight when your offensive strategy pays off and a machine collapses to the floor, and thanks to a good variety of machines roaming the world, combat stayed compelling throughout my 30-hour playthrough.

Unfortunately, utilizing Aloy’s other tools, such as traps and potions, can become tedious. Because these are mapped to a large scroll wheel on the d-pad, finding that all-important healing potion or shock trap while trying to sprint away from and keep the camera on a foe is more difficult than intuitive, and serves as an obstacle to the flow of combat. Luckily, it was never a huge annoyance on normal difficulty, but on harder difficulties with more ruthless AI, this becomes a true test of your patience and the preparations. Resource and ammo management are key to your survival in the wild, and you’ll spend a lot of time crafting more arrows or traps for your arsenal. In order to save you from constantly diving into menus, crafting is incorporated into the weapon wheel, allowing you to quickly make more arrows, bombs, or tripwires in the heat of battle. It certainly helps immerse you more in the world, and is especially valuable during an intense battle.

However, there’s one tool that you’ll likely take for granted throughout your time in Horizon Zero Dawn, and that’s the Focus. This allows Aloy to see and interact with items and records from the past. As you arrive at a settlement, the markings and symbols are automatically translated to English, not just on your HUD, but for Aloy too. She can highlight the patrol routes of machines, allowing you to slowly creep from cover to cover while their backs are turned. In combat, scanning a hostile machine will give you a detailed breakdown of its weak points, highlighting their location so you can focus your fire and exploit them. Aloy’s Focus becomes an integral part of not only the combat, but just about everything you do. You’ll often forget you’re even using it, because it fits so well contextually within the game and is a joy to benefit from.

While out on her quest to seek answers, Aloy will also stumble into NPCs, all of which have something she can help them with. Conversing with characters feels natural, though their facial animations can go awry at times. A conversation wheel allows you to either ask questions and pry further or just stick to the basics, and occasionally it will offer different ways for Aloy to respond to a situation. It was a neat idea, but rarely did I actually feel that the options I chose had led to anything remotely consequential.

The small errands and more substantial side quests of these characters aren’t all there is to do in Horizon after the credits roll, though, and that’s why I just can’t stop playing it. I still have Cauldrons – mysterious places that people believe the machines to come from – to explore, Hunting Ground combat challenges to master, and a shedload of collectibles to find. 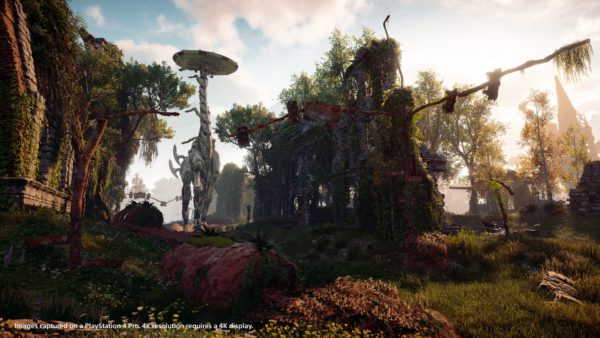 Following Aloy from her early beginnings as an outcast to seeing her single-handedly take down a pack of Sawtooths or a deadly Behemoth felt inspiring. Aloy’s development moves naturally, as if she was truly learning and evolving into a prolific hunter the more she explored the world. This wasn’t just because of the skill points I’d invested in her, but the way she acted and spoke with others. Her stature in society and the values that she stands for are prominent in her interactions, growing more intense with time. She’s a likable, fleshed-out character with a realized personality, and one strong enough to carry a series of this stature.

Overall, Horizon Zero Dawn’s story kept me hooked throughout its duration. Nothing was overly predictable, and character motives never felt too forced. Unfortunately, its final sequence left me with more questions than answers, and it was one that brought into question the events that had preceded it. It wasn’t enough to leave a sour taste in my mouth, but it’s definitely a dissatisfaction that needs to be explored in the likely sequel.

From start to finish, Horizon Zero Dawn’s performance was near-flawless. The framerate didn’t skip a beat, load times weren’t horrendously long, and animations were silky smooth. Guerrilla Games has not only made excellent use of the PS4 Pro, but has ensured that the entire experience shines with a level of polish unparalleled by most games today. Horizon Zero Dawn sounds as good as it looks, as well, especially when it comes to the machines. The loud rumbles of a Thunderjaw stomping in the distance, or the high-pitched whirring of a Watcher’s beam charging up, only adds to the ‘futuro-Jurassic’ ambiance of the world.

Horizon Zero Dawn is a treat to every PS4 owner. Its magical world is a wonder to explore, it controls and looks exceptional, and the unique, modular build of its enemies ensures that combat never gets old. Yes, items could have been more accessible, and I was left with more questions than answers by the end, but these were mere speed bumps in the bigger picture. Horizon Zero Dawn is the PS4’s first major exclusive of 2017, and it couldn’t have gotten much better.