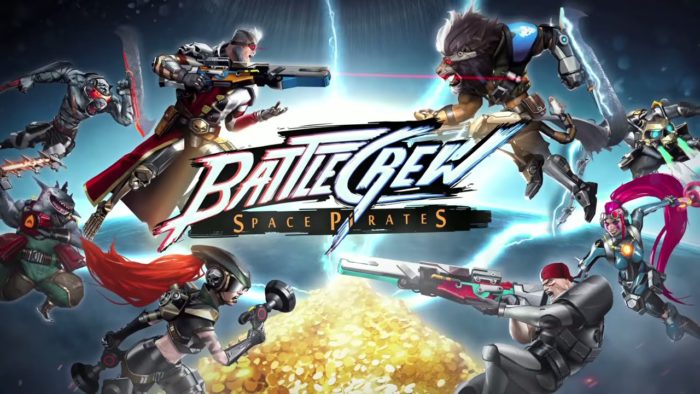 For whatever reason – the parrots, the peg-legs, the nautical crime – pirates have stayed in fashion, and here they’ve been brought from the surging seas to the vacuum of space. For the most part, they’ve retained their charm. The game’s four heroes are distinct from one another, each coming with abilities that give them advantages and complement their team’s ability to tip the balance in any given clash.

The game is a 2.5D multiplayer shooter wherein you’ll be engaged in competitive thievery with teams of up to four pirates, looking to blast, pilfer, and custom-emote your way to gloating victory – and booty. The game’s in early access on Steam now ($7 is the price of admission) and there’s potential here. There’s also, of course, room for improvement.

At present, there are two modes available: Team Deathmatch, and Gold Run. Gold Run is Capture the Flag, the flags of old substituted here with chests of gold. You’ll be hammering the X button to stuff your pockets with coins from your opponents’ chest, before giddily gallivanting back to your own vault to offload your ill-gotten gains. It’s frantic and offers up the usual blend of strategy and mayhem: killing your adversaries will relieve their pockets, and thus ensues a nice tug-of-war as you decide whether or not to steal, support your teammates’ thievery by standing guard, or go it alone and dedicate your efforts to hunting your opponents down with single-minded murder on your itinerary. Team Deathmatch is… Team Deathmatch.

The four playable characters have some nifty tricks to disrupt the flow of encounters. Tiburon – an “enhanced animal” (simply a shark with limbs and ill-intent) – has an Aqua Jet strapped to his back allowing for either quick getaways or ruthless pursuits. He can also build walls, an intriguing strategic proposition which can be used to buy time or block attacks; he can also lose himself in a grenade frenzy, and is able to hurl handfuls at his foes like an octopus’ inky defense mechanism – only more bombastic. These all have cool-downs that vary in length depending on potency.

Aptly-named John Trigger, the sort of everyman that each game of this type offers, he involves the least specializing. He has a balanced blend of abilities: he can scale walls with his magnetic boots, slow down time for his opponents, and launch a powerful rocket dealing heavy damage. Janger, a bi-pedal lion with an English accent, can activate an energy shield to protect himself; a roaring dash, which hurts enemies and boosts him forwards; and a berserk attack, which instantly kills an enemy if it touches them.

Lastly we have Comet, a fast, agile pirate ideal for zipping in and out with a complimentary suite of abilities. She can place floating mines on her path, which can be used for offence and defense; her Sonic Sprint ability gives her blistering speed; and her Supernova powers summon a ball of light that kills her enemies.

The Tortuga is a floating space station hub that you will inhabit between matches. It’s a social space where you’ll be able to decide which mode to jump into, explore customization options – which you unlock by winning games and amassing treasure – and take part in community challenges. Most of this content has yet to be added in, but the potential is there. Right now, running around the Tortuga feels a little more like exploring the USG Ishimura from Dead Space – barren, with chunks gouged out.

At the moment there’s a lot that needs to go into the game: more modes, more characters perhaps, and more maps would all be nice. Outside of that, there are issues with frame rate scattered throughout, connection drops, lengthy lobby stays – these are all things that you’d expect from an early access title, and the developers have said they “hope to add to the content fairly quickly.” They have also said on the game’s Steam page that they are aiming for the early access period to be “between two and six months.” It’s fun to play, barring some technical issues, but it does get tired pretty fast – and that’s exacerbated by the lack of content on offer at this early stage.

Battlecrew Space Pirates is an interesting proposition for Dontnod Entertainment – the studio behind Remember Me and Life is Strange. The game is being developed by newly-christened sister studio Dontnod Eleven – formerly HeSaw games, the studio behind 2014’s Blue Estate: The Game. Previously, Dontnod Entertainment has utilized publishers like Capcom and Square Enix; with this, it’s dipping its toes into self-publishing on Steam. It’s a move that makes perfect sense for Dontnod, a studio that’s been indie in spirit, but not on ledger paper, for some time now. Though there is a certain irony in that its first truly independent project is perhaps its least original – belonging, as it does, to a very crowded genre indeed.

There may not be a pressing reason to want to jump in to Battlecrew Space Pirates right now, given that it is in need of an injection of content, fixes, and buffs. But for $7 the price is hardly a steep barrier for entry, and you’ll be getting a fun competitive shooter that will likely continue to grow and improve, and hopefully cast off the shackles of repetition and shaky execution.