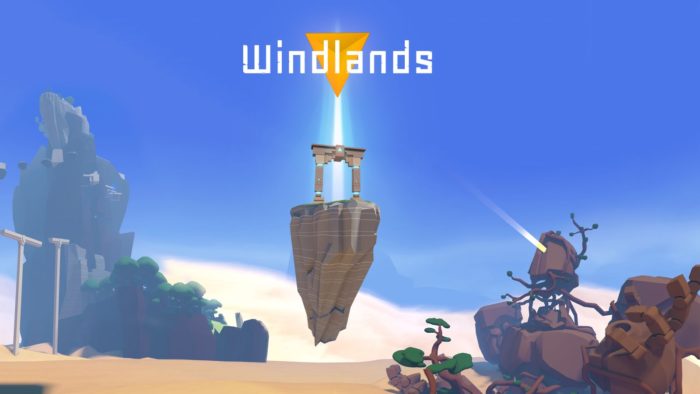 Windlands comes with a warning before you even reach the main menu: “Windlands is an intense, full locomotion VR game. If you do not have your VR legs yet, we recommend short 5 minute play sessions and stopping as soon as you feel any discomfort.”

You’d expect a virtual reality game that sees the player swinging between trees, Spider-Man style, to be a culprit for causing motion sickness and, although it does if you ignore the comfort settings, this isn’t Windlands’ most off-putting aspect.

The game tells a vague story about the ruined civilization you are exploring and your quest to reawaken the giant creatures that built it. It isn’t interesting or important but it doesn’t get in the way of the rest of the game. It takes a back seat, adding context at the end of levels to ensure players have some understanding of the world they are exploring but it isn’t something you’ll be invested in. The tutorial portion is also limited, allowing players to jump straight into the game without being prompted to explore the world in any specific way.

The world you are given is beautiful. Split into three sections – jungle, city, and sky – it resembles a less detailed, but equally vibrant, sky version of the island in The Witness. At the start, you are placed in it with little instruction. You see what looks like portals scattered around on the platforms in the distance and you head out to explore, a grappling hook in each hand to help you do so. Before you is a labyrinth of trees, platforms, and ruins that act as your path to the top, and while observing Windlands’ world from above is wondrous — one of the most visually impressive things I have seen in virtual reality — the struggles of getting there are not worth the reward. 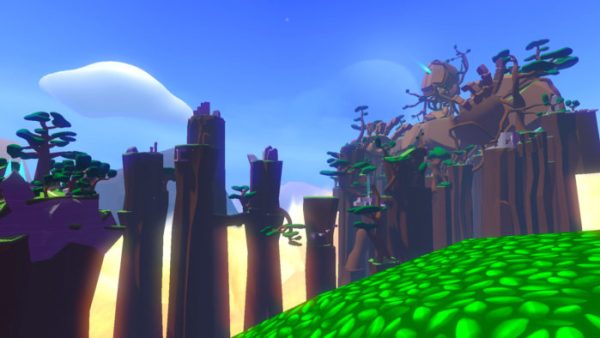 Windlands is built around traversal and the ability to grapple onto trees to seamlessly swing yourself around the world. You would expect this traversal to be the game’s strength; a system that makes you feel like Tarzan and Spider-Man at the same time, yet you are more likely to spend time awkwardly hanging off the side of a bush than you are flying through the air. On normal mode, you are only allowed to grapple onto trees and bushes that are dotted around the map to help you leap between gaps. However, to keep your momentum going, you have to attach yourself to a very precise part of the greenery, otherwise, you crash into the side of it and have to awkwardly drag yourself to the top and start again.

The way you jump, while as simple as you’d expect, doesn’t work as well as you’d hope. The distance and height of your jump are supposedly matched by how hard you press the ‘X’ button, but it feels far more random than that. If you press ‘X’ lightly, you jump forward a little and up a little, and the opposite happens when you hold ‘X’ down, but it doesn’t always happen as you’d hope and you’ll often miss the platform you were aiming for. How far you move once you land suffers from the same issue. You may be leaping towards a small platform or treetop, and manage to get the jump right, but as you land, you slide forward and fall off the edge. Motion can become very frustrating, and it is made worse by the less than generous checkpoint system that often sends you back to the bottom of an area rather than to just before your failed jump.

There is an easy mode that is less frustrating. It allows you to grapple onto any part of the world, whether that be the floor, cliff faces, or trees. It makes traversal easier but it removes the puzzle aspect of the game. Rather than analysing the world and picking a way to the top, you simply grapple into the next object in front or above you until you are there. Easy mode can make simple exploration easier but that isn’t how the game was intended to be played. That intended way of playing doesn’t always work but removing it makes the game’s overall design feel unnecessary. The core of the game itself ends up becoming an afterthought in order to make the gameplay more manageable. 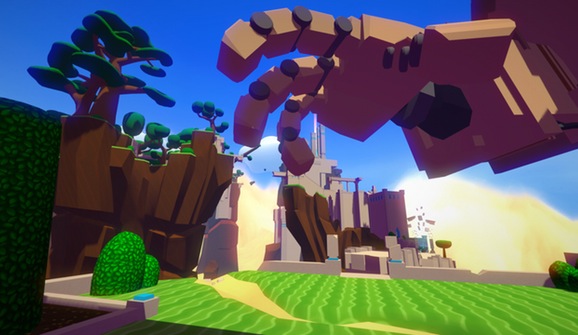 If you were to envisage a virtual reality game in which you are flying through the sky, grappling onto trees to swing yourself to the next area, you would want to look around freely, without any distraction. Unfortunately, unless you are a self-proclaimed VR pro, that isn’t a viable way of playing Windlands. The speed at which you are moving and the unpredictable movement causes motion sickness in minutes. That is to be expected as your body and mind will struggle to comprehend the difference between your lack of movement on your sofa and the movement in game. However, there are comfort options that help. You can make horizontal movement change in segments, camera strafing can be turned off, and you can have a cage (transparent or not) surround you at all times. All of these help trick your mind into feeling stable and, for the most part, they work. I was able to jump in with a few of the additions turned on and feel at ease for  over 30 minutes. I would begin to feel a little nauseated not long after that, but after a few minutes of break time, I was able to leap about again without a problem. Motion sickness is certainly an issue if you are after a more authentic experience but most people should be okay if you make use of the comfort options at your disposal.

The premise of Windlands is one that sounds perfect for virtual reality. Vertical movement, if handled correctly, can feel fantastic, as it does in games such as Until Dawn: Rush of Blood. However, Psytec’s game is difficult to play. The clumsy traversal and poor checkpoint design makes you feel frustrated more often than thrilled, resulting in an experience that doesn’t live up to the promise of the idea.

If you’re looking for a vibrant world to explore in virtual reality then Windlands is certainly worth trying. However, if you are looking to feel like Spider-Man seamlessly swinging around a new landscape,  keep in mind that poor traversal mechanics and awkward movement will make that feel less authentic that you might have hoped.