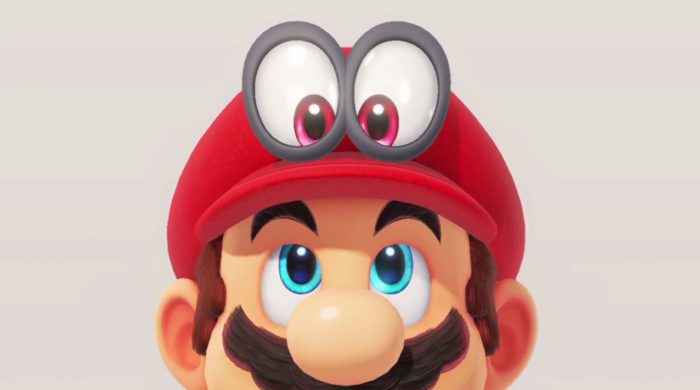 Super Mario Odyssey, announced at the Nintendo Switch event on Jan. 13, returned Mario to the 3D sandbox levels of Super Mario 64 and Super Mario Sunshine after the linear planet-hopping of the last two Super Mario Galaxy games. In the announcement trailer, he has a new airship and travels to dense forests, pastel-colored landscapes, and a city with human-proportioned characters. Despite the creepy flashbacks to Sonic Adventure and the 2006 Sonic the Hedgehog game, the human-filled city was nowhere near the most confusing factor.

One of Mario’s new abilities lets him throw his iconic red hat out like a boomerang across huge gaps and use as a springy platform. He places his cap on his head at the end of the trailer, and a pair googly eyes sprout out. The eyes look down at Mario, and Mario acknowledges its existence by looking up, even though he clearly cannot see past the hat brim separating the two. Regardless, the hat is alive.

The hat, which gets stomped on multiple times by Mario and receives a gigantic stomp from Bowser in the trailer, is alive. Does it feel pain? The hat does not have a mouth in which to opinate displeasure.

What’s worse, though, is that Mario is aware that the hat is alive, but still subjugates it to the bottom of his shoe. More a tool than a living being to Mario.

It looks like in Super Mario Odyssey, Mario will continue his tirade of abusing living things. His carelessness can be traced back to the early Super Mario games for the NES and Super Nintendo.

In the original Super Mario Bros., the only inanimate object to sport a face is the star which grants temporary invincibility. Mario is not alarmed that something that originates from space could be alive, and takes it for himself.

In Super Mario Bros. 2 (the US Doki Doki Panic version), turnips and other large vegetables have different faces. They are plucked out of the ground and hurled at enemies, causing both to fall off screen into the unknown abyss.

Super Mario Bros. 3 extends the consciousness to the mushrooms that make Mario grow larger or give him an extra life. Mushrooms have always played a key part in Mario’s adventures, but they have evolved with eyes that peek from underneath their caps. Clouds and large mounds of green land also sport eyes. The environment is constantly watching Mario. He does not care.

Mario’s madness reaches its culmination in Super Mario World, where the fire flower joins the living among the mushrooms and stars to be endlessly consumed by him. Normal yellow blocks and question mark boxes, when they have been spent, sport the same beady, black eyes as the clouds and bulbous land before them. Mario punches these seemingly sentient blocks, and chooses to ignore the silent judgment of the faces in the background.

His apparent psychosis extends to his long-time pal, Yoshi, who is found at the beginning of Super Mario World trapped in an egg by Bowser’s evildoing. Mario rescues him, and Yoshi gives him a ride by offering a higher jump and eating enemies.

In response to this friendship, Mario commands Yoshi to grab things with its long tongue by punching Yoshi in the back of the head. Mario can also sacrifice Yoshi to complete longer jumps. Yoshi falls into a pit while Mario lands safely on the other side, but whatever, there’s plenty more Yoshis where that came from.

Super Mario Odyssey is scheduled to release late 2017, so maybe we’ll get to see trailers of Mario bonding with his new hat friend. Mario can take his cap go-karting around New Donk City, share tacos in Day of the Dead land, and escape dangerous situations together. Though, according to Bowserfootsmashhat.gif above, Mario has already failed that last one.