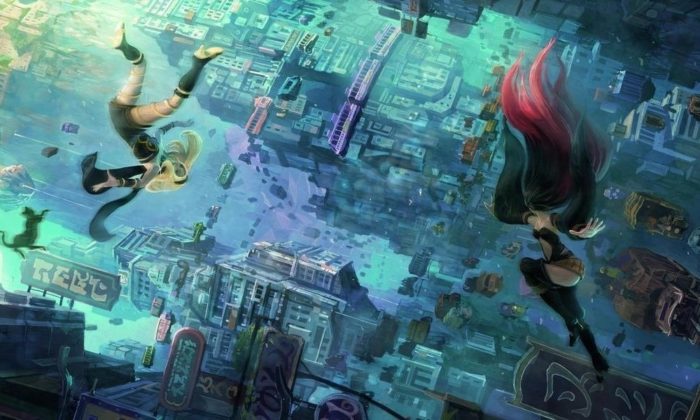 There are so many reasons to be appreciative of Gravity Rush 2, a game that PlayStation 4 fans should consider lucky to have, considering the original (remaster aside) was a niche game for a niche – and arguably at this point – failed handheld. In a world where so many games are formulaic, annual, bleak, gritty, and brown; Gravity Rush 2 is colorful, different, and cheerful, even at its darkest moments. It’s a game that takes on the personality of its main character: the sweetly charismatic and unbreakable Kat. And despite the game’s flaws (of which there are definitely some glaring ones), it’s hard to not fall in love with its charm.

Gravity Rush 2 picks up where the last game left off. Kat and others are pulled into a gravity storm that drops them into a foreign and depressing land where people are forced into hard labor just to survive under a police state. Kat has to reunite with old allies, and make new friends, in order to turn things around for the people in this land, and get back to her home.

Although the story gets a fresh start of sorts, putting Kat in a new area with new characters, it assumes that you have played the previous game and remember all of its details. It slowly gets more confusing as Kat’s past catches up to her and starts to intertwine with this new story. Even after playing the first game, I still struggled at times to suss out the finer details.

The game’s many side quests are critically important for understanding the full breadth of the story, and those that skip ahead (especially people that didn’t play the first game) are going to be armed with very little information for what’s going on beyond what is right in front of them. It doesn’t help that the pacing is a bit strange, as the plot will jerk you from relative calm, to epic climaxes that feel like they could be the game’s final mission, and back again multiple times throughout Gravity Rush 2.

Honestly though, the story is more of just a vehicle to get to know Kat better; Gravity Rush 2’s lovable main character Kat remains genuinely cheerful, optimistic, and kind no matter what she goes through, and never comes off as phony. You’re always rooting for her to be happy, even if you don’t know exactly what’s going on.

Gravity Rush 2’s main strength, though, is its unique superhero gameplay. Kat can alter gravity to fly through the air, create powerful physics-defying attack combinations, or stick herself underneath, or on the side of, large buildings to get a tactical advantage. Although Gravity Rush 2 isn’t explicitly a “superhero” game in the way that you might think of one in the era of the Marvel Universe dominating our media, make no mistake, Kat is a superhero with all the perks that come with it. It’s just as fun to fly around doing nothing productive and showing off your powers, as it is to progress the story and complete the game’s challenges.

The gameplay is very similar to the original game, with the biggest most noticeable change being the addition of two new combat styles in addition to Kat’s normal one.

Kat can go into Lunar style and be lighter than air. In this style she can launch herself off the ground and travel great distances without the need of gravity and also deliver quick, accurate, but less powerful attacks. The other style is Jupiter, which makes Kat slow and heavy, but grants her new destructive attacks that can obliterate groups of enemies in an instant.

The combination of the three styles gives Gravity Rush’s combat a much needed shot of variety, arguably the original’s biggest issue. Each style has their own spin on Kat’s normal and special attacks, without obsoleting the need for normal Kat, which has its own advantages as well.

Gravity Rush 2 is at its best when it puts Kat in a wide open area to have at her enemies any way the player wishes. It makes for thrilling moments such as ripping through quick, hard to catch Nevi in Lunar style, crashing down on a group of enemies with a massive shockwave-inducing Jupiter drop kick, and then switching back to normal Kat to stasis field debris (and even enemies) into the weak spot of a tougher baddie.

If the game stuck to that formula, it would have been a smooth experience throughout. However, Gravity Rush 2 over extended itself a bit trying to shake up the game’s mission structure. There are a good amount of missions that take place in tight, indoor areas, and/or require stealth. While I understand why in theory they were added (to add some variety), most of them are just frustrating.

Gravity Rush 2’s camera can be a bit tough to wrangle even in the most optimal of conditions. In the missions that take place in tight areas though, it can be just downright out of control. These sections have so little room for you to move around and oftentimes you’ll accidentally stick yourself onto a surface while in altered gravity, and unintentionally throw your whole camera orientation off. You’ll need to adjust, while possibly dodging enemy fire (that will send your camera for a loop again if you get hit), and hope that while trying to navigate out of this corner or whatever you got yourself into, that you don’t make the same mistake again.

The stealth sections are even more frustrating because not only do they also take place in tighter quarters, they usually ground Kat, forcing her to stay low in order to not get seen. Without intimate knowledge of all of the enemy patrols, you’re often forced into a game of trial of error, trying different approaches to see if you will get caught, which just isn’t fun.

Fortunately they aren’t all bad. Some of the stealth missions make use of Kat’s ability to walk up the sides of buildings undetected, which is a much more creative way to get by people than simply dodging normally on foot, or searching for the flight path that isn’t swamped by enemies. Thankfully the missions that are enjoyable and allow Kat to go all out with her abilities unrestricted, outweigh the ones that are poorly designed.

Gravity Rush 2 is also peppered with a lot of challenges and side quests that add a good deal of replay value. They reward Kat with precious gems to upgrade her combat abilities, as well as aesthetic collectibles such as new costumes or decorations for Kat’s cute tiny home. Specifically, side quests add a lot of detail to the story, and Kat’s relationship with various characters and the challenges give you an opportunity to put your gravity shifting skills to the test, and share your high scores with others online. Unchained Gravity Rush 2 gameplay is very fun, so any extra opportunities to let Kat do her thing are pluses.

There were times where Gravity Rush 2 drove me nuts, and inner me was telling me to write this review more negatively. But then I’d get past whatever was bothering me, Kat would do or say something endearing, and I’d be back to flying around having a blast, instantly getting over what annoyed me. Gravity Rush 2 powers through its noticeable flaws, and the overall product is an exclusive experience that shouldn’t be missed by any PlayStation 4 owner.