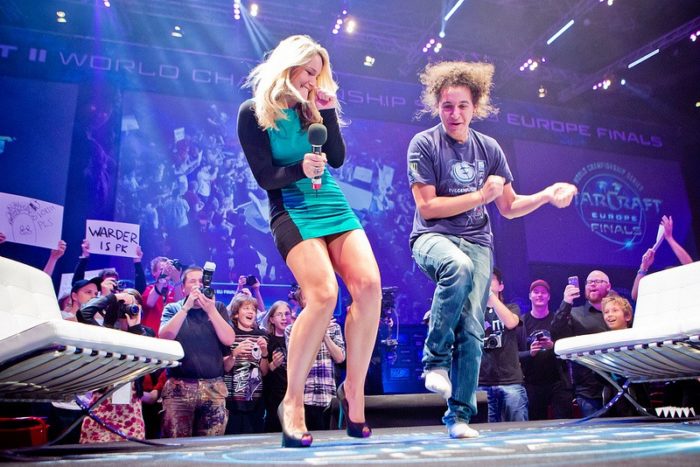 Rachel Quirico may not be an esports player anymore, but her presence in competitive gaming culture is still as prevalent as it’s ever been.

Players were first introduced to Quirico as a competitive Team Fortress 2 player for PMS Clan, going by the gamer tag of Seltzer. They became even more acquainted after her appearance on Syfy’s WCG Ultimate Gamer in 2010, a competition reality show that took its contestants through a variety of challenges to see who could reign supreme across multiple gaming genres and fun physical challenges.

About a week ago, a national audience saw the former Team Fortress 2 player hosting ELEAGUE’s CS:GO Season 2 finals on TBS, and now she is preparing to head to Las Vegas for MLG Vegas’s Overwatch invitational.

These days, Quirico, who is still known by her Twitch and social media followers as Seltzer, lends her presence to the gaming scene from behind a broadcaster’s desk or with a microphone in hand as she digs into the thoughts of some of today’s most prominent esports stars. It’s a position that seems only fitting for someone who has been a part of the competitive gaming scene long before major networks like TBS and ESPN recognized the value of the culture, and before players were escorted to the center of intricately designed stages or TV studios.

At one point, esports operated more like an underground subculture, tucked away in the back of hotel conference rooms and local arcades. With the help of personalities like Quirico, however, gaming is coming to a much larger stage, and the impact of that is something she doesn’t take lightly.

“I’ve always been finding things that I think really speak to me and I’ve always had different taste,” Quirico told Twinfinite at ELEAGUE’s Season 2 CS:GO Championships in Atlanta. “Esports is one of those things that, you know, it was not a mainstream taste, but it spoke to me and it spoke to a lot of people that I love to spend my time with. I thought, ‘Wow, if I can put more energy into this, I can find more of these people and I can bring more of this joy to people who maybe don’t like football and don’t like mainstream entertainment, and don’t like competing in other ways.’ ”

The idea of bringing a rapidly growing community together in a major way means more to Quirico than just an economic boom for gaming. While that’s a major upside, she maintains that the true beauty of the scene comes from creating platforms of inclusivity and community for people who may not have found it otherwise.

“I’ve always found so much in video games in the way of personal achievements. It speaks to me that I’m successful and when I play a game I have fun and I can make friends,” Quirico said. “That’s just something that I want for everybody.”

Quirico explained that even during her childhood, esports and gaming culture were always an important part of her life, allowing her to connect with new friends and find a strong sense of community. That impact is something that resonates so deeply that the fun-loving host, with a gamer tag dedicated to her bubbly personality, became rather emotional as she discussed the implications of expanding the esports world.

“I hope that by participating in it and being visible in my participation in it and inviting lots of other people to be able to come and be visible with me, it’ll show more and more people that there’s space for them here,” Quirico continued. “There’s fun to be had here.”

Even with a bright smile still planted on her face, Quirico’s eyes began watering as she related the importance of visible role models for those who hope to find comfort and success in esports. The statement was punctuated by the sounds of loud cheering and playful taunting creeping out from the ELEAGUE studios, where Astralis and OpTic Gaming were nearing the end of their battle to become Season 2 champions.

Now that Season 2 has officially come to an end, Quirico is preparing to take her broadcasting talents to Vegas, where she will be interacting with the community behind a game that she believes is particularly important to esports today—Overwatch. Blizzard’s massively successful title has been a huge aid in pushing esports to a mainstream stage, all while embracing the very things that Quirico believes makes gaming culture so important.

“Overwatch is a game that represents everything that I love about video games,” she said. “Diversity, accessibility — there’s a different way to play on every hero and there’s different skills to celebrate with every hero.”

And the accessibility factor doesn’t stop with just a diverse cast of characters. Overwatch is bringing esports to the public in a brand new way, as Blizzard will soon be launching an entire league dedicated to competitive Overwatch players. It’s yet another sign that the esports community Overwatch manages to create is a powerful platform for competitive gaming and its potential.

“The Overwatch community is full of so much hope and energy,” Quirico added. “Interacting with that community is my primary joy right now.”

Rachel “Seltzer” Quirico will get to embrace that joy this December as on-air talent for MLG Vegas, which will play host to both a North American Overwatch Invitational as well as the first open event of the Call of Duty World League.