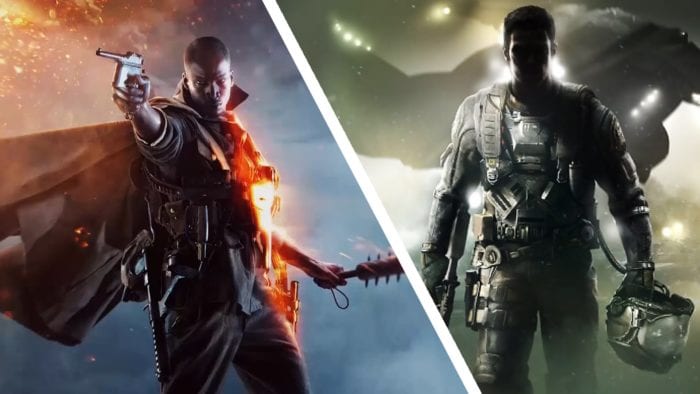 Earlier this year, Battlefield 1 and Call of Duty: Infinite Warfare both released their first trailers within a week of one another. Call of Duty’s was downvoted hundreds of thousands of times, while Battlefield received a very positive initial reaction. This set the stage for a war between fans of the opposing FPS series.

The two series have never been more different than they are this year. Battlefield 1 is delving into the past, crafting a game set in the First World War – a conflict seldom explored in video games. Call of Duty is doing the exact opposite, taking to the stars in a futuristic narrative based around a new, interstellar conflict.

I’ve only got my hands on Battlefield 1 so far, but the differences between the two titles are already clear. Battlefield is a much more grounded experience, literally. The story is comprised of several vignettes, each letting you explore a different side of the war. It does a fantastic job of illustrating the bloody nature of the conflict, and why it is such a pivotal event in the history of the world. Combat is fairly traditional, however. You sprint across fields and through trenches, picking off enemies and hopping behind the wheel of various devastating vehicles.

Despite essentially being more of the same with a new coat of paint, it’s still an incredibly well-made shooter. The stories are all interesting and give you unique challenges to overcome, many of them vehicle-based. Multiplayer is fluid and fun, letting you charge through beautifully crafted maps to capture points and kill legions of enemy soldiers. The guns and vehicles are all fun to use. Everything feels simultaneously familiar and new. And that’s where its greatest strengths lie.

We know Call of Duty is giving us a brand new campaign with celebrity appearances sprinkled throughout. We know it’ll take us to space, letting us gun down enemy troops on the ground, in a spacecraft, and in zero-G, desperately clinging to the sides of ruined space stations. It looks fun but at the end of the day, it’ll still be a Call of Duty campaign: fun while it lasts, but difficult to remember the morning after.

Multiplayer also looks pretty by the books. The base mechanics are ripped directly from Black Ops 3. So you’ll be running along walls, and choosing character loadouts that will define your base play style. For a series that has continuously sought to redefine itself year after year, it isn’t doing a great job. I found the strafing and double jumps of Infinite Warfare much more rewarding. They could really change the outcome of firefights and make Call of Duty feel distinctly different. Wall running is wasted in multiplayer because there isn’t ever any real reason to do it other than traversal, and even then if someone starts shooting at you there’s a pretty good chance you’ll just die and fall. The extra mobility is appreciated, but they are leaning too far into what I think are the worst additions to the series in recent years.

It’s because of this that Battlefield 1 will take the crown this year. It may be doing what it’s always done, but the gameplay systems are more refined than they’ve ever been, and the addition of what essentially amounts to a hero class – pickups that turn you into more versatile and powerful soldiers – give things a nice change of pace. The new vehicles are also incredibly fun to drive. They aren’t just simple reskins. Tanks are slower and bulkier, just as they were in the great war. Planes are nothing more than wooden frames and propellers, leaving the pilot open to the elements.

The campaign’s focus on the brutality of war is commendable, paying reverence to an incredibly lethal war. This reverence extends to multiplayer. Screams can be heard in the distance as you run to capture an objective amidst the ruins of burning buildings. There is a sense of atmosphere and tension that extends to every aspect of Battlefield’s gameplay. When the Battlefield theme swells up near the end of a multiplayer match I can’t help but start to feel pumped.

Call of Duty, on the other hand, looks poised to continue giving fans what it thinks they want. It speaks volumes about Infinite Warfare that fans are most excited about a remaster of a ten-year-old game. They couldn’t care less about Kit Harrington waging war on the Earth. Because no matter how much money they throw into a Call of Duty campaign, they always remain the video game equivalent of Michael Bay films: all style, no substance.

Multiplayer has always been COD’s bread and butter, but if they are going to simply take the systems of Black Ops 3 and continuously build on them, the series isn’t going to win any fans back.

The future of Battlefield is completely up in the air. Will they continue exploring the past or tackle a different era entirely? Whatever the case, it’s a pretty safe bet that Call of Duty will just keep crafting its own bland version of the future, replete with laser guns and plenty of robots to befriend.

Call of Duty needs to step up its game if it’s going to remain relevant. Battlefield is simply crafting tighter, more enjoyable experiences that offer its players more variety. Infinite Warfare may not be out yet but I’m calling it: Battlefield 1 is the winner of their year’s shooter war.