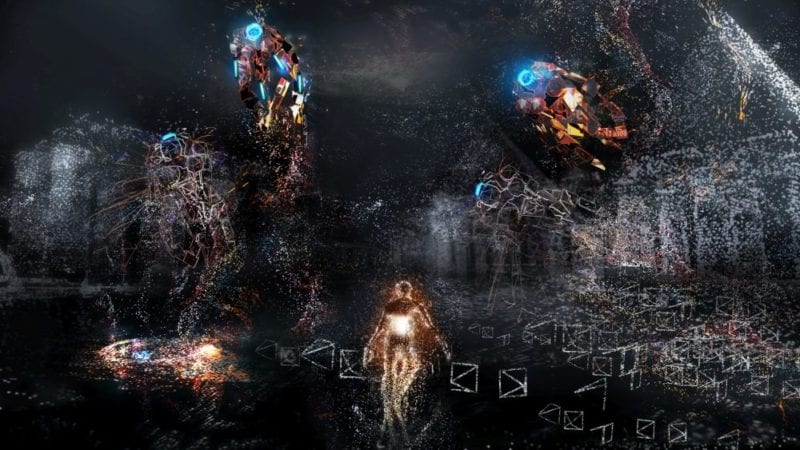 An updated version of the cult classic musical rhythm Rez was announced last year during the PlayStation Experience. However, Rez Infinite is more than just a simple port onto PS4 and VR, as the game actually comes packed with a brand new sixth level. Enhance Games, the studio working on Rez Infinite, released a trailer on their YouTube channel today, giving us our first look at the new area.

For anyone that doesn’t know Rez is a musical rail shooter game, that replaces the usual sound effects in a game with electronic music and beats. As players fly through the levels destroying enemies, they continuously develop the music of a level. The original game featured five levels, and the sixth level included with the PlayStation 4 version is titled “Area X.” The trailer gives us a look at some of the beautiful particle effects on display in Area X as the player character drifts through the world. The music promptly comes to a stop, as some kind of giant sea creature made out of speakers drifts by. The new level certainly looks like an experience in general, but you can only imagine what it might be like in VR. Take a look at the trailer down below.

Rez Infinite launches on October 13 for PlayStation 4. It should be noted that while the game can be played in VR, it isn’t necessary, and it can also be played with a regular Dualshock 4.

Are you planning on picking up Rez Infinite next month? Will your preferred method of play be with just a controller, or are you going to be giving the game a go in VR? Leave a comment down below and let us know.