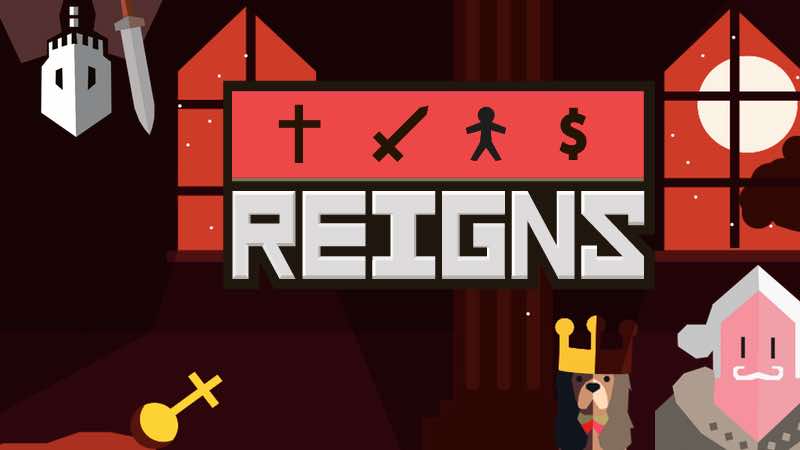 Reigns is the August game I almost missed. Sometime between the 18 trillion planets of No Man’s Sky and the gorgeous world of Abzu, a simple choose-your-own-adventure card game released on Steam and mobile. Boasting a $3 price tag, it promised simple gameplay, impactful choices, and “a sublime experience” for less than a Subway sandwich.

A text-based title in Tinder style, Reigns sets you in the shoes of a king, faced with a deck of cards posing unpredictable requests from your people. The army wants improved garrisons, the crops are poisoned, the archbishop thinks your (probably definitely evil) alchemist is a sinful pock. You’ll swipe right to entertain their pleas and left to ignore them, hoping to balance the four factions of your empire and avoid a grizzly usurpation.

The game is addictively playable, partially because it requires only a few main skills: a laptop or phone to play on, the ability to Tinder-swipe right and left, and the wisdom to impeccably rule a kingdom over many decades and into your ripe, kingly years.

Except, you’re gonna suck at that last one, and Reigns is glad you do. Every failed monarch becomes a permanent fixture on the timeline of the kingdom. Instead of respawning anew, you take up the next royal name and continue the legacy of your rule, carrying all the knowledge and mistakes of your past. Gleefully, Reigns acknowledges this, placing your seemingly infinite chances at life at the center of its slowly darkening plot. 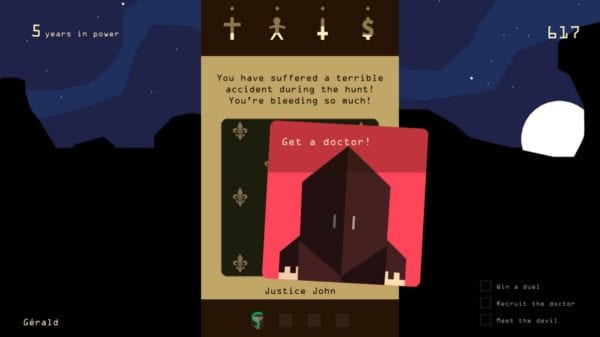 Teaming its mechanics with a monarch simulation premise really lies at the base of Reigns’ successes. These cards are the modern-day text adventure. Just as a the beast of a horror movie is scarier unseen, the timeless tropes of fantasy are sometimes more alive inside our heads – a trip down a dungeon hallway, an ominous prophecy, a dog that seems a little too intelligent. The simple graphics and text of these cards, the stillness as they await your choices, and what they leave unseen managed to feed my imagination rather than starve it.

Not every one of my swipes was a dramatic adventure move. In fact, most cards are a struggle to allocate the resources of your empire well enough to survive a few more years. With just the right frequency, though, mystery will find you. Much more frequently, death will find you. Failure is part of the Reigns formula, challenging you to unlock various unfortunate ends, and encouraging you to spend as little, or as much, time swiping through history as you want.

Reigns is a harken back to old adventures through a mode of modern day’s most addictive pastimes – simulations, swiping left and right, and short bursts of effort. It wants to be a fast-paced failure, it wants to be a reflective romp through royal carelessness, it wants to be the most replayable challenge of your day. And, as you may find, it succeeds.