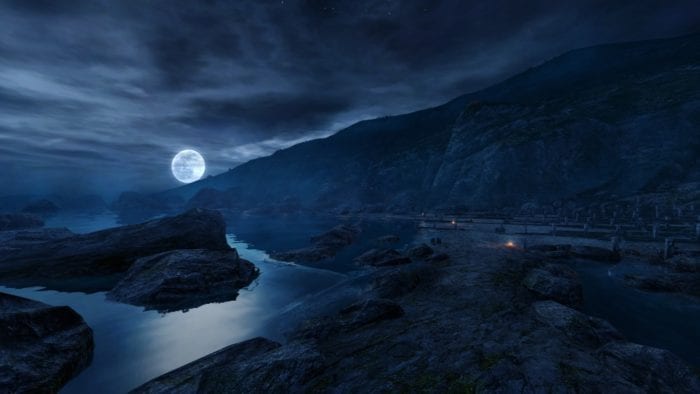 Dear Esther is a game that you shouldn’t read up on or have explained to you, but one you should experience for yourself completely blind. It may be an odd way to start a review, but this serves more as a warning that reading up on what to expect from Dear Esther will only take away from the beautiful and artistic experience that’s to be had in its short length. Going in completely unaware of what to expect, like many games in the narrative genre, is the best way to experience them. However, if you do want to know what you’re getting yourself in for, then keep on reading.

Dear Esther was originally a free-to-play mod for the Source game engine that released back in 2008. Following its success, developer The Chinese Room took it upon themselves to completely redevelop the title for a 2012 release. Now in 2016, the game has finally made its way to PS4 and Xbox One in the form of a port with a couple of new additions thrown in for good measure.

Telling a somewhat dark and touching tale of a man through a series of letters addressed to his wife in the form of prose, the player simply has to explore the island following paths carved into cliff edges, across sandy beaches, and into beautiful serene caves. Through advancing on this journey about the island, players will begin to uncover the troubled past of the man and his wife. It may sound simple, but that’s probably because it is. However, it’s the way these letters are delivered, the beauty of this Hebrides island that you’re trapped on, and the emotive soundtrack that make for one wonderful and heartfelt experience.

Each letter, voiced by Nigel Carrington, is so poetically poignant and said with such softness in places of calm, and power in moments of frustration that it’s hard to not believe that this isn’t a real person telling their true story. The further you go on your journey, the more engrossed you’ll find yourself in the world, and, if you look close enough, you may well see some rather strange things. It’s an atmospheric game that only gets better the more of the story you unfold, but that certainly does not mean you should rush through it. Yes, you could simply walk the path and just get the main plot points and the ending, but the way in which exploration is used to ‘unlock’ more parts of the narrative only helps to fuel your curiosity to check out that long stretch of beach that inevitably takes you far longer than you expected it to.

That comes largely down to the fact that Dear Esther unsurprisingly suffers from the same issue that its spiritual successor, Everybody’s Gone to the Rapture, suffered from last year: no sprint button. It’d be a crying shame to sprint through this world, snatching at the expertly-delivered words of Dan Pinchbeck’s script voiced by Carrington. But there are times where some players will more than likely opt to stick to the beaten path than explore simply because of how slow traversal can be. Even a ‘brisk walk’ button may have been preferred, but instead every button on the controller will simply have you zooming in your view.

While your view is largely beautiful thanks to the tranquil setting of the Hebrides island the whole game is set on, you probably won’t want to look too closely. Let’s be clear, this game hasn’t been visually remastered or enhanced for its Landmark Edition. Or at least if it has, it certainly doesn’t look radically different from its 2012 PC outing. Due to this, the fauna and flora covering the land of Dear Esther’s secluded island looks all a little too paper-like. Textures look a little lackluster, and the whole thing just feels quite outdated. It’s not a bad looking game by any means, but in comparison to my first time experiencing Dear Esther where I was completely consumed by the world, I found myself pulled out of the story thanks to its paper-thin feel.

That’s not to say you won’t have moments where the game shines beautifully, however. The caves of Dear Esther still remain one of my favorite environments I’ve ever explored in a video game thanks to the atmospheric lighting and excellent soundtrack from Jessica Curry. It’s at these times, among others, where Dear Esther truly shines: making the player feel completely lost and alone in a world so beautiful and peaceful that they don’t really care.

In terms of what’s new in the Landmark Edition, Xbox One and PS4 owners will receive a remastered audio, director’s commentary, a bunch of new accessibility options, menus and subtitles in different languages, and trophy/ achievement support. It’s certainly no star-studded list of new features, but if you’ve yet to play this game and enjoy the narrative experiences that usually remain on PC then it’s worth checking out.

Dear Esther: Landmark Edition is by no means going to be for everyone, but it’s a game I wouldn’t hesitate in telling people to try out even if they’re new to the narrative genre. If you’re looking for a game that could be considered art just as much as it could be a video game then this is certainly up your street. It’s combination of the English language, beautiful orchestral score from Curry, and picturesque environments create a perfectly moody and melancholy escape. It may look a little rough around the edges compared to your AAA blockbuster titles and its spiritual successor from last year, but for a $9.99 port, it’s not bad going.