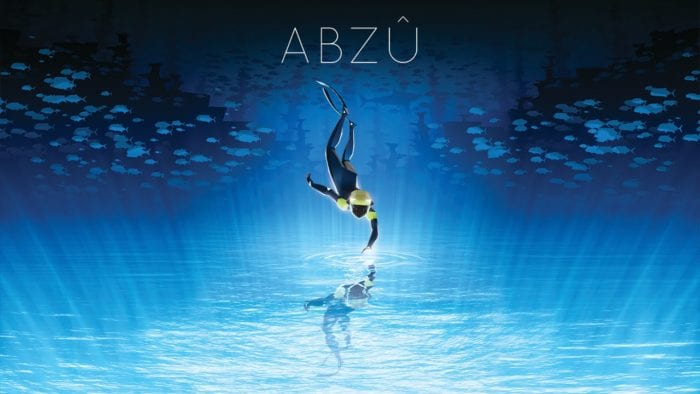 In 2012 the indie game Journey was released, wowing players with its gorgeous sand-strewn and evocative story and soundtrack. They say that imitation is the greatest form of flattery, but that may not always be true. Abzu takes a page directly out of Journey’s book, trying to emulate the experience players had, but this time with an underwater setting. It definitely has some gorgeous and memorable moments, but stumbles in a few places along the way.

Much like Journey, Abzu begins abrubtly, dropping players into the role of an enigmatic character, who’s seemingly on some kind of important quest or mission. The small robotic looking diver you play as wakes up in the middle of the ocean, there’s no explanation how or why, all you know is you need to swim forward. This ambiguous storytelling remains throughout the experience, with the game giving you bits and pieces of imagery and context here and there.

Like Journey, though, there are no spoken words in the game, only images. As you travel through a picturesque ocean environment absolutely packed with fish and underwater creatures, eventually you happen upon an area filled with darkness where everything looks dead. There’s a single pool of water at the bottom, that takes you to some kind of ethereal realm where your diver can use some kind of power inside themselves to regenerate the ocean life of the previous area. This turns out to be the main goal of Abzu – traveling to four of these areas and rejuvinating the plants and ocean life of each. The act of doing that is a beautiful thing, making the dark and desolated areas vibrant and filled with life.

Underwater sequences in games are tough to nail, regardless of an entire game being set underwater. Your diver doesn’t necessarily move slow, but for how large some of the areas in the game are, it’s slower than you’d like. Abzu’s controls are simple; the left stick controls your diver going up, down, and every other direction. R2 swims forward, while X gives you a speed boost, square lets you interact with objects, and circle is some kind of strange roll that I never really found a use for.

While Abzu does try to emulate Journey in both its look and feel, it just can’t stand up to it gameplay-wise. Journey had some smart puzzles and platforming weaved in between its mysterious story and world, but Abzu’s setting holds it back by restricting the player’s speed and options for movement.

The game is basically split into two different sections of gameplay – one where you’re free roaming around a small area, exploring and solving some very light puzzles; the second has you traveling down a jet stream at high speed in order to reach another open area. Unfortunately, most of Abzu’s gameplay boils down to one thing: swimming. There’s a few light, and I mean light, puzzle-solving elements like hitting switches or finding a small robot to open a  path for you. However, the main draw of Abzu really is peacefully floating through a gorgeous oceanscape.

There are plenty of beautiful areas, and a staggering amount of fish and ocean life, but this lack of gameplay leaves Abzu feeling a little hollow.  The jet stream sections of the game are by far the most enjoyable, with your diver speeding along through tunnels and corridors, with fish wriggling all around them. Without spoiling anything, later on in the game there are a few quick sections that involve your character walking on land. While these parts are few and far between, their controls feel awkward for how used to swimming you’ve become.

There is a huge emphasis on the different species of fish, and you have the ability to ride larger animals like whales or sharks. Certain points in the world even allow you to meditate, and focus on the wildlife, switching between them as they go about their daily routine. Collectible shells dot the world, while small pools can be activated by your diver, thrusting more ocean life into your current area. The wildlife of Abzu is quite possibly its strongest feature, alongside the gorgeous watercolor artstyle. Fish react to you as you move along, swimming alongside you, and each area is crammed with an almost unrealistic amount of creatures.

There’s no HUD to speak of either, only adding to the serene feeling of the game, while its art style reminded me of a kind of mixture between Journey and The Legend of Zelda: Skyward Sword. Eels and fish creep through the water, while plants bend and flow, giving a sort of movement to Abzu’s world. There’s one particular section where you join a group of feeding whales that was absolutely stunning to behold.

Combine these aspects with Austin Wintory’s orchestrated score, also the composer of Journey, and Abzu is a deeply calming experience. You’re never in any danger during the game, making it an experience that you can just soak in and not really worry about anything. Abzu only takes around 2-3 hours to complete however, so it likely isn’t an experience you’ll find yourself spending much time in.

Giant Squid Studios clearly wants Abzu to be as evocative of an experience as Journey, and while I enjoyed how calming it was, I ultimately found myself unsatisfied after my three-hour playthrough. The game’s world and setting is incredibly beautiful and atmospheric, but there just isn’t enough meat to the game to really sate your hunger. It’s certainly a breathtaking experience at moments, but one that’s hard to recommend to anyone looking for a substantial experience. As a first effort from the studio, hopefully they can take the impressive tech on display in Abzu and continue improving on it.