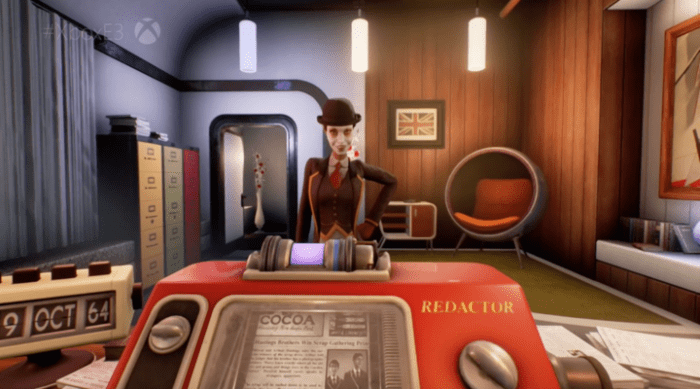 We Happy Few’s unique dystopian style and mechanics had fans across the world rabidly intrigued after its worldwide gameplay showing at Microsoft’s E3 2016 conference. During our time on the show floor, Twinfinite sat down with Compulsion Games’ COO, Sam Abbott, to talk about the game’s reception, its deep crafting elements, and the range of titles that inspired We Happy Few’s development.

In the demo, I noticed there was quite an emphasis on crafting and the crafting menu. I also noticed things like sneakers and mechanical components as crafting items. How deep does the crafting go in the game and how important is it?

Sam Abbott: It’s critical. You can’t… well there probably is some crazy person out there who will get through the game without crafting but for the most part, it’s essential. So the first thing that happens when you start the game is that we’ll train you to craft and you can’t go anywhere else in the game until you’ve crafted an item. That’s us saying, “Hey, you’ll wanna remember to do this,” kinda thing.

So would you say the game has a big emphasis on survival with the crafting element being so important?

SA: Yeah, I mean, what I would say is that survival is your core gameplay. So really it’s saying you need to get food and water, you need to craft better items to survive, and get you into places you otherwise might not be able to get into, but it’s not the overall goal. Survival is the means through which you achieve your goal, which is to escape.

Could you tell us a little bit about the extent of the procedurally-generated aspects of the game?

SA: Okay, so it’s a procedurally-generated world. You’ll always play as three characters, and right now we’ve only really spoken about one of them. But really, the idea behind the game’s lore is that it was supposed to be permadeath. The whole game was supposed to be permadeath, but this wasn’t really an option except for the hardcore. The idea was that once you get knocked out and fed Joy, you were thrown back into the system.

If you’ve read 1984, it’s very much the whole process where the guy gives up on life and just goes straight back into this broken, awful system. That’s pretty much the idea… you take joy again, they inject you, and you’re back in the system so you start again. You’ve got no memory of what the world looked like beforehand, so this is where it’s procedurally-regenerated.

The E3 gameplay trailer seems to have put you back on the radar in a huge way. You got a really positive reception when you launched your Kickstarter campaign. Has the feedback from the E3 gameplay been overwhelming?

SA: Yeah that’s the right word for it. We can’t really handle it all. We were trying to keep up with Twitter and after the first two minutes after the demo started it was just too much, so that’s great. I wish we could reply to everyone but it’s just not going to happen.

When I was checking out the gameplay trailer and the demo for We Happy Few, I got quite a Bioshock feel from the aesthetics of the game. Are there any games that you’ve taken inspiration from at all?

SA: Our inspirations are less about Bioshock and more about gameplay. It’s been a while since I thought about this, but we looked at aspects of certain games and how we wanted to do it. For example, we liked Dead Rising’s combat, we really liked some of the procedural systems in FTL, we liked the hardcore and permadeath devices in XCOM.

There are so many more, so every part of the game as you look at it references games that we think have done something really, really well. And we say okay, how do we take what they did and make it fit inside our world? Given, of course, that we’re normally one programmer and not 10 working on that particular feature. So Dead Rising, FTL, Don’t Starve and the survival genre generally for how you need to deal with it all. I suppose some of the team had Bioshock inspiration, but our Art Director has never played Bioshock, so the fact that the game has a similar aesthetic is coincidental.

We know for now it’s a timed-exclusive for Xbox. Do you have any time frame of when it might come to PlayStation?

Thanks for your time, we can’t wait to check out more of the We Happy Few.

Are you looking forward to We Happy Few when it arrives on Xbox One and PC in its preview next month? Anything you’re wondering about the game? Let us know in the comments below, and check out our hands-on E3 preview of the game here.