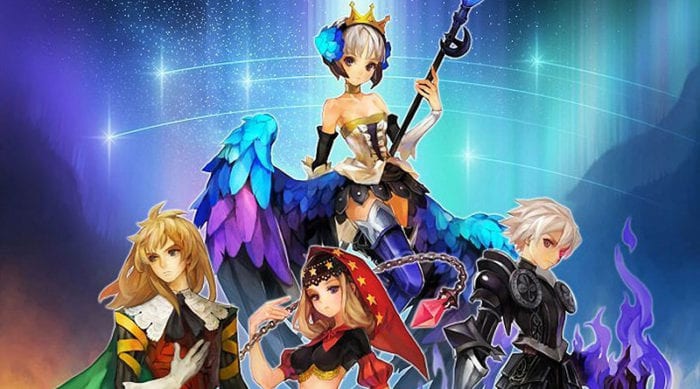 The original Odin Sphere was released on the PS2 back in 2008, and while it was a very beautiful game with cute sprites and artwork, the gameplay itself would feel a little tedious and repetitive at times. Not to mention, the UI and alchemy system weren’t exactly very player-friendly either. Odin Sphere Leifthrasir isn’t just a port of this PS2 game; it’s a remake that gives it the shine of modern Vanillaware titles we see today, such as Dragon’s Crown.

Sporting a new, sleeker UI, complete with tweaks and adjustments to key mechanics and a new shine on Kamitani’s gorgeous art, Odin Sphere Leifthrasir is the definitive version of the game.

The game starts you off as a little girl reading some dusty old books in the attic. Without knowing who or where exactly this girl is, the player is then plunged into the worlds of the epic novels she’s reading. In Odin Sphere Leifthrasir, you’ll experience the stories of five different characters, and watch how their journeys intertwine with each other before finally using the information you’ve learned from each of them to pit yourself against the final bosses.

Here’s the gist: there’s a major prophecy waiting to be fulfilled in the world of Erion, and it revolves around the usage of a powerful item called the Cauldron. The Demon Lord Odin wants it, the fairy queen Elfaria wants it, and the last princess of Valentine, Velvet, wants to stop either side from obtaining it as it could bring about Armageddon. You’ll play as characters from all sides of the war, including a few other neutral parties as well. All of these stories intersect at interesting moments, giving you varying viewpoints of the same events. 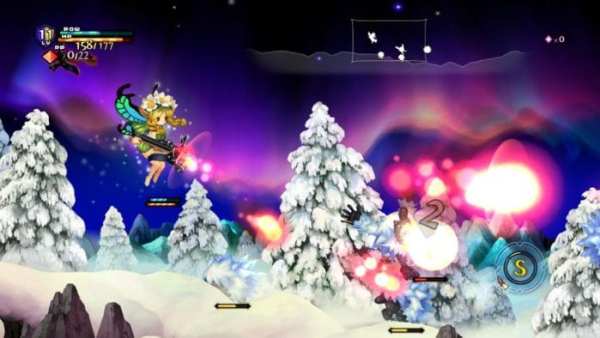 More importantly, all five characters you play as will get their own developed story arc, adding more depth to their individual motivations in this ongoing war. Mercedes, in particular, is a great character who matures over the course of her story. She starts off as an immature fairy princess, but steps up as a dependable queen by the end of her arc. It’s also cool to meet other characters as foes, and then later getting to play as them and see another side to their story that you couldn’t have known while playing as an earlier character. The five stories wrap up very neatly by the end of the game, and Odin Sphere Leifthrasir succeeds in telling a rather simple, yet touching tale about family and companionship.

Of course, the gameplay and combat also manage to feel consistently fresh in this 30-hour journey. As with Dragon’s Crown and Muramasa, you’ll get to chain insane combos, perform never-ending air juggles, and unleash beautiful super attacks with each of these characters. Each character is equipped with their own unique weapons too; Mercedes can shoot foes from afar with her crossbow, Oswald can go berserk with his sword and gain a crazy speed boost, and Gwendolyn is skilled with a spear and piercing attacks.

I’ve played the game on both the PS4 and PS Vita, and the visuals and frame rate remained consistent throughout on both systems. However, I did find that the graphics looked a lot more crisp on the Vita – likely due to the smaller screen – and while it does look stunning in its own right on a large TV screen while running on the PS4, it also looks a bit more washed out than on the portable. The controls are comfortable on either system, though if you’d like to take this game with you while you’re out, the Vita version is the way to go.

All five characters have a unique play style, and it’s fun to reach the end of one arc, and then move on to the next and learn a new skill set. One issue however is that you have to go through the same five to six dungeons with each character. Not only that, there are quite a few repeat bosses as well, though each story features a unique one. I guess that’s to be expected, considering all five stories happen more or less concurrently, and Odin Sphere’s story is all about presenting different sides to the same events. Still, fighting the same flamethrower gunship will get a little tiring after you’ve beaten it about four times already.

Odin Sphere Leifthrasir also features an alchemy system where you can mix materials and items you pick up along the way to create powerful potions to be used in battle. Your inventory space is often tight, but this encourages you to look through your bag consistently to figure out which items you can discard, and which ones you can mix to create more powerful assets. Your characters will also level up individually, and can discover new skills and abilities to be upgraded. Of course, some skills are locked away in the toughest depths of certain dungeons, and unlocking those will require more effort on the player’s part. 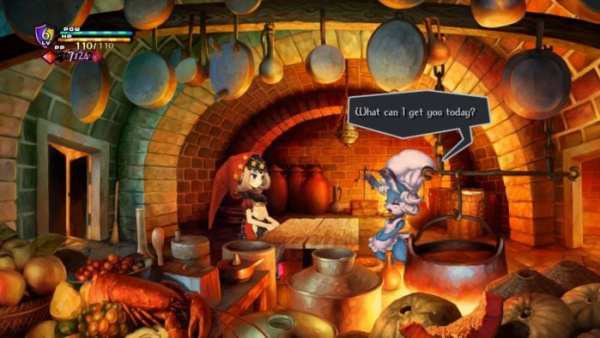 When you enter a rest area in a dungeon, you can even call up a chef and have him prepare delicious dishes with the food items you’ve gathered on your journey. These will give you experience points, and also increase your maximum HP. Collecting food and alchemy recipes from around the various dungeons soon becomes a bit of an obsession, as every little thing you can find in the game might give you an edge in the next fight. Plus, it’s always charming to watch a little Pooka rush up to you with a plate of seriously delicious looking herb-roasted shrimp, with the homely sounds of cooking and pan-frying playing in the background. Odin Sphere Leifthrasir’s story about war and family can get a little dark at times, but it sure knows how to lighten the mood with comforting artwork and cutesy food-serving animals.

If you’ve played the PS2 version and you’re feeling a little nostalgic, Odin Sphere Leifthrasir also gives you the option to play the game in Classic Mode. This basically allows you to play through the game with the original HUD and UI. You can also choose between Japanese and English voices, though it must be said that the English voice cast does a superb job of conveying the Shakespearean tones of the story and its themes.

The English cast features some big names including Yuri Lowenthal and Michelle Ruff. Persona 3 fans, or Metis and Aigis fans to be more specific, will also recognize Stephanie Sheh and Karen Strassman’s voices in this one. While Oswald and Gwendolyn’s actors might ham it up a little sometimes, it fits the mood of the game, and overall the voice work is strong and nothing ever feels particularly cringe-worthy.

Odin Sphere Leifthrasir is a true gem of an action RPG, and this HD remake certainly does nothing but improve upon the original release. The story has its fair share of emotional drama and plot twists, complete with a handful of light-hearted moments too. If you’re looking for excellent brawler gameplay with RPG elements and absolutely gorgeous artwork and uniquely designed bosses, you can’t go wrong with Leifthrasir.