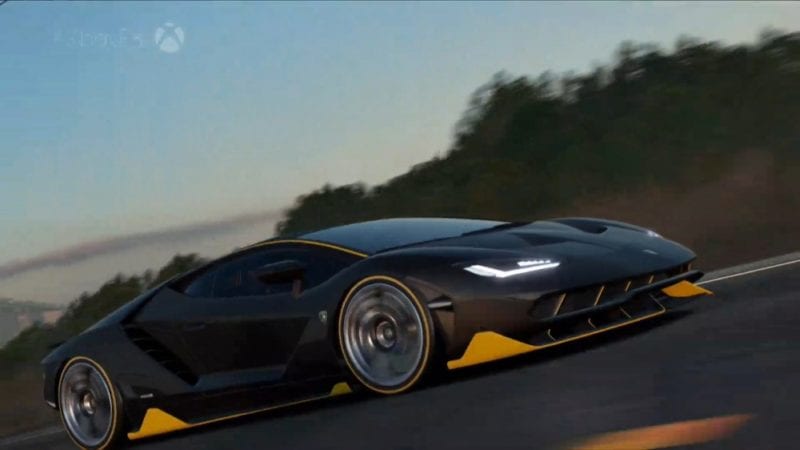 Yesterday saw the reveal of Forza Horizon 3, Turn10’s latest entry into its more arcade-styled racing franchise. The trailer featured a trio of different driving experiences on offer, showing off the different vehicle types you’ll be riding in and the varied environment of Australia.

At E3, we managed to get hands-on with the game, due to release in September, playing the same demo that featured in the conference. Starting off in the cover car for the game, the Lamborghini Centenario, was one of the most enjoyable open-road speeding experience (in a game) I’ve had in a long time. The deep roars and crackles of the engine, combined with the reflections of your surrounding environment in its paintwork, proved just how much detail has once again gone into the title. Kangaroos bounced across the road up ahead and the lush greenery of Australia flashed by as the Centenario reached incredible speeds and cornered sharply. Switching to an interior view of the car proved Turn10 has taken just as much pride in its attention to detail here as they have on the outside, with dials and interior fabrics looking like their real life counterparts.

Once the burning run on the roads was done, Forza Horizon 3 put me behind the wheel of a monster truck. While the Lamborghini stuck to the road and provided sharp and responsive turning to the driver, the huge monster truck charged over rough terrain and drifted around corners as it lost its grip. Instead of sticking to the roads, the monster truck took me off-road through grassy fields and across long shores of beach. Both the handling of the car and the terrain it was suited to was a stark contrast to the stylish supercar.

Finally, my time with the demo finished up with the race shown off during Microsoft’s press conference, as I took on the jeep being carried by a helicopter. Placed inside a dirt buggy of sorts, this third vehicle provided a combination of the previous two. Though not quite as fast as the Lamborghini, the buggy was able to storm its way through the thick Australian rainforest while also not having too much trouble with the rough terrain under the tires. As I raced along the ground, the helicopter wildly carried the jeep through gaps in the trees and took the roof off a house during a short stint on the road. As the race came to a close, the jeep was dropped just ahead of me as a mad dash to the finish line commenced.

Forza Horizon 3 feels like the rightful successor to the series. The Australian landscape provides a far more diverse world than the two previous locations in the Horizon lineup and looks set to give good reason to try out all of the different vehicles at your disposal. Though few other changes from its predecessors have been announced so far, these two fundamental mechanics alone will more than likely be enough to have fans excited for when the game releases in September.