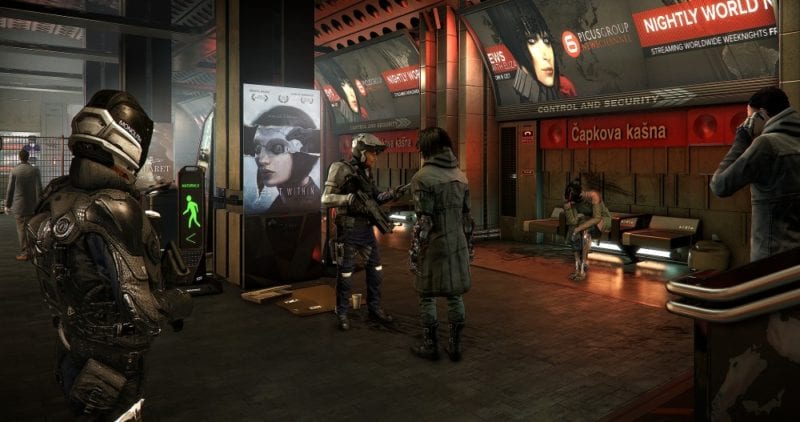 Deus Ex: Mankind Divided wants you to suffer as an outsider, to feel everyone’s eyes shift to you as you walk through streets and know you’re facing an uphill battle you don’t deserve.  A palpable prejudice pushes Eidos Montreal’s action-RPG series far further than any of its mechanics, placing a new weight on every decision and even more, every moment spent in protagonist Adam Jensen’s shoes. Not to say the mechanics aren’t crisp and appropriately reminiscent of Human Revolution, however, and we really ought to talk about those, seeing as they provided 80% of my hands-on E3 demo.

There’s something undoubtedly sharp about Deus Ex: Mankind Divided and the way it wants me to move through its world with precision. I snap from cover to cover, silently close distances, stun enemies in silence – mostly because if I don’t, I’ll be shoving my way through combat as gracefully as Mr. Jensen could swim through peanut butter. Aggression is always an option, but you’ll be punished for employing it without strategy.

Hostile environments – a ruined hotel turned arms deal location, in my case – leave little room for error, making every empty ammo cartridge, position blunder, and less than ideal gun a problematic disposition. Getting spotted or surrounded by a group of goons while unprepared is a death sentence, one that will send you sprinting towards the nearest ventilation duct of shame. A mistimed step can leave you tending to close quarters combat with little but a cooldown-dependent takedown and that short range weapon I hope you picked up before this. I didn’t. Off to the vent with me.

“You have no excuse,” the game silently tells me with its sprawling architecture, full of crawl holes and beams that offer plenty of tactical options. The demo mission also let me choose a weapon either nonlethal or lethal, long or short range. There would be a number of augmentations to customize Adam with as well, though for my playthrough I was only afforded a simple few.

Augmentations are key as ever, especially with footstep silencing, AoE bombs, and outright invisibility in the arsenal. A quick go-to will always be your special X-ray vision, perfect for locating architectural weaknesses and enemies in the vicinity. But of course, these augmentations are the crux of Mankind Divided’s conflict.

Just prior to the game’s events, augmented citizens were hacked by an unknown force and made to kill in terrifying, widespread attacks. Just as the enhancements were attaining public normalcy, just in time to fuel the “stop playing god” protests. ‘Augs’ are feared, then herded, then slaughtered outright. People can’t see a cybernetic limb without growing cold with fear, disgust, anger, or a combination of the three. Pro-Aug activists speak up, a violent Aug rights group speaks louder, and Adam will meet these key players with no small dose of deception and consequence.

Most of my time with Deus Ex was spent on a lone mission, but what stuck with me most, what I contemplated as I painted another air duct with my blood, was a small moment in the opening scene. Heading for the drop zone in our helicopter, one of my own teammates asked if he needed to worry about me turning on them, half jesting to conceal a very present fear in his eyes. Adam brushed off the distrust in a second, but no doubt it’s moments like these that make Mankind Divided stand out.

In a hands-off session, I saw Adam and other augmented humans struggle with jeers and police checkpoints. Some figures of authority show less distrust than others. Most require ridiculous levels of documentation, some demand bribes at the end of a barrel. Adam can choose whether or not to ease the struggle of those less gifted than he, and yes, these choices will affect the evolution of the world, but they’ll also dictate how the player chooses to interact with prejudice.

Though my time with Deus Ex: Mankind Divided was limited to two missions, one hands-off and the other hands-on, the social climate and my character’s role within it were most fascinating. Should this tension rear its head with the same effect come the full release, we’ll have a worthy new Deus Ex calamity to explore.