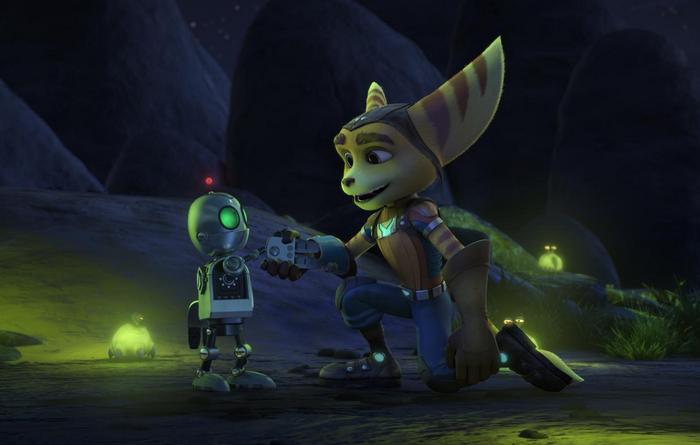 Reboots are a tricky business in video games, rarely a territory that’s traversed in the medium. Why reboot a game that, if done correctly, can be revisited time and time again without growing tired of it? Further, Insomniac Games sets out to reboot a series that’s gotten a remaster just one generation ago. I’m glad to say that even with the skepticism stacked against it, Ratchet & Clank ushers in a reboot for the series that sets the precedent for all future attempts within the gaming industry. If you’re looking for the exact same story, get that out of your head now. This is a re-imagining you’ll enjoy even if you’ve already played the original.

It’s been 14 years since the Ratchet & Clank 1 on the PlayStation 2 took the platformer genre for a spin with its wacky gadgets and over the top action. There’s perhaps caution about whether this type of title could survive in this day and age of first-person crafting and high-octane kill cameras. That’s where this is most impressive; not once does the action feel slow. In fact, it is often overwhelming in all the best ways. Swarms of bugs will come at you from all sides and, as you take a look at your arsenal, you can choose the Pyrocinator to shower them all in a fiery blaze. Or maybe you’ll get five flying robots shooting you down from the sky and it’s time to use your Predator’s homing missiles. All the while, you’re strafing and flipping through the air and using a jetpack to avoid any number of threats. Simply put, there’s never a dull moment with this game.

That’s largely due to the amount of unique weapons you’ll collect to face all those baddies. Like to get up close and personal? You’ll be able to. Love to shoot from afar? You’ll be covered. Enjoy getting creative and weird with it? There are funky weapons to have some fun with, too. There’s something for every kind of player and thanks to both the weapon wheel and the quick select, it’s a breeze to switch up your play-style without slowing down any of the action. During one battle where I could not have been more outnumbered, I shot a ball that pulsates an area of effect damage, tossed a disco ball that makes everyone near it dance, and unleashed a gun that turns everything it hits into pixels. The amount of weapons and the fact that they can be effortlessly switched to on the fly make you feel like a total boss during any fight. And if you think you’ll just stick to one kind of weapon, the game adds an incentive to using each one as much as you can. There are individual levels that your weapons can climb through, unlocking a special variation once the maximum one is reached. 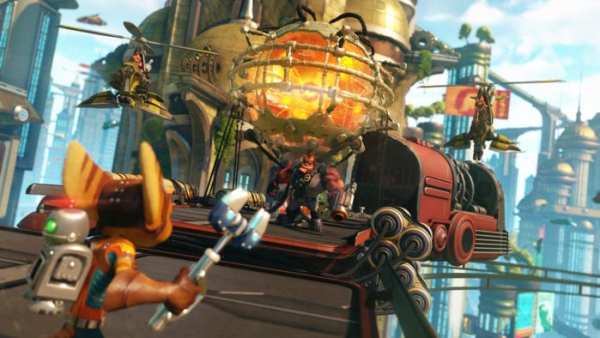 And if you think this game might be too easy for your tastes, you’ll definitely be surprised. Sure, the platforming aspects are simple and there are no brain buster puzzles to stump you. However, aliens around the galaxy are mean, man. They don’t mess around, even on normal. You’ll be swarmed and if you’re hiding under cover, you better believe they will circle around to get you. It’s refreshing that they didn’t hold back on difficulty to appeal to the new generation they’ll be attracting with this reboot.

That’s truly the best part of this new Ratchet & Clank; Being able to see a game that bridges the past with what people like now so well. The lovable characters are back, the goofy humor is there, and the action is a total blast. Not once did this just feel like a cash grab, taking advantage of the movie that’s releasing. It felt like a genuine retelling of the duo’s origin story and it has enough charm to put a smile on any player’s face. It’s not only a great game for younger players or fans of Ratchet & Clank, but also just a genuinely good choice for gamers looking for something that triggers nostalgia for a time when platformers reigned supreme. It even goes so far as to have an “Extras” menu section where you can unlock cheat codes, filters, different heads, and more as a nod to the days when these options were more rampant. It’s really a wonderful nostalgia trip wrapped up in a superb game.

It’s self-aware, it doesn’t coddle you, the graphics will leave you in awe, it has a ton of action, and it’s jam-packed with extra features and collectibles, to boot. If this review were just seven words long, it’d be simple to give the recommendation to anyone looking for a new game to play: Ratchet and Clank is just incredibly fun.