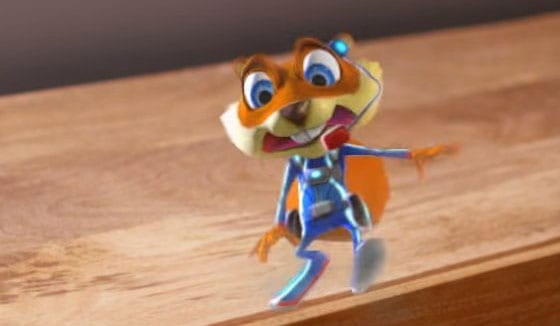 Earlier this week, Microsoft unveiled a new video for their Hololens technology. While the Hololens is something they’ve been talking about for a while, it’s what they used as demonstration that caught flack. This time around, Rare Unlimited’s famous squirrel, Conker, took the stage. And let’s just say that right now, the reception has been… not so hot.

To say that people are furious about the new Conker design and how the gaming icon has been treated is an understatement. Part of fan disappointment is this being his reemergence into the world after a long vacation. The little squirrel hasn’t had a game of his own come out since over a decade ago (let’s be honest, the Project Spark campaign does not count), and while he isn’t as big of an icon on the level of Mario, Nathan Drake, or the Master Chief, he still resonates with a lot of people. When people say they want a Conker game, they want one that reminds them of the good times of Bad Fur Day, not something that’s just thrown onto some admittedly cool looking tech. There’s none of the cartoonishly fun violence or crude toilet humor that gave the series its personality back in the day. Could you imagine a Hololens game with Young Conker where he’s fighting a giant turd? This kid doesn’t even look like he’d fight the toilet paper that clings to the bottom of his shoe.

That video is just straight up hard to watch, not just because of the freaky design (it looks like something from Crazy Frog or that Food Fight movie), but the comments make it hard to stomach. They’re very uh, spirited, to say the least, but the calls for Microsoft to put the little bastard out of his misery do warrant a discussion.

Gaming as an industry and culture is obsessed with legacy. While not as cavalier about it as TV or as freakishly devoted as comics, the history of this medium is always something that gets brought up in both positive and negative ways. There are few franchises that have stuck around on a consistent basis for decades, most of them courtesy of Nintendo, while more recent affairs have fans either wanting them to just be put out of their misery or be like how they were when they first started out. Think about how many times you’ve heard someone wanting Sega to quit making Sonic entirely.

It’s rare for a game franchise to end on its own terms without any outside influences. The only one that seems to have stuck that rule is Insomniac’s Resistance series, which concluded definitively in 2011. Any others have either gone the way of the dodos because the sales just weren’t there (the Devil May Cry or Prince of Persia reboots), or the studio just plain shut down (Star Wars: The Force Unleashed). There are franchises that take breaks to go back to the drawing board, as we’ve seen with Wolfenstein and Assassin’s Creed. Money is too much of an influence for a lot of publishers, who are content to just keep drilling the same thing until they stop striking gold.

There’s nothing wrong with that in a practical sense; if something’s making money, then any logical person would continue to make that thing to continue making money. But like an office job, the novelty quickly loses its magic, and you need a break. So it goes with games; returning franchises are all well and good, but some of these could definitely stand to just maybe end once and for all. Otherwise what we end up with are series that have fallen from grace, as is the case with Conker, Spyro, and more infamously, Sonic. Just look at how they’ve been treated over the past few years: Sonic fans go through a cycle of abuse, Spyro is basically a side character in the franchise he started, and Crash is nonexistent. Sure, there’s appealing to a new demographic, but for older fans who’ve been with these guys since the beginning, pulling an Old Yeller is a better solution than turning them into something they’re not.

Franchises are going to be around for a long time, there’s no doubt about that. All the same, there are some that don’t really need to be around anymore. Even if they turn a profit, what’s the point if the name associated with it is spoken with scorn or nostalgia for how things used to be instead of how they are now? Take a page from what Naughty Dog is seemingly doing with the Uncharted series and give a proper send off. That may not apply to every gaming series, but it applies to a good number of them, and if there’s one thing this industry could learn from time to time, it’s that you don’t need to trot out a dying musician just to see if they can still play the guitar.