Before even getting into a formal evaluation of Nitroplus Blasterz – Heroines Infinite Duel, let us explain what it is. The title is a bit of a mouthful, but you can get the gist that there is some fighting to be had within its confines. Nitroplus Blasterz takes the heroines from other Nitroplus games as well as anime/manga that Nitroplus has been involved with and throws them all into one fighting game.

Characters from Demonbane Phantom: Phantom of Inferno, Psycho-Pass, School-Live!, and more make an appearance as one of the 30+ characters. Don’t let that large number excite you, though. Out of the 30+ characters, only 14 are playable (with two having to be unlocked). Instead of delivering an expansive roster with tons of different fighters who vary slightly, Nitroplus Blasterz has a much smaller one with very unique heroines. It’s one of Nitroplus Blasterz’s main strengths, if not its greatest. 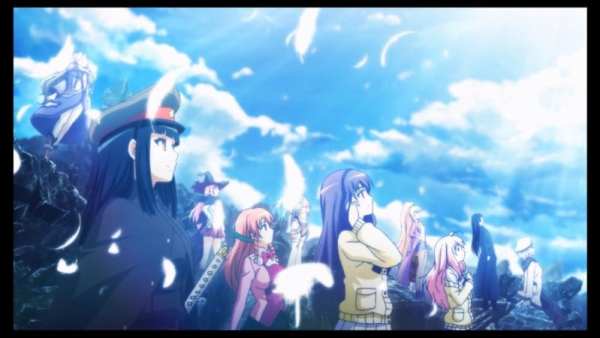 Each of the combatants feels completely different from the others, and this provides plenty of incentive to give them all a try. Whether you’re firing pistols as a trained assassin or wielding futuristic weapons a high-tech swordswoman, you’ll have a brand new experience each time. It’s amazing that the developers managed to create such a diverse roster, and quite impressive. But, that’s where all the greatness stops.

Nitroplus Blasterz roster is great, but the game doesn’t do much else set itself apart from the plethora of fighters out there. The visuals resemble those in a classic fighter, like the old King of Fighters or Street Fighter 2. They get the job done, but don’t do the animes, mangas, or other games justice. It’s an easy way to unify all the different properties with a single art style, but it waters down the experience.

Gameplay is fast, but not very responsive. When you do manage to pull of some of the bigger attacks, it’s a thrilling experience. Pulling off Infinite Blasts and rushes keeps the action engaging, and then you have the support attacks, which can extend your combos quite a bit. Unfortunately, the execution of attacks don’t work as well as they look. The controls don’t always want to pull off those cool attacks; movement remains incredibly stiff, so it’s difficult to find the same flow you’ll see the AI pull off with ease.

Then there’s the story. It is a simple one whose sole purpose is to give you a reason to fight through the gauntlet of opponents. We won’t spoil it for you, but suffice it to say that it is the most inconsequential element of the Nitroplus Blasterz. 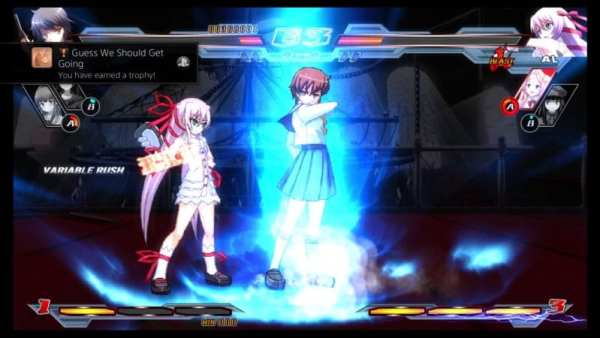 Nitroplus Blasterz – Heroines Infinite Duel plays it too safe, to the point of taking the game’s potential and squandering it. The roster is top notch, with all of the heroines being unique and fun to watch tear opponents apart. Ultimately, the less than stellar controls, lackluster visuals, and forgettable story make for a game that fails to impress. It’s a shame, because the roster alone is a strong foundation. If only the rest of the game received the same attention.