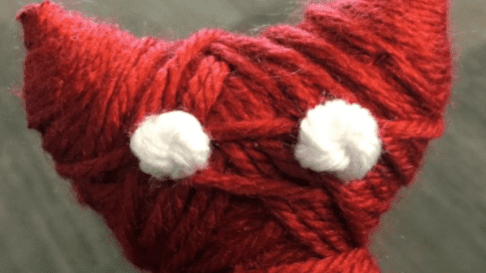 That’s right, going all in right off the bat with this one. He’s fooled you all with his incredibly charming creator, when in reality, he is actually a manifestation of the Devil, aka El Diablo.

Oh, what, you thought he just happened to be a cute humanoid ball of red yarn with horns? What did you think those were? Ears? They can stab you. And his eyes have absolutely no pupils. You know who else has all-white eyes without pupils?

The powerful demon in Supernatural, for one. That’s just one. That’s only one of the ones.

How can Yarny see a goddamn obstacle and how to climb it with no pupils? Because he is clairvoyant. He is the beginning and the end. He’s seen everything with his mind’s eye. He doesn’t even really need to climb anything or finish any puzzle, he is omnipresent as it is. He’s already friggin’ there.

I know what you’re thinking. “But Yami, Martin Sahlin was so sweet and nervous up on stage as held Yarny for the crowd at the EA press conference. How could this game be anything other than beautiful?”

Editor’s Note: Yami, I think it’s uncalled for to say a game developer is a “Satanic Apostle.” I’m not even entirely sure there are Apostles in Satanism.

That’s right, look, I was fooled too. Our Managing Editor, Ed McGlone, instantly texted me during the conference asking me how in love with Martin’s cute demeanor I was. I replied that he was perfect and a kind soul and all humans should want to be like him.

We all make mistakes, though.

Clearly, he was held up to show the crowd their new dark lord. So that Yarny could see the people he would soon rule over. It was some Simba and Mufasa shit. Everything the light touches is Yarny’s kingdom.

Yeah, Yarny, I bet it’s cold out of hell.

This little demon had us all convinced. The red string of fate, sure. Connecting loved ones together, uh huh. He’s not trying to bring a family together. He’s going through a hit list and they are his victims.

Editor’s Note: You’re straight up implying that Yarny is a murderer now. First he was a demon, now he’s an assassin?

Sure, Yarny is just one yarn manifestation of the devil. That can’t do much harm, right? Just grab some lighter fluid or safety scissors and you’re set. Wrong. Why would the developers have released a tutorial on making your own Yarny?

Obviously, to grow the demon army stronger and stronger. Coldwood Interactive is already well-underway on a mastermind plan to take over human souls with an army of demon Yarnys.

Editor’s Note: We cannot run an article where we claim that an independent game studio is a secret organization bent on raising hell and conjuring the Devil.

Editor’s Note: Devil and Diablo are the same thing.

Look, the evidence is here.

Editor’s Note: No it’s not.

Yarny has absolutely no regard for sentient life besides humans. That’s right. Yarny might be on a quest to unite a family, but he only cares because they’re humans. That’s why he’s going through all the trouble. He wouldn’t give a damn if it was a pack of dogs. Why? Because they have no souls. Everyone knows that. All Dogs Go to Heaven is bullshit. Above, you can see him trapping a crab in a cage for his benefit. He jumps off and prances away without a care that he just locked and damned an innocent crab for the rest of its pathetic life so he could solve a puzzle.

Editor’s Note: We’re going to have to talk about these repressed All Dogs Go to Heaven feelings later.

Look at the below image and try not to shit yourself at the horrifying imagery.

He is dangling by his neck, still alive. He is literally a game of hangman right now and we’re supposed to believe he’s not an evil creature. What kind of thing is impervious to death?

And let’s take a closer look at this picture, shall we?

You know who else has a tail, don’t you?

This is what Yarny looks like when he’s used up all his yarn, by the way. Like a messed up cadaver roaming our living nightmares. The body may be weak and frail, but those ever-vigilant eyeballs remain all-seeing.

He knows your sins.

Editor’s Note: This article needs to go back to the drawing board. Not only do you sound like you’ve actually lost your mind but you’ve managed to scare the crap out of me so hard that I left my apartment and am writing in a well-lit, bustling coffee shop just so I wouldn’t be alone while reading this.

Yarny isn’t just evil, ladies and gentlemen. Nay, he is the manifestation of El Diablo himself. He is here for all of us and, frankly, there is no escape. None of you believed me when I said this but now Unravel has released and we are all doomed.