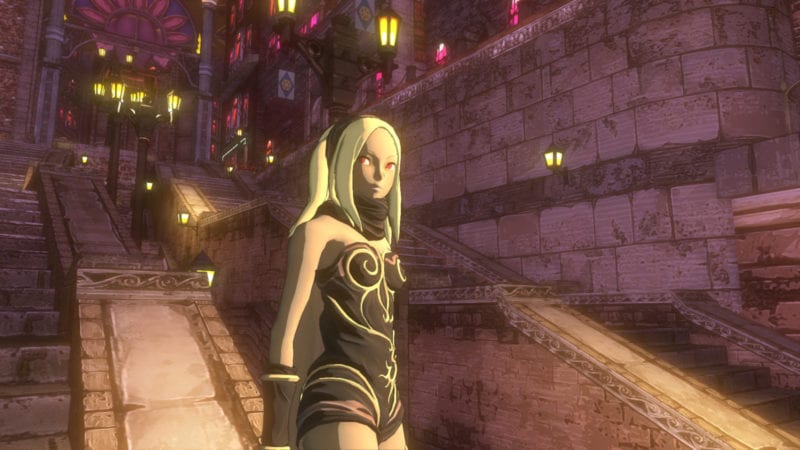 Gravity Rush is a gem of a game that was just being held back by the PS Vita. There, I said it. But before we get into that good stuff, what exactly is Gravity Rush?

Gravity Rush has us follow the story of Kat, a young amnesiac girl who one day finds herself in the beautiful, cel-shaded town of Hekseville. With no memory of who she is or how she got there, her only companion is this spiffy-looking space cat that grants her the power to shift gravity and fly freely through the air. As Kat, you’ll spend your time wandering about town, searching for clues about our snarky protagonist, while occasionally ogling at boys and collecting purple gems to upgrade her skills and stats.

I revisited the game on the Vita for a while before jumping into Gravity Rush Remastered on the PS4. While the game certainly looked gorgeous on the OLED screen, I recalled my number one gripe with the title when I first played it: the controls. The analog sticks were small, causing movement to feel sticky, and players had to utilize the touchscreen to do the most basic moves like dodging and sliding.

On the DualShock 4, however, the controls feel much more comfortable and intuitive. You can still swipe the touchpad to dodge, but you can also tap a button to perform that same move. With the DualShock 4, it’s much easier to control Kat while she’s in the air, making Gravity Rush Remastered a delight to play, even as it was my second time journeying through the various districts of Hekseville.

Gravity Rush Remastered deserves praise because it never causes you to feel nauseous or disoriented, despite encouraging you to spend the bulk of your time traversing the underbelly of the city or running along the sides of the town’s aging buildings. The camera snaps itself in place each time you shift gravity so you never have to worry about inversed controls when you’re upside-down. Every so often, you’ll find yourself wondering which way’s down, and all you’ll have to do is look at Kat’s scarf. Kat can defy gravity, but her scarf will always point in the direction of the ground.

The game looks absolutely stunning on the PS4 too. Bluepoint games, well known at this point for delivering quality ports of older games, does an unsurprisingly great job with Gravity Rush Remastered. The improved frame rate and visuals make the game both a joy to play and to look at.

Of course, this ported version of Gravity Rush doesn’t fix the game’s original flaws. The combat is simplistic enough, and you could get by the entire campaign using the Gravity Kick, one of Kat’s special abilities that you acquire very early on in the game. The game’s main enemies, known as the Nevi, are these dark blob-like things which look cool in the first hour or so, but quickly get boring as soon as you realize these enemies don’t have a lot of variety. But hey, at least it’s much less of a pain trying to Gravity Kick the Nevi’s weak points on the PS4 than on the Vita.

This game hurts my eyes sometimes. But damn is it pretty.

The game does feature some memorable and innovative boss fights, but these encounters are simply too few and far between. Suffice to say that if you’re looking to buy Gravity Rush Remastered for the combat, you’re just not going to get a lot out of it. But it is worth noting that the combat was never intended to be the game’s focus anyway. After all, you won’t even encounter enemies when you’re not doing any missions.

There’s also the issue of the story. While the art design and writing remain consistently charming throughout the campaign, the story does start to falter when you enter the final act, resulting in an ending that may feel a tad unsatisfying. Thankfully, we already know that Gravity Rush 2 is in the works, so it’s likely that all of our unanswered plot questions will be resolved in the sequel, along with any gameplay issues from the first entry. Still, as a standalone experience, Gravity Rush Remastered may disappoint players by leaving some loose ends and unexplained story threads.

Nevertheless, these issues certainly won’t stop you from having a hell of a good time in Hekseville. Packed in with Gravity Rush Remastered are the story DLCs that were released on the Vita, including the Maid and Spy side missions. The DLCs themselves don’t really affect the overall story, but they do add some character and life to the town of Hekseville.

Kat herself is such an interesting and captivating protagonist too. Being an amnesiac, she shares the player’s confusion as she discovers her powers and the townspeople she’s apparently supposed to help. She displays a strong sense of pride after rescuing a boy from the clutches of the evil Nevi, and feels indignant when she doesn’t receive the gratitude she believes she deserves.

She knows that saving the town from evil forces is important, but she just wants to talk about boys, furnish her little hideout with pretty stuff she finds around town, and just fly through the air without a care for the world. She certainly doesn’t have any misguided delusions of grandeur or heroism, even though she actively assumes the role of the town’s heroine by the end of the game. Kat’s relatable, she’s likeable – and rather ironically, she’s grounded.

Despite the issues I have with the story and combat, there’s still something special about Gravity Rush. And it’s a damn shame that more people haven’t gotten the chance to experience this game before now, simply because it was a handheld exclusive. I’ll love my Vita forever, but Gravity Rush Remastered finally reaches its true potential on the PS4, and things for this special gem can only go upwards from here.