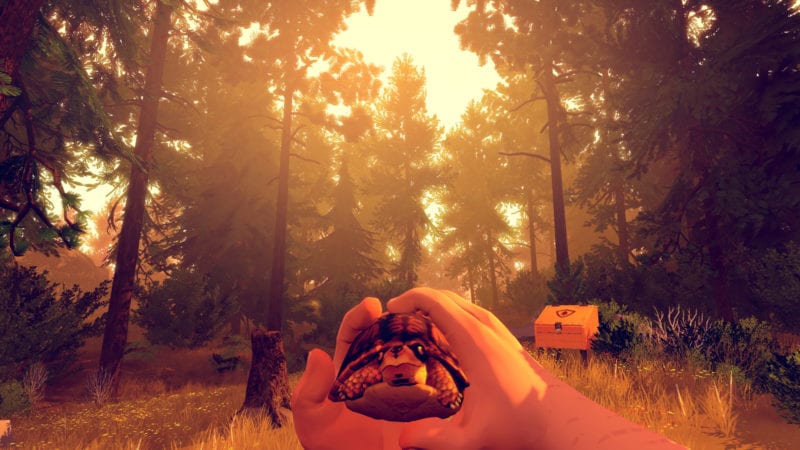 Firewatch dropped for the PS4 and PC via Steam earlier this week, and it’s become quite the hot topic because of its intriguing story and mystery. However, the game also contains a few Easter Eggs and nods to other popular games that have released in recent years. Listed below are the ones we’ve found so far.

In cache box 307, you’ll find a copy of the book ‘The Accidental Savior’, written by Terrence Greenbriar. Fans of Gone Home will recognize this novel written by the father of Kaitlin and Sam Greenbriar.

At the old scout’s camp, check out the old shelters to find this neat hunter’s mark etched into a plank of wood. The hunter’s mark is a very symbolic piece of imagery in Bloodborne, the PS4 exclusive title by From Software released just last year.

If you look in cache box 303, you’ll find a sweatshirt from the University of Eastern Colorado. This is the same university that Joel and Ellie went to in search of the Fireflies in The Last of Us. Go, Big Horns!

Early on in the game, you can examine Henry’s watchtower and check out the various books he’s brought along with him to Two Forks. One of these books is titled ‘The Patriots’, written by Donald Anderson. It’s a clear reference to the Metal Gear Solid series as the Patriots is a secret organization that controls information in the MGS universe. Donald Anderson also happens to be the name of the DARPA chief in Metal Gear Solid.

Have you found any other cool Easter Eggs in Firewatch? Let us know in the comments down below.