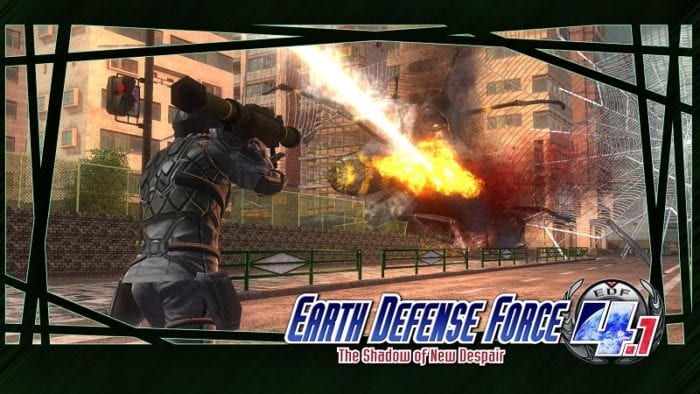 Earth Defense Force 4.1: The Shadow of New Despair on PlayStation 4

Earth Defense Force 4.1: The Shadow of New Despair is an interesting game. For starters there’s that mouthful of a title that makes you think this is an all new game, but that’s not he case. You see, Earth Defense Force 4.1 is actually a sort of remaster of last year’s Earth Defense Force 2025 but it throws in some extra content, as well as a leap to 1080p/60fps to make the jump to the PS4 worthwhile. The question is, should the jump have been made to begin with?

If you’ve never played an Earth Defense Force game, you should know that they are a bit odd. You play as an elite soldier whose job is to protect the world from alien invasions. The thing about these alien invasions is that they come in the form of bugs, large, realistic looking bugs. I mean seriously, they are easily the best looking aspect of the game.

While Earth Defense Force 4.1 runs at a stable frame-rate with crisp visuals, the actual look of the world is fairly plain. The combat areas are large, though, and have lots of destructible structures. Walls will collapse, bridges will crumble and trees will be torn from the ground as you blast your way through hundreds of large insects. It’s cool that the world reacts to the combat in such a way but that doesn’t change the fact that the game clearly wasn’t initially developed for the PS4.

The lacking visuals carry over to the character models, as well. There are four classes you can play as; Ranger, Wing Diver, Air Raider, and Fencer. Each has its own weapons, controls, and abilities out in battle. And with the exception of the Fencer (who looks like a walking tank) and the Wing Divers (the flying force), everything else looks very generic and forgettable.

The classes themselves are very unique, but unless you’re playing multiplayer there really isn’t much of a reason to opt for the much slower classes that completely lack any verticality. The standard soldier class has decent moving speed and can hold his own, but the extremely slow nature of the Fencer (we’re talking so slow that you may as well not move and just wait for the insects to come to you) makes it unwieldy.

The Wing Diver is by far the best class in the game, and it’s not necessarily due to power. It actually has the lowest armor in the game, and all classes have access to potent killing machines. The Wing Diver just happens to take full control of the environment and is the most fun to use. You fly around, reaching the tops of buildings, raining hell on ants, spiders, and whatever else the game decides to throw at you, all while looking (and feeling) like a complete badass.

It makes the imbalance between Earth Defense Force 4.1’s different classes extremely clear. If you do decide to play multiplayer, then it becomes much more reasonable to want to use the different characters. Strategizing your assault to perfectly time your reload times or to just set up cool looking explosions can be a bit fun, but you still can’t help but feel the disparity between the clearly fun Wing Diver and everything else.

The actual game itself isn’t all that remarkable unfortunately, even if you do play as the only class with the ability to fly at all times. At first, the act of mowing down hundreds of huge insects (at first it’s just ants, but eventually you’ll come across different types of spiders and more dangerous enemies) is incredibly fun. Watching as their appendages are blown off, or bringing a bridge down onto a huge swarm is satisfying. But, as time goes on, you’ll realize that’s all you do.

A mission starts, you go kill all of the enemies, some more appear elsewhere in stage, you kill those and that’s it, mission complete. The never ending barrage of cookie-cutter missions and the rotating backdrop of locations (there really aren’t that many different areas) wears down on the experience.

There is a story, one that has to deal with the evolution of all of the enemies since their last appearance seven years ago. The voice acting will have you quickly tuning that out, though. There’s also the fact that the game thinks that the best time to deal with narrative is when you’re surrounded by hundreds of screeching insects. When the other enemy types (which we won’t spoil for you) get introduced, it’s just weird because the story just wasn’t worth paying attention to.

Earth Defense Force 4.1 does throw new weapons and armor (which doesn’t change your appearance) at you for your efforts, but sticking around long enough to put any to good use is a daunting endeavor. There are just too many missed opportunities to justify sticking around for very long.

Earth Defense Force 4.1: The Shadow of New Despair has some good features. One amazing class, destructible environments, and tons of onscreen enemies sounds like the makings of something great. But the highly repetitive missions, dated graphics, forgettable story, and lack of anything worth sticking around for make the game a largely forgettable experience.