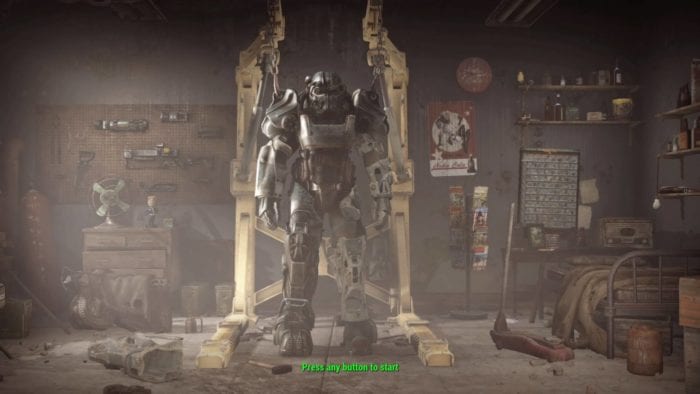 Fallout 4 hasn’t even been out a week yet and there are more and more glitches and exploits being discovered by the second. We recently saw how to quickly max out your SPECIAL stats and get unlimited caps, now it’s time for an infinite XP glitch.

The only prerequisites for this glitch are that you have joined the Brotherhood of Steel, and a high-damage sniper with a long-range scope on it. You can buy such a weapon from vendors in Diamond City or Bunker Hill if you’re not a fan of weapon modification.

Once you’ve got your weapon and joined the Brotherhood of Steel, complete a few of the missions until you’ve been welcomed up onto their airship base, Prydwen. If you’ve already done this, then simply travel to Prydwen and talk to Proctor Quinlan. You’ll have the option to help out on a patrol, accept it and this will activate the quest “Learning Curve.”

Once you’ve got “Learning Curve” set it as your active quest and head out onto the deck of the airship. At this point, move the game onto the easiest difficulty setting, as this will speed up the whole process. The quest will have you protecting a Brotherhood ally that you can spot from your position on the airship. Instead of protecting him, you’re going to crouch down and ensure you’re hidden. Aim your sights at the unsuspecting guy and give him between one to four of your best headshots. As long as you remained hidden and stayed still, the Brotherhood of Steel won’t attack you.

Once the deed is done, remain crouched and still until it flashes up and says you are hidden once again. Return to Proctor Quinlan for your healthy dose of XP. He will then give you the exact same quest again, allowing you to rinse and repeat the very same process for unlimited XP.

This quest takes about ninety seconds to complete and rewards you about 300 XP. This equates to some rather huge amounts of XP in ten minutes and some very fast leveling up indeed. Not bad for some cold-hearted betrayal.

Will you be taking advantage of this glitch? Have you used any of the other glitches in Fallout 4? Let us know in the comments below.