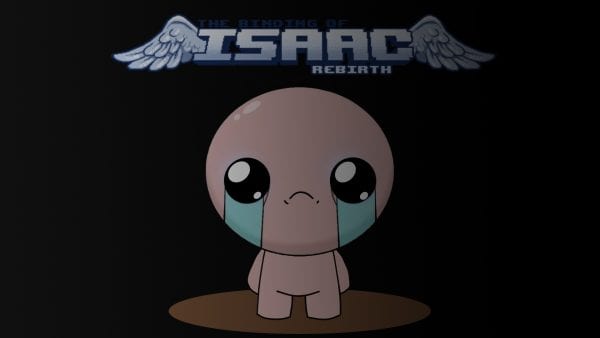 I’ve been playing through The Basement Collection recently and it contains several exclusive Q&As with Edmund McMillen about some of his older games.  First off, The Basement Collection is only $4 and it contains nine of McMillen’s earlier flash games.  Also included in the Collection are drawings and comics from McMillen’s younger life; it is as if he wants to be very open with his acknowledgment that his childhood was troubled.  There is a comic strip he wrote depicting unfeeling adults and very dark themes based on his childhood. And yet somehow, he manages to make it all comical…like his games.

McMillen inserts many deep themes in his work, but I’ve noticed one particularly overarching theme after viewing all of this new media: it tends to involve a person retracting into themselves when their home and social lives become too much for their view of reality to handle.  Now, let’s look at three games that are incredibly dissimilar, but that I still see as chronological in a bizarre, thematic way.  The Binding of Isaac endings have always been the most mysterious so I will work towards that one at the end.

Heavy spoilers follow, and I’ll try to mark them as best I can, but you have been warned….

Start with Aether – a game that McMillen says he feels stayed true to the meaning he meant for it.  The game begins with a poem about a boy who, for the sake of being brief, is overwhelmed with life.  He imagines a world where he rides a giant monster that can swing through clouds and through space to visit new planets.  It’s a blast to play and pretty short, so be sure check it out.  The game ends (**SPOILERS**) with returning to Earth and destroying it because it has become so small.  McMillen describes this as similar to when one creates their own elaborate world just to escape reality. It eventually cuts them off i.e. making Earth (reality) smaller and smaller until it is completely gone. (**End Spoilers**)

Let’s look at the other game McMillen claims to have delivered on its theme: Time Fcuk.  In this game, Steven (your character) is visibly depressed with life.  His future self arrives and urges him to “GET IN THE DAMN BOX”.  Once in the box, your future self consistently sends you morbid messages about how you two will never escape the box.  Each level is a puzzle with no apparent exit, but you can switch dimensions to reveal new paths. McMillen has described this box as the alternate, creative place one uses to escape reality, yet another return to this escapist theme.

Unlike Aether’s sad, underlying ending of being warped forever from reality, Time Fcuk has different endings that (**SPOILERS**) either allow to you give up and stay in the box forever, kill yourself, or reconcile with future Steven to finally set your future free.  McMillen describes the defining gameplay mechanic of switching dimensions to solve otherwise unseeable solutions as being able to escape the metaphorical box by seeing things from different perspectives; this, he says, he did in his own life.  McMillen has also said that there is a bigger connection between Time Fcuk and Isaac than one might believe.

So already there are two games that McMillen has revealed to contain exactly the theme of “the box” he wanted to assure in the final products. Aether describes a child already in the box, and Time Fcuk explores life thereafter extending indefinitely, but also touching on the possibility of escaping by expanding your viewpoint on life.  Now, many people tend to look for very specific symbolism in every piece of the Binding of Isaac (hereafter referred to as BoI), but I believe the entire game is the metaphor, not just the individual items and monsters, although there are certainly some important things….

If you are thinking of the toy chest, then you’re onto where this is going.  I’m going through a lot of Isaac, so I’ll just say **SPOILERS** here and not do it every time I bring up one of the thirteen endings. Binding of Isaac is about a child’s emotional journey towards deciding to get in the “box.”  Many people try to decide what is “real” in BoI, and I think the game is indeed split physically and metaphorically.

The toy chest is the “box” metaphor, and the 11th ending is Isaac getting in.  Sure, maybe this “really” happens in the game, but it is also symbolic of Isaac’s mind retracting from reality and into his “box.”  Whether he physically gets in and actually dies there is (sadly) less important in my opinion, but it certainly tells the story of how Isaac physically hides in the chest to escape the physical threat of his mother.

Metaphorically, his mind creates an alternate reality to hide in to escape the emotional threats.  The ??? Blue Baby could be either interpreted as physical death by asphyxiation or metaphoric death through detachment from reality; the actual character is Isaac’s dead body.  It is named ??? because it is a glimpse of reality that Isaac’s fake world (where Judas, Eve, Cain, etc. all exist) doesn’t recognize.  McMillen emphasizes how the game is open to interpretation and I’m trying to nail what his inspiration was for the overarching metaphor.  The life events leading to Isaac getting in the box are what McMillen refers to as being open to interpretation in my opinion, through the items received and the Mom subplot.

The items received and the dreams Isaac has in between levels all depict things like child abuse, shame, and neglect.  Most everything else has a religious connotation to it, and how Christianity fits in and makes sense. McMillen always said the game wasn’t meant to bash it, but rather to use it as a catalyst.  Christianity is based around an idea that mankind is naturally sinful.  In an impressionable, already fractured mind, this leads to believing one is unconditionally sinful and they become more assured that they cannot escape through further exploration.

This fills Isaac with shame and fear as depicted by his reading of the Bible in ending 12.  He sees himself as a demon in the mirror, then looks over at the chest appearing sad.  It’s not really meaningful whether religion was what filled Isaac with shame, embarrassment and a lack of self-acceptance, but rather it is possibly the best metaphor for one believing that he or she should be ashamed just for being human.  Ending 11 is confirmed to happen after Ending 12 and it is Isaac approaching the box, flashing through all of his made-up characters, then climbing in.  It’s important to note ??? is not flashed though because it is a symbol of the real world and not an actual part of Isaac’s created mindtrip; ignoring it is part of his denial.

The basement and the monsters are all part of the world Isaac has created for himself.  All of the abuse items and references are possible examples of the lifestyle that leads to the breaking of a child’s mind and their retreat into the “box”.  Everything is terrifying, but by using items Isaac has encountered throughout his life of abuse as well as powerful religious items, he can overcome his tribulations and be the hero.  The fact that there are monsters is consistent with Aether, where the boy meets a scary monster, but they still become friends. This is a statement that even a perfect escapist reality doesn’t necessarily mean perfect imagery, rather one full of creativity and abstractness patched together from what one’s mind has had access to in their warped life.

In the real world, Isaac reads the Bible, confirming to him that he is inherently sinful.  In his own world of creativity, he can destroy Satan, causing him to his own world. He then gets into the toy chest, effectively comprising the game’s “real” physical  ending.  Killing Angel Isaac is representative of Isaac destroying what is left of his view on true reality.  The boss starts as plain Isaac, but becomes an angel, then ascends to heaven as you do more damage because Isaac further enters a deeper stage of denial. Bringing the polaroid to Angel Isaac is a reinforced symbol of the real world, which pulls Isaac out of his fake world realizing that, in the real world, he is physically and metaphorically dying in both the the physical toy chest and the metaphorical “box” (respectively).

Angel Isaac thus becomes reality, the ??? Blue Baby (dead Isaac), and the real final boss.  Isaac gets the chance to overcome reality one final time so he can remain in his box and relive his world over and over again as you, the player, will start another run.  Each time you “win”, you make it to the toy chest, meaning you’ve defied reality yet again and made it back to the “box.”  The first several endings are considered “wins” because you make it to the chest, which contains more items that add to Isaac’s escapist reality, allowing him to return to a world with even more options that make him strong.  My individual boss interpretations may be way off, but I think the core concept of the main game remains strong.

The Binding of Isaac?  Yes, Isaac is Binding his own mind to shield it away from further damage by descending into the basement. The basement is his own world, just like The Basement Collection is a compilation of McMillen’s own creative world.  With this perspective on the game, I no longer have speculation about Isaac’s father, or aborted siblings, or whether he is the product of a failed abortion, or whether his Mom abuses him, or whether his Mom actually wants to kill him.  The real point is that his perception of reality is becoming distorted and we are playing through it as he retreats.  The damage that brought him there has already been done and there doesn’t necessarily need to be a “correct” interpretation of these items representing it.

A beautiful arc of one’s abused and manipulated childhood is signified by the items in Binding of Isaac – next the actual creation, and decision to enter, the box as told by the actual Binding of Isaac game and endings. Aether is about one’s life in the box and how wonderful and creative it is, but is accompanied by complete disconnect from the real world. Time Fcuk depicts how one can remain in the box into adulthood, but there is the possibility of escape only if different perspectives on life are taken.

tl;dr: Kids with shitty lives make up fake, creative worlds that they can get forever trapped in.